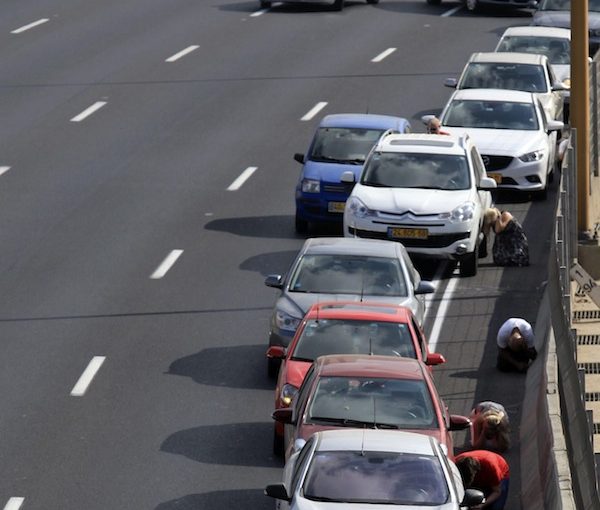 Part 1 of a three-part series, in which the author shares his diaries from the homefront, providing a glimpse of daily life under missile threat during Operation Protective Edge in 2014. For Part 2, click here; for Part 3, click here.

Naïvely, I disassociate the unraveling events from the grisly murders of teenagers Gilad Sha’er, Eyal Yifrach, Naftali Fraenkel. Then the murder of teen Muhammad Abu Khdeir. Gripping the country in horror, fear and dismay. I hope a sense of normalcy will prevail.

It doesn’t. Last evening was disrupted by 15 rockets fired over Rehovot, my little shtetl. Our Iron Dome intercepted several of them. The rest missed their targets, falling into open land. Two hundred missiles fired at Israel over the past week.

The attack took us by surprise. Pizza ordered, my son just finished his shower, my daughter hanging in her room, which doubles as our reinforced shelter. The siren sounded. Together with our dog, we ran to join my daughter in her room. A bit invasive to a teen. But she forgave us.

I took a few extra seconds. I had 30, after all. Grabbed a large bottle of water, some chocolate, a few asthma inhalers. “Dad! Get your ass in here!” my son shouted as I was scouring the kitchen for more goodies.

Then. All clear. We left my daughter’s room. I mean, the protective room. The doorbell rang. Pizzas here.

Amazed the delivery boy was still doing his rounds. I admonished him for not seeking shelter. He says he waited out the attack in our stairwell (also a reinforced area). Quite impressed with his delivery skills, gave him a large tip. The pizza arrived in less than 30 minutes, as advertised. Great job.

Went to bed a few hours later. My daughter had a difficult night. Couldn’t fall asleep and came into our room a couple times. Did our best to comfort her. But what can we say? We were attacked with missiles.

We promised our daughter she wouldn’t have to stay home alone, that she could join me at work. Not sure this was a wise promise. My office is located more south. My big worry – the drive to work. Driving there, I imagine myself in an episode of Wagon Train.

Looks like we are moving into a major ground offensive. A pending call of up to 40,000 reservists. Imagine the impact this will have on our economy, on our society. Fortunately, my son’s army duty is two years away. Somewhat reassuring, but not much, as these operations tend to repeat themselves every couple of years.

Visited our safe room twice last night. Hamas fired missiles as far north as Tel Aviv. Even targeted our capital. Didn’t expect such a quick escalation. We responded. Pounded 150 targets inside Gaza. I pity the poor Gazans suffering the slings and arrows of their leaders.

Heard another siren while walking my dog this morning. Poncho and I ran to the nearest shelter, the stairwell of a neighbouring building. Waited the mandatory 10 minutes with a mother and her child. Adding to an already complicated situation the child had cynophobia – started panicking at the site of my dog. Poncho and I chivalrously moved one floor up.

Poncho also feels the stress. Waiting in the stairwell, amid the booms and sirens, he started crying, pawing me.

I think about my son and his friends, who have a trip to Eilat planned for tomorrow. They are debating whether to go. Tough call. My wife and I also are struggling with this. That dang security factor! But there is also the heroic, stoic pizza delivery guy message. Life in Israel.

Operation Cast Lead cost $50 million a day; total cost, one billion bucks. Pillar of Defence cost $2 billion. Where is this money coming from?

We’ve destroyed more targets in the last 36 hours than in all of Operation Pillar of Defence.

More than 90 missiles were fired at Israel yesterday. Thirty were struck down by the Iron Dome. Rehovot was pretty quiet, with only one evening siren. I was home alone while my wife and kids were at the mall, which they said was totally empty. So, why were they there? Great question. One I ask every time they’re at the mall. Missiles or not.

Yesterday, we received an automated call from our mayor. Rehovot, along with other southern municipalities, has declared a state of emergency. Not sure what this means. Think we need to stay within 90 seconds of a protected space. Try factoring that into your busy day!

Morning papers filled with instructions on how to stay safe. Definitely a well-prepared country with this sort of thing. Facts speak for themselves. No casualties, despite more than 300 missiles fired at us since hostilities broke out.

My gym routine at work was disrupted by a double siren (one after the other). While waiting in the protected area, I positioned myself for a dash to the bench press once the all clear was sounded. Priorities!

The situation was becoming routine. How quickly we adapt. Calling home, I asked the standard questions. What’s up? What are you doing? What’s for lunch? Any missiles? Reading your book? A totally ordinary conversation.

My son and his friends went to Eilat, which is outside the battle zone. So, in the meantime, just the regular parental worries for a vacationing teen.

On a patriotic note, I hung a flag on our balcony today. Nothing like a good war to bring out the blue and white in me.

That night, the 1970s comic strip Love Is came to mind. Discovered a new one – love is … being alone with your wife in a bomb shelter.

A siren went off this morning while I was driving to the supermarket. Always dreaded being in a car during a siren. Seems the least safe place. There I was at an intersection, a little jittery, looking for a place to pull over and exit the car – then run for fortified cover … or lie down with my hands over my head. Spotted a place just down the road. Reminded myself I had 90 seconds to get to relative safety.

The red light took forever to change. Waiting. Waiting. Waiting. Green! A car zoomed out from behind. Cut me off. Took my coveted spot. Dang! Most drivers stopped on the spot, like when the sirens sound on Remembrance Day, so I did the same. Then bolted from my car. Crouched down. Put my hands over my head and hoped for the best.

Crouching next to me was the guy who cut me off. He also didn’t get to “the spot” in time. He apologized. We exchanged pleasantries about the unpleasant situation. And then, moved on.

What’s with the covering our heads with our hands stuff? Will that protect us from burning debris falling from the sky? I told my daughter I’m going to start driving around with her bike helmet. Though not a bad idea, it was quickly nixed. If I did that, she warned, she’d never drive with me again. Too embarrassed I guess. Teens. Even during war. Go figure.

Yesterday afternoon, the Iron Dome intercepted several missiles over Rehovot. Parts of the Weizmann Institute of Science were covered with bomb fragments. Especially by the pool. The lifeguard had ensured the kids were out of the water and ushered to safety. A miracle no one was hurt. One panicked child ran back to reclaim his sandals. The lifeguard ran after him. Unable to drag him back in time, he covered the child with his body. Bomb fragments littered the ground around them. Another Israeli hero. Like the pizza delivery guy.

A missile was fired towards the Upper Galilee from Lebanon this morning. We fired back. Hope our Lebanese friends are deterred. Certainly prefer not to open another front.

Trying to keep a normal routine. Went to a matinée today. Still planning our summer vacation. Busy with work. Busy at home. Baking chocolate chip cookies. Watching Friends reruns. Doing everything with this horrendous situation in the background. Or the foreground.

A bit despondent today. Want this to end. But what’s the end? What about the economic fallout of a $2 billion bill? What about the political and diplomatic fallout? Waiting for some good news.