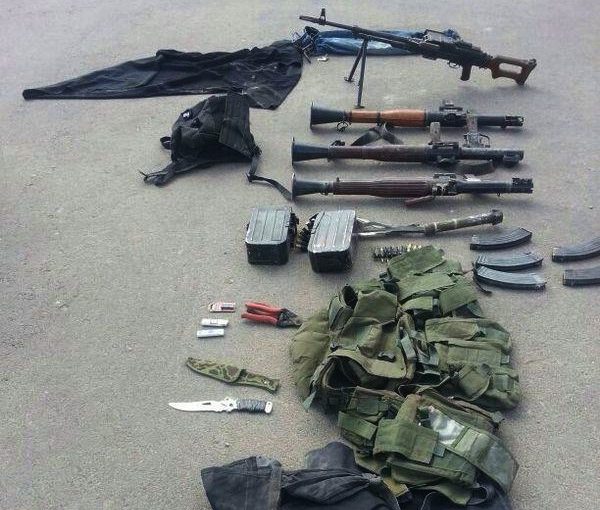 Weapons seized from terrorists who infiltrated Israel through an underground tunnel to carry out a massacre in an Israeli community. This photo was taken on July 19, 2014. (photo from flickr.com/photos/idfonline)

Part 2 of a three-part series, in which the author shares his diaries from the homefront, providing a glimpse of daily life under missile threat during Operation Protective Edge in 2014. For Part 1, click here; for Part 3, click here.

Day six. Woke up at 4 a.m. Browsed the headlines on my smartphone. Some talk about talk about considering talk about a truce. Fell back asleep. Rudely awoken at 6:11 – I angrily checked the time – by a siren. Incoming. So much for all the talk. My wife and I groggily made our way to our daughter’s room, our protective room.

Son Dor is enjoying Eilat. Returning by bus this evening. Maybe it makes more sense to take the afternoon bus. Think the skies are quieter in the daytime.

Sides still too far apart for a truce.

When Prime Minister Netanyahu talks about a long-term truce, what does he mean? With my son going into the army in two years, I don’t want another ceasefire like we had in 2008 and 2012, which allowed Hamas to rearm and wage new wars so soon after. Not acceptable. Our cabinet reconvenes today to further consider a ground offensive. What a job our prime minister has!

So much damage in Gaza. How can Hamas not cry uncle? Despite its macho threats, its salvos of rockets – more than 100 fired over the weekend – the impact to Israel is minimal. Largely due to a poor-quality arsenal. The constant pressures of our offensive. Our amazing Iron Dome. And the well-prepared and trained homefront (that’s us!).

Ceasefire to take effect at 9 a.m. Final terms to be agreed. Somewhat ass-backward. Shouldn’t terms be agreed first? What do I know? Hope it brings quiet. Peace.

Gazans needs new leadership. The classic choice of guns or butter, they need to decide if they want to continue being human shields in a war they cannot win.

My son returned from Eilat. Without incident. With a great tan and funny stories. But frustrated. Tossing the morning newspaper aside, he growled, “We’re crushing them. We need to continue until they are clearly defeated! This truce is bullshit. We’ll only face more missiles next year. You don’t stop when on the verge of victory. It allows your enemy to retrench and rebuild.” The rashness of youth has a point.

I left for work with a delicate sense of calm. Maybe I can worry less today. Alas, an hour into the ceasefire, missiles were again fired at Israel. Errant missiles? Or continued, self-defeating defiance by Hamas? Previous operations also had a number of false truces. Then there was quiet. To paraphrase from Sting, I only hope the Gazans love their children, too.

But another beat prevails. More and more missiles fired by Hamas since the ceasefire went into effect. The kids, alone at home, went scurrying to our safe room for a third time in the last hour.

From her Tel Aviv office, my wife sounds somewhat flustered. A mother’s distress. Loud booms heard overhead from the Fab in Kiryat Gat. My daughter called from the protective room. Safe. Frustrated. Not understanding what Hamas doesn’t understand about a ceasefire.

In the meantime, Israel is holding its fire. Hoping for the best. Preparing for the worst.

Anyway, I need to complete a report for work.

The war continues. The truce that wasn’t never took hold, despite Israel’s willingness. We’ve agreed to a five-hour unilateral, humanitarian ceasefire, to give Gazans a respite. Effective 10 a.m. today. We continue building our military reserve – 50,000 soldiers patiently await their orders.

We thwarted an infiltration. Thirteen terrorists heading towards a border community through an underground tunnel were stopped.

We continue rendering the Hamas war machine ineffective, while Hamas continues to subject Gaza to suffer Israel’s might. Uncertain where this leads.

Received a pretty frantic call from my wife and son. On their way to Tel Aviv, they witnessed an Iron Dome sound and light show – we shot down four missiles. They could almost feel the heat of the sky-high blasts. Scattering out of the car, they held each other as they ran for cover in a nearby shelter. Talking to me, their voices a mixture of exhilaration, excitement, fight. Then they continued their drive to work.

The true hero of this war is the Iron Dome. Probably one of the greatest military defence breakthroughs of the last hundred years. Can’t imagine the situation without it.

Fearful. Hopeful. Last night, at 10:38 p.m. (precisely), Israel embarked on a long-anticipated ground operation. For peace. I am fearful for our sons, brothers, fathers, some sisters, too. Trusting our nation will soon hammer Hamas’s swords back into plowshares (Isaiah 2:4).

We fell asleep around midnight, huddled in our den watching nonstop news. Reporting was spotty. Events happening very quickly. Full disclosure not a privilege. Lots of uncertainty – that word again – adding to fears and hopes.

Also concerned about our neighbours in Gaza, caught in the crosshairs of Hamas insanity. I like to think the majority of Gazans are innocent pawns, fiercely used by Hamas to terrorize Israel with crude and indiscriminate missile attacks. Israel makes a clear distinction: this war is with Hamas, not Gaza.

Hamas waited not a second after the humanitarian ceasefire ended to resume its barrage of missiles. They also fired a few during the ceasefire.

Updated my smartphone. Another brilliant Israeli application. Designed under extreme pressures. Called Code Red. Brilliant. Beeps with every missile attack, even advising the location. Seems everyone downloaded this app – the office can be quite noisy at times.

Went to Tel Aviv with the kids for lunch yesterday. Needed a break from our pressure-cooker existence. We hung out along Rothschild Boulevard. Lots of cool cafés and shops. With 50,000 reservists down south fighting for our security, quite a contrast.

There was a missile attack as I was leaving Rehovot this morning. I was outside the mall – running a quick errand – so sought cover in a doorway with five others. My daughter home alone. Called her. Asked if she wanted to come with me to work. “No, Dad, I’m fine. Be careful.” How quickly they mature.

My son is still going out evenings with his friends. I’d prefer he stay home, but teenagers will be teenagers, even in wartime.

Yesterday was a tragic day for Israel. Thirteen of our best, killed defending our country. Now 18 soldiers killed since the start of hostilities. A collective weeping. Each soldier someone’s child, sibling or parent. Taken from routine to defend life and country from this insanity from Gaza.

Again, Israel found Hamas terrorists attempting to infiltrate the country from their tunnels of hell. Intending to carry out a terrorist rampage in one of our border communities. Targets not soldiers, but innocent, unsuspecting families. Grandparents. Children.

Israel goes to great lengths to protect civilians in Gaza. When Israel targets terrorists hiding and firing from a civilian building, it first warns the local population by dropping leaflets, blaring the message on loud speakers, even making phone calls and sending text messages. Or, does a “knock on the door” – shoots small, precise, non-explosive ordinance at a roof to urge inhabitants to vacate before attacking. Israel aborts an attack if noncombatants are in harm’s way.

Hamas has different values. Not rational. Not humane. They urge and sometimes force Gazans into targeted areas. Hamas counters Israel’s pre-attack announcements by threatening retaliation, even execution, to those who heed the warnings. Hamas strategically locates command-and-control operations within hospitals, schools, mosques. This is their defensive shield. As our prime minister said, “They don’t give a whit about the Palestinian people.”

Our war is not against the people of Gaza, but against the terror organization ruling and subjugating Gaza – Hamas.

A mother was quoted today: “Knowing my son is entering this strip of land governed by such demons is frightening enough. Aware that he is doing so with a weapon in one hand and a law book in the other – representing the Israeli approach to asymmetrical warfare – is beyond my capacity as a mother to bear. Israeli parents, famous for over-protectiveness at the playground, must make their peace with such parental cognitive dissonance. It is a feat I wish on my enemies. Only then will there be hope of genuine coexistence.”