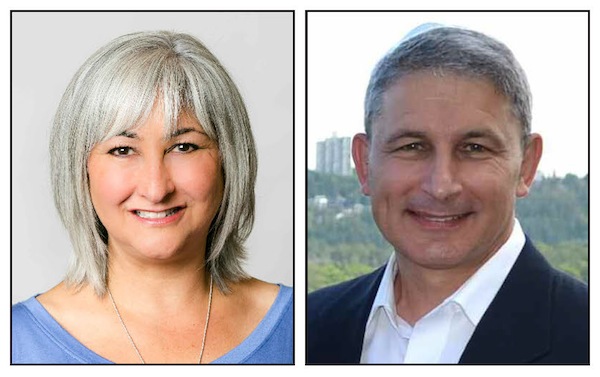 For many years, Vancouver has been home to North America’s largest celebration on erev Yom Ha’atzmaut. While Israel’s Independence Day is marked in many cities around the world, Vancouver is unusual in that it marks the occasion on the day it occurs – many bigger communities celebrate on an adjacent weekend or later in the spring. The event is usually the largest Jewish community gathering of the year in British Columbia, which is a statement about the connection between Vancouver’s Jewish community and the state of Israel, say organizers.

Last year, with the pandemic declared mere weeks before Israel’s anniversary, the tough decision was made to cancel the local event and join an international celebration convened virtually by Jewish Federations of North America.

While Pamela Wolfman, chair of the Yom Ha’atzmaut committee of the Jewish Federation of Greater Vancouver, wishes the community could come together in person, being online does have a silver lining – it allows the program to be more expansive. Every Yom Ha’atzmaut features an Israeli musical performer or group. This year, the committee has arranged for five performers who have joined the Vancouver celebrations in years past to return in a virtual “best of” concert.

“We decided to bring back five of the favourite artists from recent years who performed here already, so they already had a connection with Vancouver, they’d already visited us and gotten to know us and vice versa,” said Wolfman, who has chaired the event since 2014.

She credits Stephen Gaerber, who preceded her as event chair, and his brothers and father, as the impetus for the focus on Israeli talent at the annual get-together.

“Our community really responds to that,” said Wolfman. “A majority of our community really does feel connected to Israel, wants to celebrate all the positive things about Israel. We want to take a break from the news and we want to celebrate Israel, the miracle of Israel – Israeli art, Israeli culture, Israeli music – and to do that together is just really fun for everybody, really positive.”

Wolfman herself became involved via an earlier involvement with Festival Ha’Rikud, the Jewish Community Centre of Greater Vancouver’s festival of Israeli dance for young people. Since the festival began 18 years ago, the kids have participated in Yom Ha’atzmaut celebrations every year.

“This year, especially, there’s a lot to celebrate, with everything positive that’s going on with Israel … with the Abraham Accords, with the vaccine rollout, it’s a really good year to get together and celebrate – and lots and lots of great music has come out of Israel this year, too.”

In addition to the “five favourites,” Wolfman promises “cute kids and a few surprises.” Lu Winters and Kyle Berger will emcee, and keep an eye out, as well, for many other familiar faces, as scores of community members have come together virtually for a community song – the iconic 1970 Israeli ballad “Bashana Haba’ah” (“Next Year”).

Since the community event always sells out, this year’s virtual version will turn no one away – plus, it’s free. (Donations are welcome during registration at jewishvancouver.com. Food can also be ordered online via links at the same time.)

There can be no Yom Ha’atzmaut without Yom Hazikaron. Israel’s Independence Day is celebrated the day after Israel’s national day of remembrance for those lost defending the country or killed in terror attacks. This year’s commemoration of Yom Hazikaron will also be online, but the committee, led by Geoffrey Druker, has experience at a virtual version of the solemn commemoration – they delivered a virtual commemoration last year.

Like Yom Ha’atzmaut, Yom Hazikaron holds a special place in Vancouver’s Jewish community. Many other cities in North America mark the occasion, but ours is somewhat unusual, said Druker. Gaby Peled, an Israeli-Canadian who passed away in 2019, was pivotal in structuring our commemoration along the lines of the Yom Hazikaron he knew on his kibbutz, Givat Haim.

When Druker, also from Israel, arrived here in 1988, he was surprised to discover how many members of the Vancouver Jewish community had lost loved ones – family and friends – in Israel’s various conflagrations. A slide show every year remembers the individuals who are connected to British Columbians – and, every year, more faces are added. Often, local people have not shared their stories of loss, and so, as they come forward with their experiences with bereavement, their people are added to the ceremony. Druker invites anyone to contact Federation to add a loved one to be acknowledged and mourned communally.

This year’s gathering will share the story of, among others, Shaul Gilboa, a pilot shot down in 1969 and a cousin of Vancouverite Dvori Balshine. Shimi Cohen will remember his brother, Shlomo Cohen, by reciting Yizkor.

“The ceremony itself is for the bereaved families,” Druker said. “That’s how I see it. We want to remember their loved ones and we want to give them a community hug to recognize their loss and their pain. Everything is geared toward that.”

The virtual format does not allow the person-to-person interaction that a regular gathering does, where people can share condolences and commiserate, said Druker. But virtual is absolutely preferable to no commemoration at all.

“It’s a significant date for many,” he said, “so that’s why we have to keep going.”

To join the ceremonies, visit jewishvancouver.com.