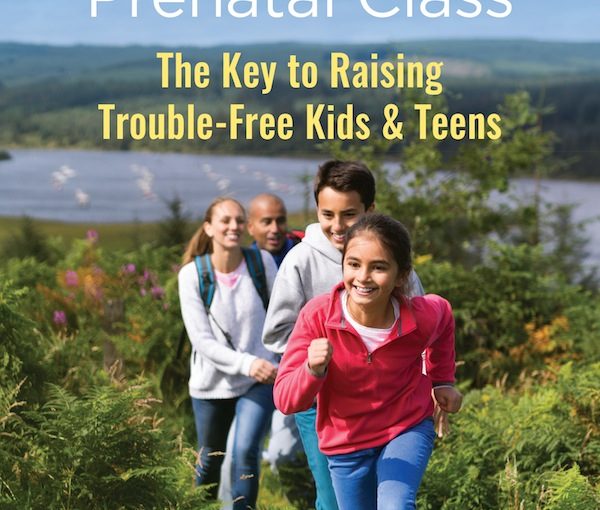 Most of us are familiar with the concepts of “inherent worth” and “unconditional love.” But many fewer of us actually live by these precepts. Anne Andrew would like to help change that fact. She does this in her work, as well as in her new book, What They Don’t Teach in Prenatal Class: The Key to Raising Trouble-Free Kids and Teens, the launch of which takes place April 11, 2 p.m., at the Isaac Waldman Library at the Jewish Community Centre of Greater Vancouver.

In the introduction, Andrew shares, “My experience as a worried parent of a once-troubled teenager (now a well-functioning adult) and my wish to help other parents avoid the sleepless nights, debilitating fear, helplessness and despair, led me to write this book. Our family’s ordeal lasted more than six years and, during that time, we learned strategies that not only helped us survive but actually allowed us to thrive…. At the same time, I was working as a school principal and became aware of the mental health crisis that was starting to take hold in younger and younger students.” As examples, she notes that 77% of children report having been bullied at school and 80% of 10-year-old girls wish they were thinner.

Andrew was a school principal at Temple Sholom for 20 years. “It’s likely,” she writes, “that one or more of your children will face some kind of difficulty, whether it’s an eating disorder, bullying, drug addiction, depression or other mental health issue, and it is almost impossible to predict whose child that might be. You can’t always see it coming – we certainly didn’t!”

Based on what she was learning from her family’s therapist, Andrew “concluded that there is an absolute and fundamental concept that underpins healthy human life.” That concept – inherent worth – is the subject of the first section of What They Don’t Teach in Prenatal Class. Part 2 focuses on unconditional love, explaining “why it is so difficult for us to accept and own our inherent worth, then explain[ing] how this can be done and become part of your ‘way of being.’” The third part of the book discusses parenting priorities, “kindness versus grades,” and “teaches how to parent out of love – not fear.”

While targeted to parents, What They Don’t Teach in Prenatal Class is a valuable guide for anyone who has negative opinions about themselves, which, to hazard a guess, is the vast majority of us.

“Part of the reason that I named my book the way I did is that it would be ideal if parents did some of the self-work ahead of having children,” Andrew told the Independent. “That way, they’d be better prepared to face the challenges of parenting and they would have a deeper understanding of how their children pick up negative beliefs right from the beginning. They’d have a bit more time and space to think clearly about the bigger picture in terms of purpose and priorities before the baby arrives. Imagine if prenatal classes included a few sessions on this topic!”

One of the tools Andrew presents in her book is the Choose Again Six-Step Process, which was developed by Diederik Wolsak, founder and program director of Choose Again Attitudinal Healing Centre and author of Choose Again: Six Steps to Freedom. Wolsak wrote the foreword of What They Don’t Teach in Prenatal Class. In it, he notes that Andrew – who is a Choose Again facilitator – “has written a manual which draws directly from her own heroic and victorious battle with depression and her transformation of some crippling core beliefs. But, more to the point, it tells the story of two people, parents, coming to terms with what they needed to heal to become real parents. Real parents teach by demonstration. Real parents are transparent and not afraid of what they’ll encounter when they begin their own journey to removing all barriers to love.”

By healing a negative belief about ourselves, we can change our behaviour. “By following our familiar feelings, we can retrieve early childhood memories in which we can discover the genesis of our beliefs and we can begin to transform them,” writes Andrew. “You have to be in the feeling for it to work – it is a process that has to be felt, not an intellectual exercise.” In brief, when you’re upset, for example, acknowledge that you’re upset; take responsibility for the feeling – it is not your child’s fault, but rather “a negative belief that you made up in early childhood has been triggered”; focus on the feeling and identify it; remember the feeling and try to determine when you first ever felt it; once you have that memory, contemplate how you judged yourself in that moment and how you thought others judged you; and, lastly, try “to fix your mistaken belief by a process of forgiveness that replaces your mistaken belief with the truth of you – that you are inherently worthy, whole and complete.”

If loving ourselves isn’t hard enough, parenting out of love, and not fear, is as much or more of a challenge. Not blaming your children for your anger, not punishing them for acting out, etc., would seem to require infinite patience and constant self-awareness.

“If people read my book and are feeling overwhelmed, then I would say do one thing, and that is to have a gratitude practice,” said Andrew. “I have a section in the book on exactly how to do that and I know that it’ll make a huge difference. Begin with one thing and then perhaps add another.

“Awareness is half the battle, so simply being aware that young children are developing negative beliefs about themselves will be helpful in the ways you respond to your child’s behaviour. I’ve presented the concept of inherent worth as the antidote to all of these beliefs, so I have actually simplified parenting into one challenge – how to get across to our children that they are inherently worthy beings. They don’t have to establish their own worth by getting good grades or winning competitions. I’ve suggested several techniques, so parents just need to adopt the ones that will work for their family.

“Many of the things that I suggest are simple, such as remembering to smile at your children more often – put a smiley face sticker on your phone, on the fridge or on the bathroom mirror to remind you. Mindfulness can be practised at the dinner table or getting ready for bed by helping children focus on their senses in the here and now.

“Parenting is a marathon, not a sprint,” she continued, “and it is OK to take awhile to get into the stride, stumble and get back up. Parents tend to judge themselves rather harshly (we all do!) and that’s not helpful. Be gentle with yourself and know that it is impossible to make a mistake – we make healing opportunities for ourselves and our children!”

Andrew invites “parents to use the day-to-day parenting upsets as portals to self-healing so that parenting becomes a journey into self-awareness. This in turn benefits the kids enormously. When parents heal their own negative beliefs, they won’t worry about being judged by others, they won’t be drawn into competitiveness and will not need to over-program their children, so that makes life and parenting less stressful and more fun for the whole family.”

Andrew is a parenting coach, and she presents workshops in the United States, Canada and Europe. She said parents take what they can from her recommendations.

“Parents who have taken my workshops, on which my book is based, report that they have more patience, greater understanding of their children’s behaviour and their own, and the ability to communicate more effectively with their children as well,” she said. “I have been told that the methods are transformational and that was certainly my experience. One parent (Roanna Glickman) told me that she dived headfirst into self-healing using the Choose Again Six-Step Process and she has transformed her life and her kids are thriving as a result. She said, ‘It may seem like more work initially but, when you take away the power struggle, it’s way less work in the long run.’”

Andrew shared feedback from another parent, Pam Roy, who said, “Parenting isn’t about trying to do it right but about learning along the way, being authentic with your kids when we don’t get it right; making yourself better helps you be more present and aware with and for your kids.” While acknowledging that self-work is time-consuming and difficult, Roy said it is crucial and, if Andrew’s suggestions “feel overwhelming or time-consuming, that should trigger that there’s work to be done. Change aversion is there but, when these fears come up, it’s the more reason they should be looked at.”

One of the more surprising pieces of advice, perhaps, is to be careful with praise. “How many of us do what we do to win approval from our bosses, peers, spouse, other family members and even our children?” writes Andrew. “When that approval is not forthcoming we beat ourselves up wondering what we did wrong or reminding ourselves that once again we failed.”

As to how to reduce our dependency on external validations of our worth, Andrew told the Independent, “Firstly, I suggest you gradually phase out praise – it tends to be a habit so takes awhile to correct. Notice when you automatically use praise and then follow it up with a question that indicates your sincere interest in whatever it is that was praised. Praise-dependency tends to undermine the concept of inherent worth – it encourages kids to look outside themselves for their worth.

“As far as knowing how to handle praise and criticism, knowing one’s inherent worth is the way to handle praise and criticism. Neither praise nor criticism has an impact on one’s inherent worth, though it may have an impact on self-esteem. Criticism says more about the person doing the criticizing than it does about the one being criticized. Children can be taught to just say ‘thank you’ to anyone who offers them criticism (or praise for that matter). The criticism can be taken for what it is – a neutral fact to be examined or ignored – not an emotionally charged thing.”

If you can’t make the April 11 launch, What They Don’t Teach in Prenatal Class is available on Amazon, and Andrew is currently putting her workshops online so that parents can access them more easily. She said they should be available in May or June at anneandrew.com.