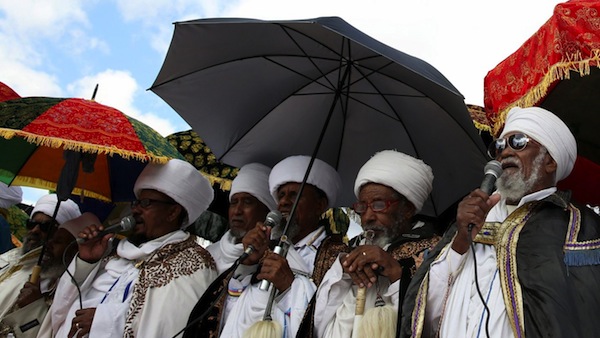 Approximately one-third of Israel’s 125,000-strong Ethiopian Jewish community came from across the country on Nov. 27, the 29th of Cheshvan in Judaism’s lunar calendar, for the festival Sigd. The mass clan gathering takes place 50 days after Yom Kippur, just as the holiday of Shavuot is celebrated 50 days after Passover.

Sigd, derived from the Hebrew word for prostration sgida, celebrates the renewal of the covenant between God and the Jewish people that followed the return of the Jews to the Land of Israel from the Babylonian exile 2,600 years ago, as described in the biblical book Nehemiah.

The central event of the Sigd celebration was the priestly blessing by the kessim (spiritual leaders) in Geez, the sacred language used by Ethiopian Jews in their liturgy. Amharic, their traditional language today, has been widely displaced by Hebrew. Standing on the Haas Promenade in southern Jerusalem overlooking the Old City of Jerusalem, the priests wore traditional clothing and carried parasols.

Prior to being rescued from persecution and poverty in Africa in a series of military and espionage operations, including Operation Solomon in 1991 and continuing until today, Ethiopian Jews would ascend mountain tops above their villages in Gondar province for a mass Sigd prayer expressing their yearning for Zion. In Israel, the holiday has morphed into a day of thanksgiving for their rescue, as well their gratitude for the Torah and their cultural heritage, and most Ethiopian Jews under the age of 40 living in Israel only know those stories from their parents’ recounting. Children were not included in the Sigd observances in Ethiopia, both because of the difficulties of making a three-day trek up a mountain and to preserve the solemnity of the day.

Mingling with the colourful costumes and umbrellas of the older generation are the uniforms of the hundreds of Ethiopian men and women serving in the IDF. With the autumn temperature still summer-like, many youth are wearing skin-tight clothing that would have scandalized their elders in Ethiopia.

Among the elders is Rabbi David Yosef, a silver-bearded kes wearing a crocheted kippah, who explained how Sigd fits into the life of Ethiopian Jews.

The ancient community, which may date back to King Solomon and his dalliance with the Queen of Sheba 3,000 years ago, became cut off from mainstream Jewry, he says. More historically, Jews lived in Ethiopia from before the destruction of the First Temple in 586 BCE when the Babylonian conquerors of the Holy Land arrived. Driven into exile, these Jews considered themselves to stem from the tribe of Dan, one of the 10 lost tribes. Many were compelled to convert to Christianity in the 19th and 20th centuries but the community continued to dream and pray for a return to Jerusalem.

Starting in 1973, Ethiopian Jews suffered terribly under the dictator Col. Mengistu Haile Mariam. When Israel became aware of their plight, significant investigation and research was done, leading to a rabbinic ruling that accepts the Ethiopian Jews as part of the Jewish nation, entitling them to immigrate to Israel under the Jewish state’s Law of Return. That paved the way for 8,000 Ethiopian Jews to move to Israel. But then Mengistu forbade Jews to leave the country, and that led to the decision to covertly bring them to Israel. The 2019 Netflix movie The Red Sea Diving Resort recounts one of the Mossad’s rescue operations.

Nevertheless, some Israelis disputed the Ethiopians’ status as Jews. Rav Yosef carefully explained the Ethiopian Jewish engagement and wedding ceremonies and asserts that their practice conforms to the mishnaic description in Tractate Kiddushin (part of the Oral Law) of what constitutes proper Jewish betrothal. The community has always preserved its ritual status as Jews, he insisted.

“We missed Jerusalem for thousands of years,” he said. “Today, in Jerusalem, we celebrate … but, just as we say ‘Next year in Jerusalem’ at the Passover seder, so, too, at Sigd, we pray for a rebuilt Jerusalem.”

For Ziva, a 20-year-old from Ashkelon with braided hair, the Sigd celebration is a significant milestone. “I feel like it’s a day of unity for us,” she said.

For the young woman, who arrived in Israel with her parents 12 years ago, the observance of the ancient holiday reminds her that “there’s so much to remember.”

The rabbi asserted that it was crucial for broader Israeli society to understand the Ethiopian Jewish community’s heritage and that it is an integral part of the Jewish people because of the “difficulties” the community has experienced in Israel.

The Ethiopian community has frequently complained of discrimination and racism against it and, in particular, has suffered from over-policing and a disproportionate number of arrests and indictments relative to its size. The recent death of Solomon Tekah, killed by a ricochet following an altercation between a group of youths and a police officer, led to renewed claims of police brutality, as well as protests and riots by members of the Ethiopian community. A previous bout of protests was sparked when video footage emerged of police officers beating an IDF soldier from the Ethiopian Jewish community.

“As you know, in recent years, the Ethiopian Jewish community has had difficult experiences, because people do not know and do not appreciate what Ethiopian Jews went through, and looked at things which are not relevant, such as differences in place of origin, but not the internal aspects of Ethiopian Jewry,” said Wabshat. “The Sigd holiday can bring people to the understanding and recognition that Ethiopian Jews are of the same flesh as all Jews around the world and, when the state recognizes Sigd, as it has, it means that we can all be one people.”

Among the kessim who participated in the prayers was Kes Mentasnut Govze from Beersheba. He explained how, in Ethiopia on Sigd, the Jewish community would travel to and ascend a mountain to “pray to God as one people with one heart that we would reach Jerusalem the next year and that the Temple would be rebuilt.”

Govze noted that, although the community has now reached Israel and Jerusalem, the Jewish people’s mission is not yet finished. “We still have not built the Temple and we must be clean,” he said. “If we go on the correct path, the path of the Torah, God will help us, we will build the Temple and bring the sacrifices.”

Member of Knesset Pnina Tamano-Shata described the holiday as “a big gift for Israeli society” since, she said, it could help unite the Jewish people. “It is so wonderful to see so many people here who are not from the Ethiopian community, and this holiday has become a holiday for all the Jewish people,” she said. “It is celebrated in kindergartens, schools, in the army, in local authorities, and the message is that this story is your story, it’s my story, and the story of all Jews, whether from Europe or from Arab countries.”

The MK said the identity of the Ethiopian Jewish community was strong, but noted the problems it has faced, including “difficulties which are connected to Israeli society, such as police violence, discrimination and racism,” but said the community has remained positive.

“We are positive and fully open to Israeli society, we are not in a place of antagonism, even though we have had a very hard, challenging and intensive year, and we are far from getting justice; nevertheless, everything has its time and period,” she said.

Michal Avera Samuel, director of the nongovernmental organization Fidel (Association for Education and Social Integration of Ethiopian Jews in Israel), said the thousands of people who came to the celebrations in Jerusalem came “to learn and understand the heritage of Ethiopian Jews, which is an ancient heritage, which every child should be proud of and pass on to the next generation.”

She added, “The goal is that, through studying in school and youth groups, we can teach the heritage of Ethiopian Jews, and build a courageous identity together with a sense of belonging within Israeli society.”