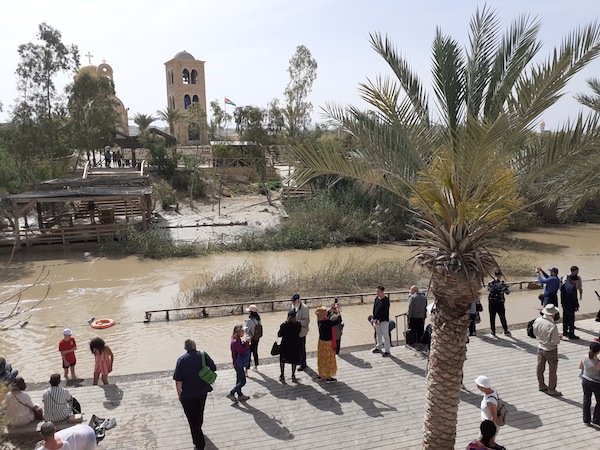 An April 15 press tour took journalists to the Israeli side of the Jordan River. Joshua and the Israelites made their crossing here. (photo by Gil Zohar)

Seventeen bulletproof buses of pilgrims, plus one carrying journalists, spilled their contents April 15 at Qasr al-Yahud (Arabic for the Jews’ Castle) on the muddy banks of the not-so-mighty Jordan River, 10 kilometres east of Jericho. The buses were provided by the Government Press Office in Jerusalem.

The holy site is also called the Land of Monasteries because of the seven Catholic, Greek Orthodox and Ethiopian churches there. Until 2011, it was a fenced-off, closed military zone ringed by minefields. Qasr al-Yahud is revered by Christians as the place where John the Baptist immersed his second cousin, Jesus of Nazareth.

For Jews, the shrine marks where, on Nissan 10, circa 1290 BCE, Joshua bin Nun led the Children of Israel to ford the Jordan River and begin their conquest of the Promised Land. But, with the cold peace prevailing between Israel and Jordan, soldiers of the Hashemite Kingdom’s Arab Legion warily monitored the crowds, making sure that no brave souls crossed to the polluted stream’s east bank to reenact Joshua’s miraculous crossing on dry land.

As Joshua and the 12 tribes approached the river, they were met by the kohanim (priests) carrying the Ark of the Covenant. The Jordan then miraculously split for them – perhaps caused by a landslide in the earthquake-prone region that temporarily blocked the river’s flow – allowing them to cross. After fording the Jordan, Joshua erected 12 stones taken from the river at Gilgal, whose location today is disputed by historians and archeologists.

Symbolizing that the process of the Israelites conquering the Promised Land some 3,289 years ago is still underway, Palestinian teenagers in Jericho pelted the armoured bus in which the journalists were riding, smashing one of the shatterproof windows. No one was injured in the attack.

For this writer, the explosive sound of the thump of the rock on glass brought to mind Joshua’s advice when the Israelites marched on ancient Jericho to begin their conquest: “Be strong and of good courage.” (Joshua 1:9)

Qasr al-Yahud is a corruption of “the Jews’ break,” traditionally the place where the Israelites crossed over, that is, “broke” the Jordan River after their 40 years of wandering in the Sinai Desert: “When the soles of the feet of the priests who bear the ark of the Lord, the Lord of all the earth, shall rest in the waters of the Jordan, that the waters of the Jordan shall be cut off, even the waters that come down from above, and they shall stand in one heap.” (Joshua 3:13)

It was here, too, that Elijah the Prophet ascended to heaven in a fiery chariot after he and Elisha crossed the Jordan: “And Elijah took his mantle, and wrapped it together, and smote the waters; and they were divided hither and thither, so that they two went over on dry ground.” (2 Kings 2:8)

The strategic and diplomatic significance of the Jordan Valley were spoken about by retired Israel Defence Force (IDF) deputy chief-of-staff major general Uzi Dayan, who was elected to Israel’s Knesset (parliament) in the country’s April 9 general election.

Rabbi Yisrael Meir Lau, the chief rabbi of Tel Aviv, and previously Ashkenazi chief rabbi of Israel, spoke of the Land of Israel’s long centuries of foreign occupation, from the Romans to the British.

From 1948 until 1967, Qasr al-Yahud was under Jordanian control, and was a popular destination for tourists and pilgrims. In 1968, following the Six Day War, access to the site was prohibited by the IDF because of its location beyond the border fence in a closed military zone. In recent years, the Israeli Civil Administration – with the assistance of the tourism and regional development ministries – carried out infrastructure and development work at the site, including the clearing of mines. In 2011, the site was opened to visitors on a permanent basis without the need for prior security coordination.

Entering ancient Jericho, with its 8,000-year-old remains at Tel as-Sultan and two Byzantine-era synagogues, is another matter. Large signs at the entrance to the city proclaim in Hebrew and English that entry is prohibited to Israelis. In honour of the Nissan 10 celebration, however, Israelis were allowed to enter the city in Area A, the Palestinian self-rule section of the West Bank, which is off limits the rest of year.

And what of the minefields? One million square metres of land are currently being cleared of approximately 3,000 anti-personnel mines, antitank mines and other unexploded ordinance. The project is being carried out by Israel’s National Mine Action Authority under the direction of the Defence Ministry, together with HALO Trust, an international mine-clearance charity.

[For more on this press trip to the Jordan River and Jericho, see “Traveling into our past.”]