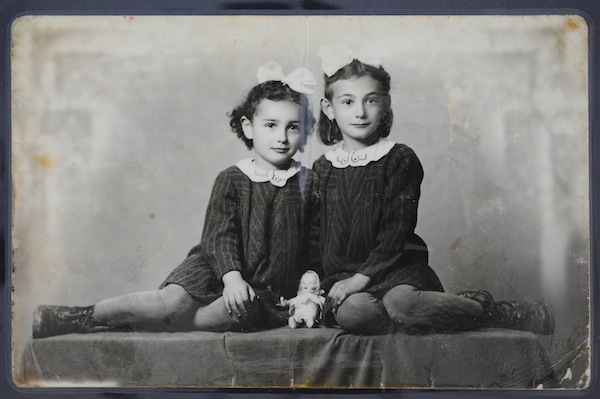 Susan-Zsuzsa and Lili Klein (photo from Yad Vashem via Ashernet)

On April 13, 1944, sisters Susan-Zsuzsa and Lili Klein (in photo) wrote their father Hugo a short letter: “Dear Daddy, We are well – goodbye.” Hugo had been drafted into a forced labour battalion in 1943; his wife Matild had stayed with their two daughters in their hometown of Hencida in the Bihar district of Hungary. Hugo survived the war, but Matild, Susan-Zsuzsa, 9, and Lili, 7, were deported to Auschwitz on May 24, 1944, and murdered shortly after their arrival.

Exactly 75 years later, Susan-Zsuzsa and Lili’s letter is among a dozen last letters included in Yad Vashem’s latest online exhibition, Last Letters from the Holocaust: 1944, presented to mark Israel’s Holocaust Martyrs’ and Heroes’ Remembrance Day. Many of the documents included in the exhibition (yadvashem.org/yv/en/exhibitions/last-letters/1944/index.asp), as well as the photographs, were donated to Yad Vashem as part of its national Gathering the Fragments campaign. Together with the tens of thousands of Holocaust-era artifacts and artworks in Yad Vashem’s collections, these historical testimonies are due to be conserved and stored in the new Shoah Heritage Collections Centre, part of a new campus being built on the Mount of Remembrance in Jerusalem.