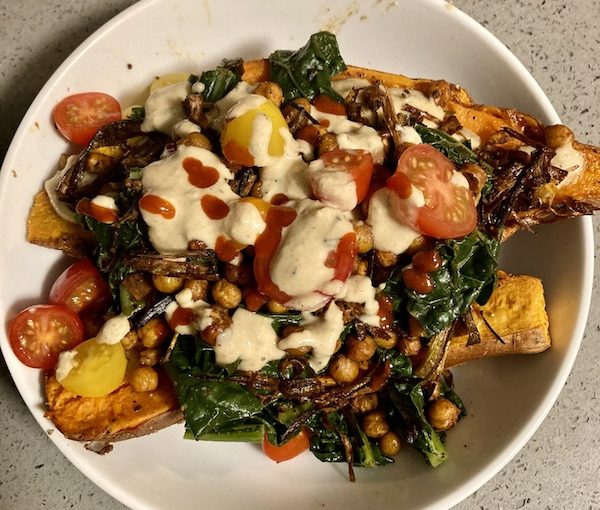 In a word: yum. I tried out four recipes in The Tahini Table: Go Beyond Hummus with 100 Recipes for Every Meal by Amy Zitelman with Andrew Schloss. All were delicious. All worth making. I will definitely bring more tahini into my life, but not every day, as the meals are somewhat complicated to make; at least they were for me.

Published by Surrey Books, an imprint of Agate Publishing, the cookbook is gorgeous. The colour photos by Jillian Guyette and the overall look and layout make The Tahini Table as much eye-candy as cooking guide. The first chapter is all about tahini – what it is, how to use and store it, with a foray into hummus and halvah and ingredients one should have close at hand, such as avocados, various oils, garlic and onion, yogurt, different vinegars, date syrup, etc. There is a relatively helpful instruction on how to mince garlic and a section on herbs and spices. Each recipe is labeled with the diets with which it is aligned; vegan or gluten-free or Paleo, for example.

There are six chapters, covering sauces, dips, breakfasts, lunch-type food and sides, main courses and, finally, desserts. While Zitelman promises easy and quick recipes – and perhaps they are if you do as recommended and stock up on the sauces, dressings and dips – I was starting from scratch. The two mains – the benedict and the sweet potatoes – each took almost two hours to make. Only once I started did I see, for example, that one of the benny recipe ingredients was pickled red onion, carrot or radish … go to page 127. So, off to make that before I could proceed. Oh, and don’t be fooled, as I was, by the directions for the pickles – for the benedict, you only need to make pickled onions, so adjust accordingly, unless you’re also wanting to have the carrots and radishes for other purposes. (In the end, I was happy to have made all three, but I was quite hangry while making them.)

Zitelman, who is a co-founder with her sisters of Soom Foods, writes in the introduction, “we founded Soom Foods with a vision that tahini would be a staple pantry item in the American market simply because it is a delicious, nutritious and versatile ingredient. Although this ambition was somewhat far-fetched at the time, tahini is increasingly recognized as a superfood that is rich in omega-6 fatty acids, protein and calcium.” More reason, if I needed it, to experiment further with the recipes in The Tahini Table. Here are the ones I’ve kitchen-tested so far, sans Zitelman’s informative and delightful preambles or suggestions, because of space limitations.

To make the sauce: Fill a blender with very hot tap water to warm up the container. Wait five minutes, then drain. Add the egg yolks, lemon juice, tahini, garlic, salt and two tablespoons boiling water. Blend on medium speed until just combined, about 30 seconds. If the sauce is too thick, add the remaining one tablespoon of boiling water and blend to combine. Set aside.

Coat the tomato rounds with two teaspoons of the oil and set on a broiler pan. Season with salt and pepper and sprinkle on the cumin. Broil until the surface is speckled but the tomato is still firm, about three minutes.

Meanwhile, fill a 10- to 12-inch skillet with water and bring to a boil over medium heat. Add the vinegar.

Crack each egg into a separate cup or ramekin. Gently slip each egg from its cup into the water. Turn the heat to medium-low so that the water in the pan barely simmers.

Poach the eggs until the whites are set and the yolks remain creamy, about two minutes.

To assemble: Put an English muffin on each plate. Top each half with a broiled tomato. Use a slotted spatula to remove each egg from the water, wait a few seconds to let any extra water drain back into the pan, then place it on the tomato. Top each with sauce and a little pile of pickled red onion. Serve immediately.

Put each of the cut veggies in their own pint container.

In a small saucepan, combine the vinegar, water, honey, salt and crushed red pepper and bring to a boil over medium-high heat. Pour a third of the pickling mixture over each of the veggies. Let cool for about 30 minutes before serving.

Store in closed containers in the refrigerator for up to two weeks.

Rub the cut surfaces of the sweet potatoes with the remaining one tablespoon of olive oil and season with salt and pepper. Put the sweet potatoes, cut-side down, in the centre of the sheet pan. Bake until the potatoes are fork-tender, about 45 minutes.

While the potatoes are baking, boil the kale in a good amount of salted water until tender, about 10 minutes.

When the potatoes are tender, put two halves on each plate and flatten them with the back of a large fork. Transfer the kale to the sheet pan and toss with the chickpeas and leeks. Drizzle some of the tahini sauce over the potatoes and pile the veggies on top. Top with more tahini sauce and the tomatoes, parsley and hot sauce.

Heat the olive oil in a small skillet over medium heat just until warm, less than a minute. Stir in the rosemary, remove from the heat and give it 10 minutes or so to cool down and get flavourful.

Meanwhile, combine the garlic, orange juice and lemon juice in a medium bowl. Let it sit for one to two minutes. Whisk the orange zest, tahini and cumin into the garlic mixture until just combined. Don’t worry if it gets thick and grainy. Whisk in the water, a quarter cup at a time, until the sauce is smooth and creamy. It should be the consistency of a creamy salad dressing, like ranch.

Stir the cooled rosemary oil into the tahini.

Store in a closed container in the refrigerator for up to three days.

Mix the tahini and sugar in a large bowl until well combined. Beat in the eggs, vanilla and almond extract until the mixture is smooth.

Mix the flour, baking powder, salt and cardamom in a medium bowl, then stir the flour mixture into the batter just until there are no visible dry spots. The dough will be very stiff. Wrap it in plastic and refrigerate for at least one hour or as long as 24 hours.

Set two oven racks near the centre of the oven. Turn the oven to 350ºF. Line two sheet pans with parchment paper or silicone baking mats.

Put the sesame seeds in wide bowl. Scoop the dough with a one-tablespoon measure and arrange as mounds on a big sheet of aluminum foil, plastic wrap or parchment. Wet your hands and roll the mounds into egg-shaped ovals. As each one is made, coat all over with sesame seeds and place on the prepared pans, about one inch apart. You will probably get 13 to 14 cookies per pan.

Bake until golden brown, about 10 minutes. Cool the cookies for two minutes on the pans, then transfer them to wire racks to cool completely. When the pans are at room temperature again, form the remaining batter into cookies and bake in the same way.

Store in a closed container at room temperature for up to two weeks.