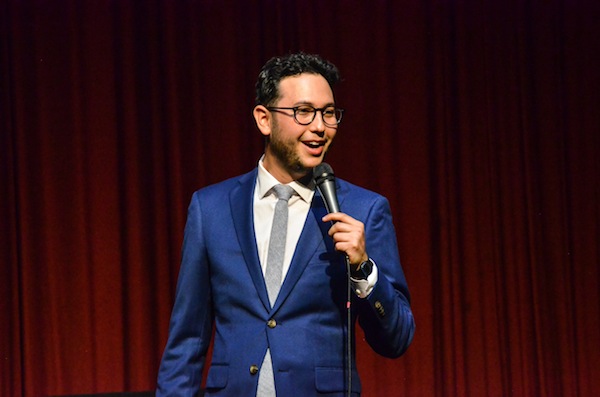 “I can’t get enough Jews in my life,” he told the Independent. “I’m married to a Catholic woman but I’m a Jew through and through. Any time I can talk about Jews and Jewishness, and my unique views on that, I jump at the opportunity because comedy is the jazz of our people. That’s how I express my Jewishness in the biggest way, not by keeping kosher or going to Israel each year, but through comedy.”

Breslin opened his first Yuk Yuk’s location in 1976. Today, he has 15 Yuk Yuk’s franchises across the country, has published four books, produced programs for television and radio, and appeared in theatrical productions. He’s a sought-after public speaker and, in December 2017, he was awarded the Order of Canada.

“Comedy is not usually something people respect, so it’s gratifying that some bureaucrats in Ottawa see what I’ve done with my life and think it has value,” he said. “But all the people I’d like to lord this over are dead now.”

Those people include a high school principal who informed Breslin he was a menace to society, as well as his aunts and uncles, who refused to attend his shows “because they thought I was wasting my life.”

Back when he started Yuk Yuk’s, Breslin said he received no support or encouragement from the people closest to him. “My mother was a child actress in the Yiddish stage in 1920, so you’d think she would be thrilled about what I was trying to build in comedy, but instead she was appalled by it right to the grave. My father was more ambivalent. He respected Yuk Yuk’s as a business and was proud of me, though he didn’t find the comedy funny. Even my friends thought I was nuts.”

When he began the first Yuk Yuk’s location, in Toronto, Breslin said his main goal was to avoid law school. “I thought I’d do comedy for a couple of years and find something else to do when it ran out of steam,” he admitted. “I never thought it would become my life!”

Initially, the Toronto Yuk Yuk’s was known as “that Jewish club,” because the names of the performing comedians were all Jewish. “When standup started, it was a very Jewish thing to do,” explained Breslin. “A lot of the comedians at that time were my friends from high school or university, and they gravitated to Yuk Yuk’s because they knew me.”

Today, standup is a mainstream phenomenon and Yuk Yuk’s is no longer known as a Jewish club. One thing that’s remained unchanged from the get-go, however, is Breslin’s insistence that his clubs be uncensored. “I’ve never censored an act in the 42 years I’ve been in business,” he said. “Being uncensored is important because the clubs are small enough that no one can control them. We have an obligation to be the official opposition and, these days, it’s more important than ever.” While he conceded that most comics exercise their right of free speech to talk about sex, not politics, he said, “Still, the opportunity is there.”

Yuk Yuk’s has two locations in British Columbia: Abbotsford and Vancouver. The Vancouver club opened in 1988 and is located on Cambie Street, near City Hall. It’s always been a success, said Breslin. “I measure success by some level of profitability, but also by how impactful our product is on the wider community and on comedy in general,” he said.

Among the comedians who got their start at Yuk Yuk’s are Russell Peters, Jim Carrey, Howie Mandel, Mike Bullard and Gerry Dee.

Breslin said that, on May 6, at the Temple Sholom event, he plans to talk about how each Jew has their own unique form of Jewishness and how we treat our culture as a Chinese buffet, picking what we want from it.

“I’m going to talk about the golden age of Judaism, 1950 to 1975, when it was cool and sexy to be a Jew,” he said. “I’ll try to figure out what happened between then and now, and why we’re a people in need of a good PR person. I’ll also reveal a lot of fun stuff about my life, my family and things I’ve done, relating that to comedy in general and what it means as a Jewish art form.”

For event details, visit templesholom.ca/inspired. The evening at Performance Works on Granville Island is titled Inspired to Act and includes comedy, music by Adrienne Robles and Liel Amdour, and the 2018 Tikkun Olam Youth Awards.