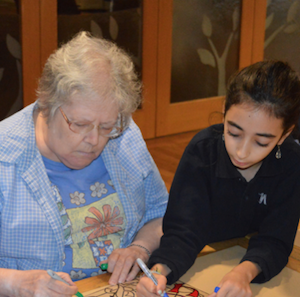 Just before Sukkot, the Grade 6 and 7 girls of Vancouver Hebrew Academy were warmly welcomed to Louis Brier Home and Hospital, where they visited with the residents and worked on a special project. Together, the students and residents created stained glass-style decorations for the Louis Brier’s sukkah.

It is a mitzvah to beautify the sukkah and, in this art project, several mitzvot overlapped, including connecting the younger generation with those who laid the groundwork for our community – for which we are grateful – and helping both the residents and children celebrate the holiday of Sukkot with an extra level of beauty and simcha.

Dr. Neil Pollock hands out some of the awards, as Larry Barzelai and student participants look on. (photo by Cynthia Ramsay)

Based on the numbers alone, the 27th Annual Public Speaking Contest on March 19 at the Jewish Community Centre of Greater Vancouver was a success. Participants: 120. Prizes: 30. Volunteer judges and moderators: 30.

Founded by Larry Barzelai in memory of his father, the event was co-sponsored by Jewish Federation of Greater Vancouver and State of Israel Bonds, with additional support from the J and the Isaac Waldman Jewish Public Library. As one of the volunteer judges, I witnessed a well-organized event that thrived on controlled chaos – almost all of those 120 student participants were accompanied by family and/or friends, and in the crowd were potential future speakers and their parents sussing out what participating next year might be like.

“My father, Morris Black, alav ha’shalom, would be very pleased to see the legacy he created,” Barzelai told the Independent.

Indeed, he would. Speakers were from grades 4 through 7, and they had their choice of topic from a list of 10, one of which was to choose their own. The most popular choices in the Grade 4 class I co-judged were to create a day to mark an event from Jewish history that is not currently being celebrated or commemorated; to describe an app that would enhance Jewish studies at your school; to explain why recycling is a Jewish concept; and to explain what you think is/are the best innovation(s) to have come out of Israel in recent years.

The enthusiasm of the competitions taking place in rooms around the J was corralled in the Wosk Auditorium afterward, and Alex Konvyes entertained the excited students and their guests while the results were being tallied. As each winner was announced, huge cheers went up. As some winners read their speeches, the auditorium came to a hush.

“Several parents in attendance this year had previously been public speaking contestants in their youth, so the legacy continues,” Barzelai noted.

While pleased that “the contest continues to be healthy” and that it is strongly supported by the principals and teachers of the three day schools – Vancouver Talmud Torah, Vancouver Hebrew Academy and Richmond Jewish Day School – Barzelai expressed concern about “the inability to attract students from Jewish supplementary schools and students that are not affiliated with Jewish schools. In former years, the contest had a wider cross section of students,” he said.

Barzelai credited Lissa Weinberger, JFGV manager of Jewish education and identity initiatives, for doing “all the work, with only occasional input from me. Her organizational skills are great. A few prospective judges dropped out close to the event, and she was able to recruit new ones at Shabbat services. Beware, synagogue attendees!”

In order of first, second and third, this year’s Public Speaking Contest winners in each contest were:

What do you get when you put 90 people in an auditorium filled with delicious snacks, drinks, piles of boxes and mounds of packing materials? The Greater Vancouver Jewish Day School Purim Project Packathon, of course! GVJDSPPP, for short. 😉

Assembling the more than 1,300 mishloach manot packages is a huge undertaking, requiring planning, strategy and oversight. Not to mention an army of volunteers! As in past years, the packathon took place in the KDHS auditorium, and this year’s volunteers included VHA’s Grade 6 and 7 students, VTT’s Grade 6 students and more than 15 community volunteers. The pre-packing and labeling were done by students from VHA and PTI the day prior.

Purim is a time to promote unity and togetherness, and the packathon is an amazing opportunity to do just that. When students help and give back to a community that supports and gives to their school, the good will created goes full circle. “What a great way to start off Simchah Week at VHA!” said one of the VHA teachers.