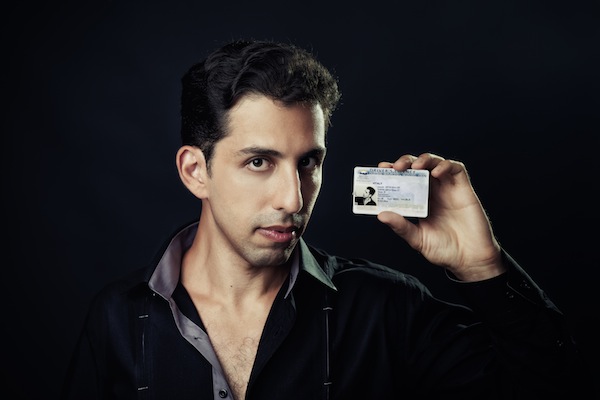 Illusionist Vitaly Beckman can seemingly change a driver’s licence photo. To witness the feat in person, check out his June 5 show at the River Rock Casino. (photo by Galina Sumaneeva)

“I rarely have a chance to perform in my own town, so it’s a privilege and I am really looking forward to it,” illusionist Vitaly Beckman told the Jewish Independent about his June 5 show, Vitaly: An Evening of Wonders, at the River Rock Casino, which is a fundraiser for Richmond’s Beth Tikvah Synagogue.

Beckman is constantly performing on the road. “My favourite trip was to Puerto Montt, in Chile – I got to perform in a beautiful theatre situated right over a lake and witness some breathtaking views,” he said. “Other recent highlights include doing an off-Broadway run last summer. I was performing eight shows a week for 16 weeks straight. It was surreal to see my own face appear on the Times Square buildings, and was a dream come true.”

Every show is unique, he said. And, in every show, “there are things that do not go according to plan, and I have to adjust and improvise. Especially when I invite audience members up on stage, you never know what to expect. It’s part of the fun and makes it more interesting and memorable.”

This is one of the reasons Beth Tikvah asked Beckman to perform.

“The synagogue wanted to try something unique and different from the usual,” board member Allan Seltzer told the Independent. “We wanted to be able to invite congregants, Jewish community members and the general public of all ages to an exciting ‘evening of wonders.’”

Noting both performers’ “great stage presence and showmanship,” Seltzer said, “Vitaly emigrated from the former Soviet Union as a boy and has been wowing audiences with his world-class show for over 15 years. Vitaly has appeared on television around the world and recently fooled Penn and Teller on their WB televised show.”

Beckman told the Independent he is always coming up with new illusions, but that he needs to section off parts of the year to actually work on them. “I find that I need no distractions in order to create new material, as the creative process requires an absolute focus and to think of nothing else,” he said. “Oftentimes, I take the summers off to do that, and sometimes find small breaks in between shows.”

As for Kaplan, Seltzer said he “has been performing and entertaining audiences across B.C. for over 25 years. His unique brand of illusions and comedy make him the ideal opening act for Vitaly.

“Both artists are Jewish and are proud to be assisting Beth Tikvah for this special evening,” he said.

Also participating in the evening’s entertainment will be emcee and fellow community member Howard Blank, who, said Seltzer, “is known throughout B.C. for his vast philanthropic work on stage at over 50 galas and events annually … [and] has been bestowed with the Sovereign’s Medal for Volunteers by the governor general in Ottawa. Howard celebrates his Jewish Vancouver roots by donating his time to numerous Jewish events, including the JCC Sports Dinner, Chabad, Talmud Torah and our Evening of Wonders.”

Funds raised from the River Rock show will be put toward Beth Tikvah programs and services, which include a preschool, religious school, social and educational youth programs, adult education, Jewish holiday programming, conversion classes, Israel programming, interfaith panels and lifecycle events, said Seltzer. He added about the youth activities that “many of our participants are Jewish children and youth who are in public schools, and their only exposure to Judaism and the Jewish community is through our youth and religious school program.”

VIP ticketholders will get a chance to meet Beckman after the show and sponsors will be recognized in the evening’s program, said Seltzer.

As for what the audience can expect, Beckman said, “They will witness art coming to life – photos will come to life, drawings come out of a page and even their face will disappear on their own driver’s licences. If they like, the photo on their ID will be replaced by another face, whoever’s they choose. It has never been done before by anyone else. There is also a new piece, dedicated to Salvador Dali, whose work also inspired some of the visuals in the show.”

For tickets to Vitaly: An Evening of Wonders, visit ticketmaster.ca or call Beth Tikvah at 604-271-6262.