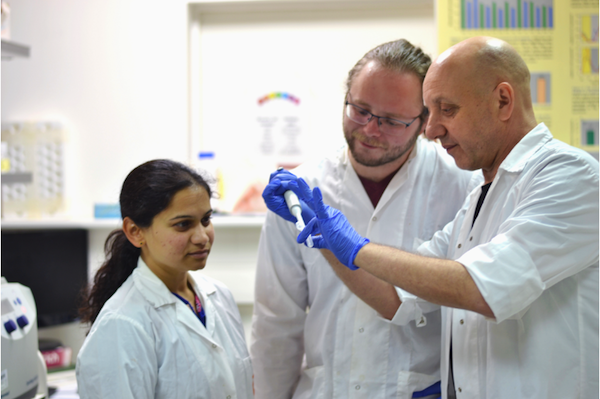 Prof. Simon Barak of the Jacob Blaustein Institutes for Desert Research at Ben-Gurion University of the Negev, right, is coordinating all the plant biologists and imaging specialists. (photo from CABGU)

Can plants grow in a barren landscape such as the surface of the moon? If so, what types of plants? Could enough plants grow to support a future moon colony? These are the types of questions the Lunaria One consortium has set out to answer.

An experiment proposed by Lunaria One, known as Aleph, was selected by SpaceIL, a nonprofit aerospace organization, to be included as one of the payloads on board their Beresheet2 lander. The Beresheet2 mission, scheduled to launch in mid-2025, will consist of two landers, landing on each side of the moon, and an orbiter that will continue to orbit the moon for up to five years. Aleph will consist of a tray of seeds and dehydrated plants, a device that will water them, heaters and cameras to monitor the plants.

Prof. Simon Barak of the Jacob Blaustein Institutes for Desert Research (BIDR) at Ben-Gurion University of the Negev is coordinating all the plant biologists and imaging specialists. They include three Australians, one South African and two of his colleagues from BIDR at Ben-Gurion University: Prof. Aaron Fait and Dr. Tarin Paz-Kagan.

“The chosen experiment has enormous value both for our life here on earth and for humanity’s progress in space exploration,” said Shimon Sarid, SpaceIL chief executive officer. “Examining plant growth under extreme conditions will help us as far as food security is concerned. Plant growth in extreme conditions will help humanity in the long run. We are happy to cooperate with Lunaria One and are very excited.”

“The motivation for this mission comes from humanity’s passion to explore and see life thrive in barren landscapes,” explained Barak. “We see the Aleph payload as an important step towards our eventual goal of providing plants for food, medicine, oxygen production, CO₂-scrubbing and general well-being for future astronauts inhabiting the moon and beyond.”

“The central value guiding this project is that space exploration is for everyone; we don’t want a future where only autonomous and remote-controlled machines inhabit realms beyond earth, but where humans can live and thrive,” said Lunaria One director Lauren Fell. “The key to this is to get humans involved and to give them a say in how we get there. The Aleph project aims to open up the science and engineering behind growing life on the moon so that anyone can be involved.”

Growing plants on the moon means overcoming several challenges, such as massive temperature swings on the way to the moon, a water supply for the plants, and high temperatures when growing the plants. The plant types will need to be those that can germinate and grow to an appropriate size for imaging within 72 hours of deployment.

The research team expects their plant selections to be relevant for vertical farming and resource-challenged landscapes here on earth.

The project also has a strong citizen science component. Parallel science experiments will be carried out by amateurs (for example, high school students) and professionals to compare growth to that on the moon.

“The earth is finite,” said Barak. “Its resources are finite. So humanity’s future depends upon reaching the stars.”

– Courtesy Canadian Associates of Ben-Gurion University of the Negev

On Nov. 19, SpaceIL announced that Canadian billionaire and businessman Sylvan Adams, who brought the Giro d’Italia Big Start cycling race to Israel this year, joined the project to land the first Israeli spacecraft on the moon and contributed $5 million to the organization.

Adams announced his contribution as part of a special tour that took place at the Israel Aerospace Industries (IAI) MBT Space facility in Yehud, where the spacecraft is being assembled. Also attending the tour were SpaceIL’s president Morris Kahn, SpaceIL chief executive officer Dr. Ido Anteby and other senior IAI officials, including IAI vice-president of space operations Inbal Krayes.

Adams, who was celebrating his 60th birthday, said at the event that “this contribution to strengthening the Israeli space program, and encouraging education for excellence and innovation among the younger generation in Israel, is the best gift I could have asked for.”

He added: “I believe that sending the first Israeli spacecraft to the moon will inspire Israeli schoolchildren to take up STEM studies and think about space exploration, and especially to believe that everything is possible.”

Since SpaceIL’s establishment in 2011, the mission of landing an Israeli spacecraft on the moon has become a national project embodying educational values. Adams joins a group of donors who have contributed to the project, including Dr. Miriam and Sheldon Adelson, Sammy Sagol, Lynn Schusterman, Steven Grand and others.

Kahn, a businessman and philanthropist, took it upon himself to lead the project and bring it to its completion, donating $27 million and serving as the project’s president. He regards its completion as his personal mission.

“We are in the final stretch,” said Kahn, “and I believe that his [Adams] joining will help us raise the remaining money to complete our ambitious mission.”

“The teams of SpaceIL and IAI are making great progress in a series of tests and trials being carried out at IAI’s space facility,” Anteby said. “At the same time, we are stepping up activities to promote scientific and technological education in the state of Israel, ahead of launch.”

In October, SpaceIL and the Israeli Space Agency announced a collaboration with NASA that would enable SpaceIL to improve its ability to track and communicate with the spacecraft before, during and after landing on the moon.

IAI, which is the home of Israel’s space activity, has been a full partner in this project from its inception. Over the years, additional partners from Israel’s private sector, the Israeli government and from academia have joined as well. The most prominent among these are the Weizmann Institute of Science; Israel Space Agency; the Ministry of Science, Technology and Space; the Israeli telecom firm Bezeq, and others.

The same week of Adams’ donation, Ofir Akunis, Israel’s minister of science, technology and space, visited the IAI facility where the spacecraft is being built, after the ministry announced an additional NIS 7.5 million ($2.66 million Cdn) in support for the project.

“The moon mission is one of great national pride. There is a short time before the spacecraft’s launch, and I have no doubt all Israelis will feel great joy when the spacecraft blasts off,” Akunis said. “I am a great believer that the landing will be one of the highlights in the history of the state of Israel, and the educational activity we are doing around the mission sets the foundation for engineers who will work in the field of space and science in the next decade.”

SpaceIL was the only Israeli contestant in the international Google Lunar XPRIZE competition. To win the first prize of $20 million, the participants were required to land an unmanned spacecraft on the moon. The competition ended officially with no winner on March 31, when Google announced that it would no longer sponsor the competition.

After succeeding in raising the critical funds to continue its activity, SpaceIL announced that it was determined to continue on its mission and to launch its spacecraft, regardless of the competition. Concurrently, the nonprofit is continuing its efforts to raise the funds necessary to complete this mission.

SpaceIL aims to set in motion an “Apollo effect” in Israel: to encourage the next generation of Israeli children to choose to study science, technology, engineering and mathematics (STEM) and to change their perception of these subjects; to generate a sense of capability, and to allow them to dream big dreams even in a small country.