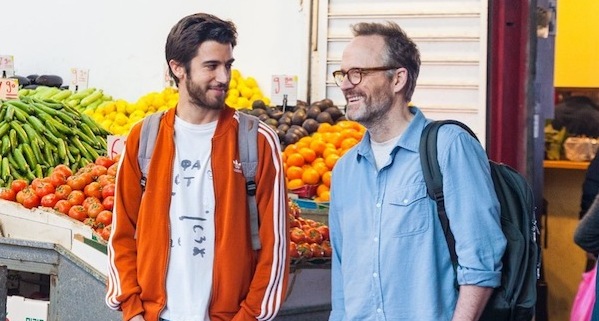 Niv Nissim, left, and John Benjamin Hickey co-star in Sublet, one of the Vancouver Jewish Film Festival’s many offerings this year. (photo from facebook.com/subletfilm)

The Vancouver Jewish Film Festival will take place exclusively online March 4-14. And, while you might think that COVID’s continued presence would necessitate a trimmed-down festival lineup, there are as many high-quality and diverse films being offered this year as in previous years. We give JI readers a small teaser of what’s to come, with more reviews in our next issue.

In the film Sublet, a New York Times travel writer whose shtick is to get a feel for a city in just five days arrives in Tel Aviv. Michael (John Benjamin Hickey) has booked the apartment of film student Tomer (Niv Nissim) but, realizing the student has nowhere to go, the pair end up as temporary roommates.

The somewhat uptight middle-aged Ashkenazi American, standing out like a sore thumb in his semi-casual blazer, is contrasted with the hot-tempered, in-your-face young Sabra. The differences between the two men – and, by extension, between two generations of Jews, of gay (or, in Tomer’s case, possibly bisexual) men, of Israelis and Diaspora Jews – form the heart of the leisurely paced film. Just as Tomer ridicules Michael’s touristy ideas of Tel Aviv’s highlights, the cinematography captures the city at some of its grittiest best.

Is it a generational divide or a cultural one that has Tomer and Michael adopting wildly different sensibilities toward the tragedies of recent Jewish history and the experiences of gay men in the AIDS crisis, which Michael’s first book explored?

“It’s so depressing,” Tomer says of the AIDS pandemic. “Why does everything always have to go back to that?”

A more stark response – and one that is darkly humorous but startlingly confusing to Michael and perhaps many viewers – comes when one of Tomer’s friends is discussing fleeing Tel Aviv for a more successful artistic life in Berlin.

“It’s a bit odd that you’re moving to Germany, the place that symbolizes Jewish tragedy,” Michael observes. The Israeli pair pauses for a moment, then burst into hysterical laughter.

The theme of patrimony runs through the drama. Michael and his partner are struggling to find a surrogate for a baby they want to parent. Tomer, it turns out, is himself the product of a mother who chose the path of artificial insemination. Michael is wondering if he is getting too old to start afresh as a father. Tomer, in his clumsy way, may be struggling with the absence of his own paternal influences.

The bonds and divisions between generations, between conceptions of the past, between Israel and exile are explored but unresolved in this pleasant (if sometimes PG) film. The brief glimpse of Tomer’s hilariously awful horror film is just a bonus.

A shiva from hell

When her parents browbeat her into attending a shiva, Danielle does not expect to run into Maya. The two young women have an entwined past, so much so that other attendees can’t remember which one is which. The film Shiva Baby quickly turns into a subtly riotous adventure in the joys and drawbacks of tight-knit communities and the challenges of keeping secrets in a yenta-intensive environment.

Though their shared history is a source of immense awkwardness and brilliantly snarky sparring, for Danielle (Rachel Sennott), this shiva is a house of horrors. Having told so many lies to cover her failure to launch successfully into adulthood, every turn, every new face at the shiva, is an opportunity for sequential interrogations and fresh humiliation. It becomes an unintentional parlour game to piece together the variety of stories Danielle has told of changing majors, areas of specialization and plans for the future. Family, friends and acquaintances compare conflicting tales Danielle has woven over the years, creating an elaborate narrative of mostly imagined endeavours.

Her parents Debbie (Polly Draper) and Joel (Fred Melamed) seem both oblivious dupes and co-conspirators in Danielle’s web of deceptions. The loving but exasperatingly overbearing parents add to their daughter’s discomfort time and again, leading to an understated climax that literally shoves Danielle’s bad choices in her own face.

This “comedy of discomfort” is a masterpiece of interfering adults and world-weary youth. The unifying bond between generations is a shared art for the backhanded compliment and straight-up insults. After Danielle spills coffee all over herself and a friend’s baby, her mother offers solace: “Well, thank God Sheila’s coffee is always lukewarm.”

Shiva Baby, a Canadian-American co-production, features a musical score that amusingly invokes the horror genre to emphasize the nightmare scenario in which Danielle finds herself, almost exclusively of her own design. Any awkwardness on the part of the viewer is alleviated by schadenfreude that whatever she has coming is probably well overdue.

For tickets to the festival, visit vjff.org.