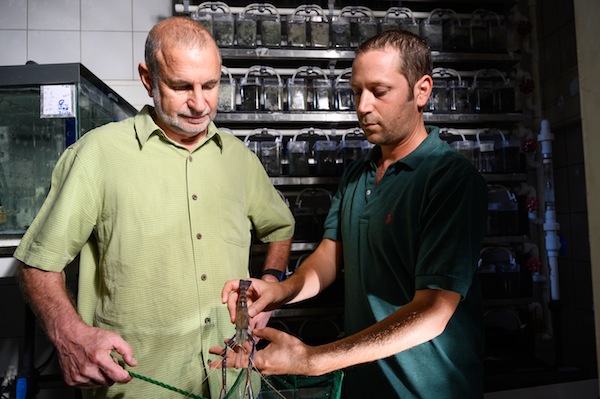 Ben-Gurion University’s Prof. Amir Sagi, left, and Dr. Amit Savaia have found a way to use shrimp to fight a deadly parasitic disease in Nigeria. (photo from BGU)

This year, Ben-Gurion University of the Negev plans to launch a new school that will specialize in climate change research, mitigation and environmental sustainability. It will also offer a graduate program with a cross-section of specialties.

BGU’s three campuses house an enrolment of 20,000 students and a faculty of 4,000. Its areas of expertise range far and wide, and, among other things, the university has become known as a go-to place for figuring out how to address one of the 21st century’s biggest threats: climate change.

For BGU president Daniel Chamovitz, the university’s growing reputation isn’t that much of a surprise. “Because what have we been doing in the last 60 years?” he asked rhetorically. “We have been learning how to survive – not to survive, how to thrive in the desert.”

Chamovitz’s own expertise is in genetics and plant biology. Originally from Aliquippa, Pa., he is most recently known for his studies in plant development and for his book What a Plant Knows: A Field Guide to the Senses, which has been published in 18 languages.

The realization that the university already has a strong foothold in environmental and sustainability research, Chamovitz said, is what led to its new mandate to become the world’s authority on climate change and sustainability.

For Prime Minister David Ben-Gurion, the Negev was always Israel’s greatest untapped resource. It was the place, he predicted, that the Jewish homeland would sow their greatest accomplishments. A desert that spans more than 60% of the country’s land mass, the Negev would hold the answers to Israel’s most pressing problems of the day: how to grow enough food to feed a nation, generate sufficient energy to power cities and harness enough water to turn brown deserts green.

But building a sustainable nation, he warned, one that could benefit from a desert that receives less than 200 millimetres of rainfall per year wouldn’t be simple. “It is incumbent upon Israel’s scientists to reveal the secrets of nature that are unique to our land,” he said. The Negev, he insisted, was the perfect environment for an institute of study that could solve the world’s most basic – and challenging – problems of existence.

Ben-Gurion’s visionary thinking was the catalyst for many of Israel’s earliest environmental accomplishments, including desalination and energy generation using seawater, steps that would be critical to Israel’s much-needed water technology. Both projects were developed in the 1960s, at a research facility in the town of Be’er Sheva, a Bedouin settlement at the northern tip of the Negev. The institute that gave rise to these early innovations would eventually become BGU.

Two years ago, when he was hired as president of BGU, Chamovitz told the Jewish Independent he had conducted a “bottom-up” assessment of all of the departments and their areas of specialization. He wanted to know what their strengths and weaknesses were.

“[We] identified over 150 researchers dealing with various issues of sustainability and climate change,” Chamovitz said. “And, in every discipline. Not only in our institutes of water, energy and desert agriculture – that’s the low-lying fruit – but also in engineering and in civil engineering, where we develop energy-efficient building material and methods.

“It was clear to everyone that the field of sustainability and climate change was what sets Ben-Gurion University apart from every other university in Israel.”

That brand-name recognition helped secure a new partnership with Royal Bank of Canada, which is sponsoring the new school’s first graduate fellowship program. The investment by RBC will fund two fellowship positions for students specializing in climate change or sustainability-related research and, in doing so, help launch the program.

This isn’t the first time that RBC has partnered with the university. In 2018, RBC and BGU entered into a cybersecurity partnership, in which the bank invested $2 million toward research programs in BGU’s department of software and information systems engineering.

In this case, the partnership aligns with RBC’s own long-term sustainability goals and its Tech for Nature program, which it launched in 2019.

“The research being conducted also aligns with RBC’s interests as we recognize that innovative technologies offer immense potential to help solve environmental challenges,” Martin Thibodeau, B.C. regional president, RBC Royal Bank, told the Independent. “The most pressing environmental concerns of our time are negatively impacting the planet at a rate that often outpaces the solutions designed to address them. RBC is leveraging its capabilities in technologies such as artificial intelligence and blockchain, as well as its convening power, to build solutions and the type of multi-partner coalitions needed to address and solve our shared environmental challenges.

“Our commitments align with the United Nations Sustainable Development Goals and, through our partnerships, we aim to develop multi-sector, multi-partner solutions to achieve progress on these challenging issues. We’re both proud and excited to partner with BGU through CABGU to address these important issues,” Thibodeau said.

“We are in awe of the grassroots contributions that RBC makes to our Jewish community and the positive role that RBC plays and has played in strengthening so many local community organizations in British Columbia and across Canada,” said David Berson, executive director of the B.C. & Alberta chapter of the Canadian Associates of Ben-Gurion University, which worked as a liaison with RBC and BGU to secure the partnership.

“[We] are incredibly excited that corporations such as RBC see the importance of partnering with Ben-Gurion University, [and] that their investment [will] pay back to society tenfold,” Chamovitz said. He likened RBC’s partnership to an educator who invests in students’ goals, which, in time, benefit generations to come.

Climate change is a multidisciplinary problem, said Chamovitz, one that takes the expertise of not only hydrologists, biologists and engineers, but geneticists, geologists, legal experts and others. Education, therefore, must be tailored to meet the broad range of knowledge required to understand climate change. That doesn’t mean graduate students won’t specialize in their research and their studies, Chamovitz said, but they will be expected to have a multidisciplinary background that connects with the challenges of creating a sustainable world and addressing climate change.

“The one requirement would be their willingness to work interdisciplinarily and to take courses in other fields. Otherwise, they don’t need the school,” said Chamovitz. “They could just go into the school of engineering [for example] or school of ecology. And, you know, for some people, that’s the better track.”

Chamovitz said it’s companies like RBC that are making this new branch of education possible, adding that the university has seen an increase in inquiries from companies and communities across the world that are attempting to address climate change challenges. Last year, for example, a company located in Chennai, India, reached out to see if BGU could assist in building a local agricultural research institute. Chamovitz said the institute’s future researchers will be trained first at BGU before returning home to Chennai to begin their new jobs. The university has also struck up a three-way partnership with the city of Dubai, in the United Arab Emirates, and Arizona State University, in Tempe, Ariz., to address issues relating to global warming in Dubai.

“We have similar collaborations in western China, which are also in arid places. And we are really excited about developing relationships in Canada,” said Chamovitz, who recently visited Vancouver to meet the presidents of Simon Fraser University and the University of British Columbia, which both offer studies in climate change and sustainability.

The two Israeli RBC fellowship students have already been selected. Shir Eisenstein will be doing a master’s in material engineering, looking for new materials that help harness sustainable, renewable energy. Nadina Levitt, who is also pursuing a master’s, will be enrolled in the department of geography and environmental studies and studying sustainability models for smart cities. Both students demonstrated a key requirement for upper-level studies when it comes to BGU’s approach to this new specialization: innovation.

“One of the problems in higher education is this need for prerequisites,” Chamovitz noted. “What we are looking for is not prerequisites, but ingenuity.”

The university is expected to complete the formalization process and approval for the new school of sustainability and climate change in February and be open for enrolment this October.

For more information about BGU and the programs it offers, visit in.bgu.ac.il/en. For more about CABGU, contact Berson at [email protected] or 604-266-2680, or visit bengurion.ca.