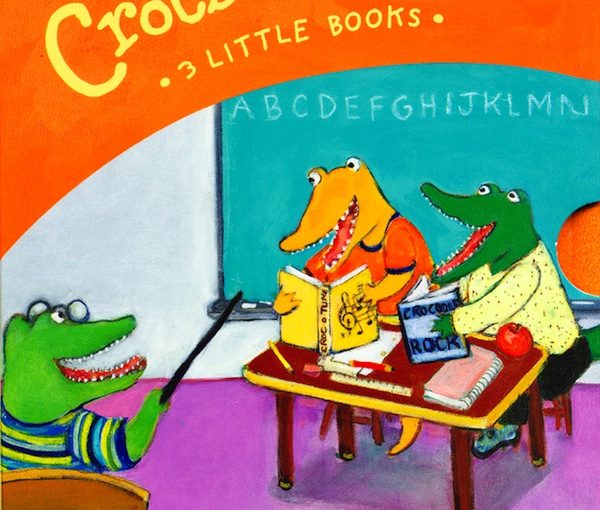 So much of what we do in life we do almost automatically. For better or worse, we anticipate what’s coming next and, often, we’re right. But a trio of children’s books just published by Tradewind Books will amuse young readers and refresh the perspectives of their adults. Crocs in a Box, written by Robert Heidbreder and illustrated by Jewish community member Rae Maté, contains three expectation-smashing little hardcovers: Crocodiles Say …, Crocodiles Play! and Crocs at Work!

In Crocodiles Say …, it’s the bright, cheerful and iconic crocodiles of Maté that are at odds with Heidbreder’s words. In one scene, for example, we see three restrained crocs, the epitome of manners, “never rude.” The crocs “chew and swallow, their mouths closed tight. Crocodiles say … [page turn] Always be polite!” Well, it has to be said that the crocs are doing anything but eating politely.

In Crocodiles Play!, the crocs get all dressed up for one type of sport, such as baseball, but then play … basketball?! And, in Crocs at Work!, we are treated to a healthy dose of silliness, as the crocs engage in doctoring, cooking, painting and other work, all with a small twist, lots of joy and no little mess.

This collection would make a great Chanukah gift, expected or not!

Rae Maté is one of the many artists who have donated work to the fundraiser for a Hornby Island gallery. (photo from Rae Maté)

Hornby Island, in Georgia Straight, is known for its natural beauty. It is no surprise that many of its small population – 1,016, according to the 2016 census – are artists. While the community hasn’t had a regular exhibition space, this is about to change. On Oct. 10, the Hornby Island Arts Council is holding an auction fundraiser in support of building a new art centre.

“A full 40% of residents of Hornby are visual artists, dancers, musicians, poets, actors and writers,” Cheryl Milner, auction chair, told the Independent about the need for a permanent gallery. “For too many years, local visual artists have been using a 1967 mobile home with a small display area to show their work. Otherwise, artists have built their own studios or hung their work in the local co-op general store to get in front of the island visitors.”

About the concept for the fundraiser, Milner said, “The idea came to me because I became familiar with this amazing woman on the East Coast of Canada, Zita Cobb. She lived on Fogo Island, left after high school, made it in the high-tech business and went back home to see how she could help her native island, particularly because the cod fishery had closed. She started a foundation to create greater cultural resilience for the region.”

Milner doesn’t want anyone to compare her to Cobb, but she wants to help Hornby Island and its artists on a smaller scale. “My thought was to marry Vancouver to Hornby Island as Toronto supports Fogo Island. The auction is our first attempt, and we’ll see how it goes,” she said. “The parallel goes only as far as helping support the gallery. We don’t wish to expand things further than that for now.”

She said a gallery has been on the radar of the arts council for years. “We have some new blood in the organization and want to help make it happen,” she explained. “We are also applying for some matching grant opportunities, which means that we could potentially double the capital we have been scrimping to save. Currently, we have about $180,000 saved. This will give us a good foundation to move forward. We do have a couple of architects on board to support this venture, so there appears to be quite a lot of momentum to get this done.”

Attracting tourists is one of the reasons the auction will take place in Vancouver, not on the island itself.

“Many Vancouverites frequently visit Hornby,” Milner said. “They love the place and their special time there. We are giving Vancouver an opportunity to support the artists they love by helping to build a proper facility to house a permanent gallery, exhibition and workshop space for future generations.”

The artists of Hornby Island are excited about the gallery and the auction.

“Approximately 35 artists donated their works,” said Milner. “About 25 are in the live auction and another 10 in the silent auction, which will focus on items and services of interest to Vancouverites.”

Besides their art, some participants are offering “Hands-on Hornby” artistic experiences to bidders. Among these will be cutting a song with Marc Atkinson at the Barn Studio and a two-day workshop with ceramicist Rachelle Chinnery, which includes a rental stay.

One of the visual artists who donated their work for the auction is Vancouver Jewish community member and well-known local artist Rae Maté. In 2011, she had a solo show at the Zack Gallery, and the Independent published an interview with her at the time. Since then, much has happened in her artistic life.

“In 2015, my third book in the Crocodile series with the author Robert Heidbreder, Crocs at Work, was published by Tradewind Books. My silly crocodiles are back and, this time, they have jobs and professions, which they do in very surprising and funny ways,” she said.

Since the death of her mother in 2017, Maté has devoted herself to art full-time.

“I’m excited to be using oils again as well as acrylics,” she said. “I’m exploring new directions: abstraction, non-figurative works and landscape. This summer, I had a very successful show on Hornby during the art festival in August. I was one of the four artists invited to mentor Hornby children. The children’s art was shown alongside with the mentoring artist’s new works. It was an exciting and rewarding experience for us all.”

Maté’s ties to Hornby Island are longstanding. “Our family fell in love with Hornby Island in the 1980s, when my sons were little, and we spent several summer holidays camping there,” she said. “After my daughter was born, we purchased a small cabin. Five years later, we sold it and bought a larger place with indoor plumbing. We are still there today and we have many Jewish friends who live nearby. For years, we have been having potluck Shabbat dinners at Grassy Point, a wonderful park with a meadow and a beach a short walk from us. It is famous for its sunsets.”

Maté has enjoyed the island and its artistic atmosphere for years. It feeds her creativity.

“I used to tell people that being an artist on Hornby Island is like being a Jew in New York,” she said. “Almost everyone is creative and involved or interested in the arts. I feel very inspired and at home there.”

She also contributes to the arts scene on Hornby. “I regularly sell my art cards at the co-op store and at the farmers markets in the summer. I had a few solo and group shows at the community hall.”

Not only do she and her family spend most summers on the island, but she usually manages to get there for about a week every two months. “I do so much of my painting and illustrating work there, on my deck in the garden, when the weather allows, or in the studio during the colder months,” she said.

When Maté heard about the auction, she knew she wanted to donate her works for it.

“When Cheryl approached me at the market, I said yes immediately. This is a cause I whole-heartedly support. I am offering three paintings for the auction, all new, created especially for this event.”

The Oct. 10 auction will take place at Sage Bistro, which is behind the Chan Centre for the Performing Arts at the University of British Columbia. To learn more, visit hornbyislandartscouncil.wordpress.com.