A recently released study from the graduate School of Education at Stanford University engaged 7,800 middle school, high school and college students to evaluate the information they received on the internet. The report said there was a “stunning and dismaying consistency” in the responses from the students, demonstrating an inability to discern information based on whether it originated from activist groups, neutral sources or advertising, and students routinely could not tell the difference between news articles from legitimate sources and unreliable webpages, nor between ostensibly balanced news coverage and opinion pieces.

The aftermath of the recent U.S. presidential election has seen commentators raise alarms over “fake news” – stories planted on social media with the deliberate intent to mislead. Obviously, this is another wrinkle in the whole issue of discerning fact from fiction. Then there is the ability of wholly unchecked assertions to go viral and be taken as fact by hundreds of thousands of people.

The New York Times analyzed one example of how these things can happen. In Austin, Tex., a man with just 40 Twitter followers saw a lineup of buses in downtown Austin on Nov. 9, the day after the election. That evening, crowds gathered in Austin, protesting the election of Donald Trump the night before. The man put two and two together and tweeted that “Anti-Trump protesters in Austin today are not as organic as they seem. Here are the buses they came in. #Fakeprotests #Trump2016 #Austin.”

The due diligence the man performed was a Google search to determine whether there were any major conferences being held in Austin and he found none. It turns out the buses were hired by a software company that was holding a conference for more than 13,000 people. Nevertheless, the tweet, which implies that the anti-Trump protesters were bused into town by some nefarious organizer, was shared 16,000 times on Twitter and 350,000 times on Facebook.

This was an example of a “story” not being adequately researched and proven. It is a slightly different species from the deliberately false “news” stories that popped up during the election with headlines like “Pope Francis shocks world, endorses Donald Trump for president” and “FBI agent suspected in Hillary email leaks found dead in apartment in murder-suicide.” Both of these, and countless more like them, were intentionally false, yet shared by thousands of people who believed – or wished – them to be true.

Comedian Jon Stewart used to refer to his program The Daily Show as “fake news,” but in fact it was parody and satire, taking a grain of truth and riffing humor and social commentary from it. This differs as well from sites like The Onion or Canada’s The Beaverton, which are not intended to be taken seriously, but sometimes are.

Then there is, to bring it full circle, the forms of legitimate journalism – news and analysis – which are generally well-researched, with facts corroborated and sources verified, but are often received by consumers as something else. In other words, people will take falsified news as fact and decry factual reporting as made-up.

On Sunday, Trump himself tweeted, without a shred of evidence, “I won the popular vote if you deduct the millions of people who voted illegally.” With vote counting (inexplicably) still underway, Trump has easily won the electoral college and, therefore, the presidency, but Hillary Clinton is currently 2.2 million votes ahead of Trump in the popular vote.

This sort of assertion from a sore winner is typical of the man, who seems to lie even when there is no advantage, as if to keep in practice. Throughout the campaign,

Trump routinely told untruths, which helps explain why the Oxford dictionary chose “post-truth” as its international word of the year for 2016.

Tens of millions voted for Trump despite, or possibly because of, his awkward relationship with the truth, suggesting that truth doesn’t matter like we once assumed it did. Or that people don’t care what the truth is, so long as what is said, published or posted conforms to or supports their preexisting opinions. People are willing to hear (or read, say or write) falsehoods and accept them as true if they wish them to be, rather than question their own beliefs or situation at all.

The unwillingness or inability to differentiate truth from fiction has long been a concern. Purveyors of lies – in advertising, politics, daily life – have been doing their deeds for centuries. Yet the ability in the internet age for people to select “news” that supports their worldview, or to be duped by people with agendas, has opened whole new universes of falsehood. Scarier, by far, is the apparent insouciance with which many people approach the issue. Some of us are satisfied with fiction if it suits our preferred version of fact. In such a case, we are not facing a problem of media literacy. We are facing a more serious affront to the very idea of reality.

Many of our readers survived the predations of fascism or communism; some endured both. It is probably safe to say these people do not take democracy for granted, as some of us who have been fortunate to live our entire lives under democratic governments may.

For many of us, Remembrance Day is one of the few times in the year when we stop and take stock of our good fortune and the sacrifices that made it possible. This year, we should perhaps give even more consideration to the fact, which we have mentioned in this space before, that democracy is a remarkably new and fragile thing. What we recognize as modern democracy is an American invention just 240 years old.

There have been concerning noises in the birthplace of democracy leading up to the close Tuesday of this ugliest of presidential election campaigns. In addition to Donald Trump’s threats to not abide by the democratic decision of the people because of some imaginary “rigging,” much of his rhetoric has seemed deliberately calculated to undermine democracy and its parallel values of pluralism and respect for diversity. Trump’s behavior and language – and the vitriol and violence he inspired and encouraged among his followers – are antithetical to American democracy.

We should not fall into the trap of comparative blame. This was probably the nastiest campaign in American history, but that is not something we can ascribe equally to both leading candidates and their followers.

Hillary Clinton ran a negative campaign, yes, but only within the comparatively gentle parameters of what has become conventional in American politics of the television age. Trump’s campaign, on the other hand, was a blast furnace of hatred, ridicule, dehumanization, lies, racism, sexism and incitement.

One of the most important pillars of democracy is also one of the most ephemeral: the confidence of the populace in the institutions of governance. And polls indicate that Americans currently have extraordinarily low opinions of their officials.

The American people – and the new president (who was declared after the Independent went to press) – have an unenviable task ahead of them in restoring confidence in the system, in their institutions and in their ability to advance as the world’s beacon of democracy.

For the sake of their country – and for the sake of the magnitude of impact it will have on the rest of the world – we should all wish for a period of reflection, healing and reconciliation.

Israel’s President Reuven Rivlin spoke strong words at the opening of the Knesset’s winter session this week. The very survival of democracy, he suggested, is on the line.

“Against a background of political upheavals occurring in the West, the free world, it is no secret that democracy – or Western liberal democracy – is in a state of confusion,” said Rivlin. “Many citizens across the world feel that the existing democratic system is struggling to function and, moreover, is struggling to offer an answer to their needs in light of the current threat of terrorism, the current wave of migration and refugees, or the ongoing economic and employment crises.”

Rivlin was speaking broadly, apparently referencing the various movements springing up in recent years at the fringes of what was once the political mainstream. These include new nativist and often xenophobic movements in Europe. The vote by Britain to leave the European Union is a symptom of a strain of political ideology that rejects open borders – both for trade and for people. While the Brexit vote was supported by people across the political spectrum, its campaign was led by the United Kingdom Independence Party, a movement pushing its way into the mainstream from the far right.

While Europe struggles with the challenges of and reactions to economic meltdowns and waves of refugees and migrants, the presidential election in the United States has been rocked by events that also threaten foundational understandings of democracy.

Donald Trump, the Republican candidate for president, has suggested he may not abide by the results of the election, an outcome he is alleging to be “rigged.” There is no evidence, according to almost all commentators, of any rigging of the electoral system. Indeed, say most, the patchwork nature of the American electoral system makes comprehensive manipulation of a federal election essentially impossible. However, Trump’s assertions seem based less on the idea that the electoral infrastructure is rigged than on his perception that the media and the political establishment are nearly uniformly against him. As paranoid as this may seem, it is not altogether false. The political establishment, even in his own Republican party, is lukewarm at best toward their outsider nominee. And the media is merely reporting the attitudes of some of the public, many of whom are aghast and appalled at the successive emanations from Trump’s mouth.

However, if the establishment and commentators in the media are lined up against him, this should arguably be viewed as a statement about him, not them – which brings us back to the issue of Trump’s threatened refusal to admit defeat. Absolutely crucial to democracy is the legitimacy – and perception of legitimacy – of the electoral process. In the most contested election in modern history, in 2000, Al Gore accepted defeat even though he received more votes in the state of Florida than the declared victor George W. Bush and, therefore, should have been the winner. In the interest of national unity and the preservation of confidence in the system, Gore acceded to the determination of a Florida court.

Now, Trump suggests he may not accept the results even if he is conclusively defeated. Of course, anything is possible with this candidate, so it may be bluster. But the bigger picture in this scenario is the impact Trump’s words have on his followers. Some are already promising “revolution” if Trump is defeated.

Then, of course, there is the other possibility: Trump wins.

Where American democracy – and the country’s role as a model of responsible government – would go from there is an ominous mystery. 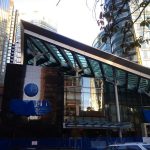