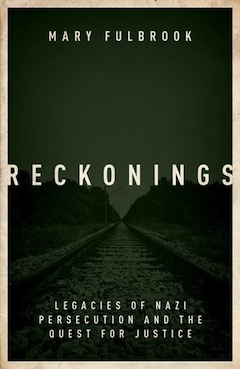 Who could shoot at close range two million children, women and men who were standing at the sides of graves they had just been forced to dig? And then, when this process proved inefficient, who could herd four million more into cement bunkers and drop cyanide pellets on top of them? Were they monsters?

“Monsters do exist,” Primo Levi once said, “but they are too few in number to be truly dangerous. More dangerous are the common men, the functionaries ready to believe and act without asking questions.”

Christopher Browning, in his famous 1992 study of Holocaust perpetrators, Ordinary Men, came to the same appalling conclusion: the killers were simple, middle-class working men, “believing Christians” from all walks of life (including thousands of priests and seminarians), just witlessly and anxiously “following orders” and blindly obeying peer pressure, not, in most cases, virulent antisemites. 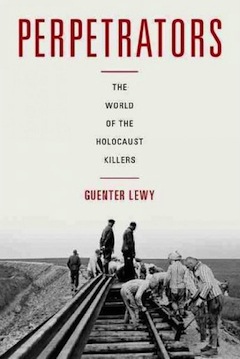 The controversial nonagenarian scholar Guenther Lewy, the author of Perpetrators: The World of the Holocaust Killers (Oxford University Press, 2017), and son of a camp survivor, begins his new study of Holocaust perpetrators with the same question: “How could such terrible deeds happen in the heart of Christian Europe and among a nation known for its poets and thinkers? What had converted so many seemingly ordinary people into killers, willing participants in what is the worst crime in modern history?”

Lewy’s study is the first English-language volume to make use of the 49-volume collection of 929 German trial records of Holocaust perpetrators recently published by the University of Amsterdam (it is not made clear why the records were not published in Germany). He also draws upon an enormous accretion of “previously untapped” sources such as the 50,000 letters and diaries of Wehrmacht soldiers recently released by German archives, as well as victim recollections and, most importantly, hundreds of trial records of Nazi functionaries, beginning in Nuremberg in 1945 and continuing to the present day. Of the 1,200 citations in the 25-page bibliography and the 600 footnotes, by far most of them are from the late 1990s to the present.

Lewy’s conclusion is similar to Levi’s and Browning’s: the perpetrators were not characteristically sadists or psychopaths, or even necessarily antisemites, but simply obtuse followers of orders, vassals to peer pressure, or simply “ordinary people” trying to advance their careers.

Lewy’s graphic details and conclusions will be familiar to readers of Saul Friedlander’s monumental Nazi Germany and the Jews, 1939-1945: The Years of Extermination (2007), but Lewy’s access to the most recent documentation brings some new and important facts to light.

First, the whole notion of a “clean Wehrmacht” can now be dismissed. Lewy proves conclusively that there was close contact between the Wehrmacht and the SS and particularly the 38 “Totenkopf” (“Death’s Head”) divisions of the Waffen-SS: new evidence shows that Jews were “squarely in the crosshairs of the Wehrmacht” and that the number of members of the Wehrmacht who took part in the murder of Jews “is in the tens of thousands.”

Second, Lewy’s close study of the new material available allowed him to conclude that “not a single person who asked to be relieved [from duty in the killing squads] was tried by a military court” and, in fact, “most of their requests were granted.” Lewy found 85 cases of Wehrmacht soldiers who refused to shoot civilians: all were simply transferred to other duties. The significance of this finding, of course, is that it puts the lie to the excuse frequently made by the killers that they “had no choice” and “had to follow orders.” (Lewy points out, significantly, that Yad Vashem has in fact recognized 45 Wehrmacht soldiers as “saviours of Jews.”)

In the sixth chapter of Perpetrators, “Flawed Justice,” Lewy makes his most significant mark. Here, Lewy reveals that, of the 200,000 or so former Nazi killers who, through 2005, were investigated by German authorities, fewer than 10% had charges brought against them; and, of these, only half were convicted. Light sentences were the norm; and only eight of the 2,000 former members of the Einsatzgruppen investigated received life sentences. Most of these examples of “flawed justice,” Lewy concludes, had to do with the fact that so many judges were “tainted” as former party members, and that German law (unlike Canadian law) distinguished between perpetrators and accomplices, usually finding the latter innocent, as they were “only following orders,” that they were only “tools” or were not “unseemingly zealous” in their murderous actions. (Two years ago, German courts finally adopted Canadian/American style “common design,” sharing the guilt between perpetrators and accomplices.)

In his final chapter, “Explaining the Holocaust,” Lewy concludes that nobody, ultimately, can simply give up his freedom. Situation, genetics, conditioning are all significant, but “they do not dictate or determine character.” In fact, recalling how anxiously in 1945 the Nazis strove to cover up what they had done led Lewy to conclude that “even Hitler and the members of his immediate entourage probably knew deep down that they were doing wrong.”

And, as Lewy concludes, in his last sentence, “The fact that so few avoided evil orders remains an ineradicable blot on an entire German generation and a cross that their descendants continue to bear.”

Perpetrators is a valuable addition to a long story, one which may never be conclusively told.