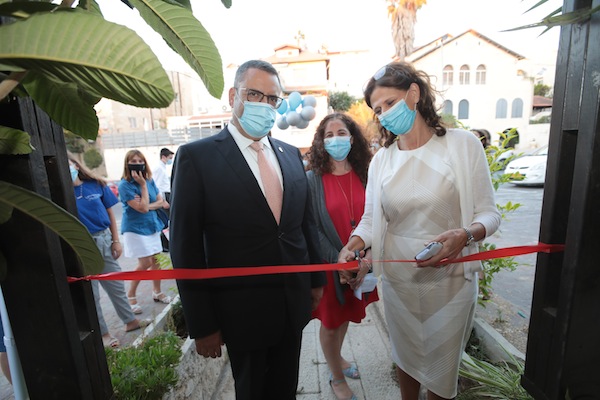 MK Michal Cotler-Wunsh, right, with Michal Berman, chief executive officer of the Lone Soldier Centre in Memory of Michael Levin, and Jerusalem Mayor Moshe Leon at the inauguration ceremony in August of a new home for female lone soldiers in Jerusalem. (photo by Yossi Zamir)

Michal Cotler-Wunsh was an 18-year-old new immigrant from Canada when she enlisted for the Israel Defence Forces some 30 years ago. Unlike most of her fellow recruits, she had no home to go to on weekends.

“I was a ‘lone soldier,’ without close family in Israel. There was no real framework that supported us – but much has changed since then, as this matter has become more acute,” she said.

Now a Knesset member (as a representative of the Blue and White coalition faction led by Benny Gantz), Cotler-Wunsh has taken up the welfare of the more than 6,300 lone soldiers lacking family in the country: immigrants, volunteers, orphans and youths estranged from their families.

“In retrospect, serving in the army was the most amazing exposure to Israeli society in many ways,” said Cotler-Wunsh, whose father Irwin Cotler was Canada’s minister of justice and attorney general from 2003 to 2006. “I did a squad leaders course and served in a very ragged anti-tank base at Nitsanim. The company slept in tents and went on marches in the dunes.”

The army gave her rent support and, on weekends, she stayed in a room in a Jerusalem apartment. “I lived with an elderly man who usually went away on weekends, so I was alone in the apartment,” she said. “To this day, I have connections with people from the Machane Yehuda market, especially the owner of the marzipan shop and the Tzidkiyahu delicatessen. These two would prepare boxes of food for lone soldiers at the end of Friday business, and we would get to Jerusalem after everything was already closed, go through the market and take the boxes of food prepared for Shabbat. To this day, I don’t forget them and they don’t forget me.”

Beyond material needs, she recalled the psychological hardship of being far from home.

“I know how important it is for lone soldiers to have their parents accompany them,” said Cotler-Wunsh, who served in the days before digital communication. “One aspect that has changed is parents’ involvement in day-to-day matters. Nowadays, it’s possible to convey to the lone soldiers’ parents a reality that they do not understand – and there’s no chance that they will understand – but they’re very concerned about. This communication calms both them and the lone soldier throughout their military service.”

“Lone soldiers need somewhere to live, a hot meal on Friday night … things other soldiers take for granted,” Michal Berman, chief executive officer of the Lone Soldier Centre in memory of Michael Levin, a nonprofit organization that looks after their welfare.

The LSC, established in memory of an American immigrant soldier killed in the 2006 Second Lebanon War, currently operates nine apartment homes, offering low-rent housing to about 100 soldiers in Jerusalem, Petach Tikva, Herzliya and Ramat Hasharon, as well as social clubs catering to about 1,000 soldiers in Tel Aviv, Jerusalem and Be’er Sheva. Only financial restraints are preventing the opening of more facilities and programs.

Beyond the social-psychological aspects, soldiers’ needs are often prosaic. “They need basic things like clean underwear, a toaster, somebody to look after them when they are sick,” Berman explained. “We have hundreds of volunteers who cook and do their laundry for them – many of them former lone soldiers or others immigrants.”

The organization’s staff also provide advice on how to navigate Israel’s bureaucracy, and attend military ceremonies, taking the place of their parents who cannot be there. “They say this means the world to them,” Berman said.

“The difficulties continue beyond their army service,” noted Cotler-Wunsh, who returned to Canada after studying law at the Hebrew University of Jerusalem. “After 13 years in Israel and with a small baby, for the first time in my life I missed my family. I was pregnant with my second child and also wanted to do a second degree, at McGill University, and took the opportunity to be close to my parents.”

She returned to Israel 10 years later with four children and pursued a legal career that led her to the Knesset, where she has taken up a host of social issues, including the welfare of lone soldiers before, during and after their service.

“Nowadays, when they do have a support system, the loneliness hasn’t disappeared – it’s just been postponed. It’s harder when you’re used to an all-embracing system then, suddenly, to find yourself really alone. In any case, getting out of the army is a shock. For a lone soldier, it’s even harder to go from a hierarchic system to being an independent citizen who has to make decisions that will affect their life. That’s part of the reason why so many young Israelis go traveling after their army service.”

Over the High Holidays, the LSC is launching a global crowdfunding campaign to help lone soldiers get through the toughest time of their lives. For more information, visit charidy.com/lsc.

Daniel Ben-Tal was a lone soldier serving as a paratrooper before becoming a journalist. Over three decades he has penned hundreds of articles in a host of journals and websites around the world. Formerly an editor at the Jerusalem Post and the English version of Haaretz, he is now an Israel-based freelance writer, editor and translator. 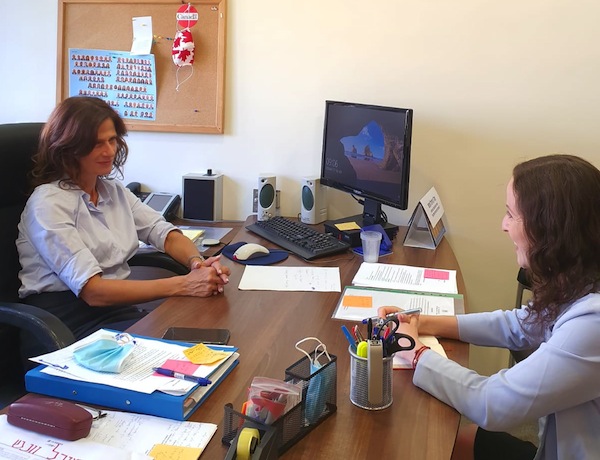 A new, dynamic force has hit the Knesset, with a political aide just as passionate, and both are rooted in Canada.

Michal Cotler-Wunsh, who once held Canadian citizenship, became a Member of the Knesset for the Blue and White Party this past June. She is among those who have endorsed a proposed bill that, if passed, would change the requirement that Knesset members who hold citizenship in another country must give up that citizenship.

Recently sworn in, Cotler-Wunsh heads a staff of four – a political aide, a parliamentary aide, a spokesperson and an aide who works with her on her portfolio as chair of the Drug and Alcohol Use Committee. In a recent interview, she told the Independent that the issues that concern her are “unity, mamlachliut (often translated statesmanship) and responsibility…. You can’t politicize or personalize issues,” she stressed. Two other issues about which she is passionate are “the ability to combat antisemitism and a commitment to olim [immigrants] and prospective olim.”

Cotler-Wunsh also emphasized her commitment to Israel as a Jewish and democratic state. As a lawyer and international law expert, she added that the international community and Israel must always uphold international law and not allow terror groups to exist in a culture of impunity. She specifically highlighted the importance of this in the context of Hamas not returning the four Israelis currently being held captive in Gaza, in a six-year standing violation of international law.

Jerusalem-born, Cotler-Wunsh spent her first seven years in Israel. When her mother, Ariela (née Ze’evi), married Canadian Irwin Cotler, the family moved to Montreal, where her three siblings were born. Most JI readers will be familiar with Cotler-Wunsh’s father, a former minister of justice of Canada, an international human rights lawyer, emeritus professor of law at McGill University, and founder and chair of the Raoul Wallenberg Centre for Human Rights, among other things.

Cotler-Wunsh returned to Israel for a one-year program after high school and stayed to serve in the Israel Defence Forces as a lone soldier. She then received her law degree from the Hebrew University and did her internship.

In 2000, she and her husband returned to Canada with their son but returned to Israel 10 years later, by which time they had three more children. In 2010, she became associated with the Interdisciplinary Centre in Herzliya and was a research fellow at the International Institute for Counter-Terrorism.

Cotler-Wunsh’s political aide is Vancouver-born and -raised Becca Wertman. The two met at a conference of nongovernmental organizations. “I read Becca, I heard her voice in what she writes,” said Cotler-Wunsh.

Wertman, who is the daughter of Charles and Carla Wertman of Vancouver, has a bachelor degree from the University of Southern California in international relations and a master’s from Columbia University in political science. She was managing editor and responsible for the Canada portfolio at the Jerusalem-based research institute NGO Monitor, authoring articles for a wide variety of publications.

“My messages are very nuanced; it was important to find somebody that can make my nuanced messages accessible to the public and be able to represent me,” explained Cotler-Wunsh. “Having read some of what Becca published, I saw that the values that drive me also drive Becca as well, particularly in the areas of human rights, international law, Zionism and democracy.”

Wertman manages Cotler-Wunsh’s schedule, handles all things that come in English, including media and social media, and reaches out to NGOs that fight antisemitism or are concerned with olim; she also assists Cotler-Wunsh in her foreign endeavours. Like her boss, she is passionate about issues concerning olim chadashim (new immigrants) and working with Diaspora communities.

Wertman made aliyah in 2016 and went to an ulpan to learn Hebrew; she is engaged to an oleh from Chicago. She sees her role as a perfect fit because of the values she shares with Cotler-Wunsh and their shared Canadian backgrounds. In addition, she admires Cotler-Wunsh’s father.

“As a Canadian who is interested in human rights, Prof. Irwin Cotler has been someone I looked up to for many years,” said Wertman.

In June, when Cotler-Wunsh received word that she would be a member of the Knesset, she reached out to Wertman and offered her the position.

“I’m 100% dedicated to MK Michal Cutler-Wunsh, to help her accomplish what she wants to accomplish,” said Wertman. “I fully believe in her goals. Her issues are those I care about. I feel so lucky to work for a member of the Knesset who is furthering issues that I so deeply believe in.” She added, “her background in human rights and international law, these are unique and important skills, experiences and values that can and will add to the Knesset.”