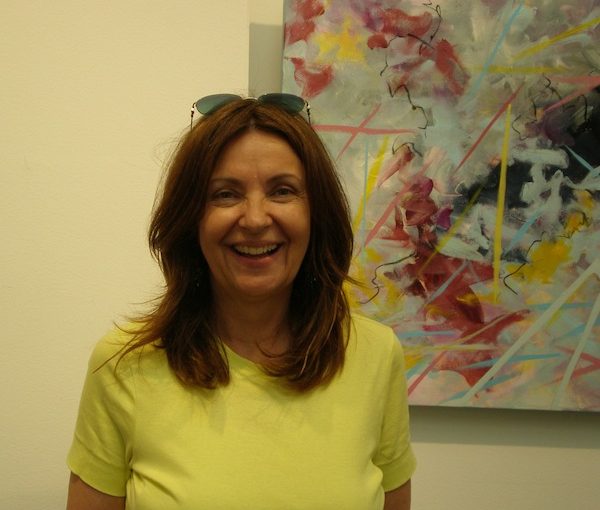 German-born Hoffecker and her family moved to Canada in 2004. “I always liked art, but when I lived in Germany, my husband and I worked in marketing for the movie industry,” she explained in an interview with the Independent.

Once, when her children were still young, they came here for a family vacation and traveled Vancouver Island. “We loved it,” she said. So much that, when they moved here permanently, they settled in Victoria. As if that wasn’t change enough, Hoffecker also decided to switch careers and follow her lifelong love of art. She enrolled in the Vancouver Island School of Art and has been studying and creating ever since.

Hoffecker’s previous show at the Zack Gallery, in 2016, was dedicated to maps. Since then, her art has undergone a couple of transformations. Conjunction is much brighter and more expressive set of works, although the abstract component remains.

On the journey to her new colourful mode, Hoffecker went through a black-and-white stage, which was the focus of her master’s in fine arts’ thesis, which she completed last year. The works she created for her master’s degree include a number of huge paintings – abstracts made with tar on canvas – plus three documentary videos. The theme – “History as Personal Memory” – was a painful one for the artist. She recalled, “One of my professors said that my works are the interconnected layers of urban setting and history. ‘Where is your personal layer?’ he asked me.”

Taking this advice, she has been trying to delve into her personal recollections, to uncover her place in history, her “personal layer” among the historical layers dominating her art. “In ‘History as Personal Memory,’ I tore pages from a history book about the Third Reich, an era in history that many Germans would prefer to forget. Yet I think it is important to face and discuss this past. Such dialogue might prevent the horrors from happening again,” she said.

In Hoffecker’s art, the artist’s memories are intertwined with the history of her nation. “Correlations between my childhood abuse, which I tried to forget, and the history of Germany, which the Germans tried to eradicate from their memories, exist in my paintings and films,” she said.

In her art and her videos, she opens up about the abuse she suffered as a child at the hands of her grandfather, who was also a Nazi. She is convinced that such openness has helped her heal, whereas suppressing the memories led only to the festering of her inner wounds.

The same is true for historical memories, Hoffecker insisted. “Germany needs to remember, to confront and challenge complacency to prevent a repetition of historical atrocities,” she said.

Her master’s thesis was a deep and painful discovery, a journey in black-and-white to underscore the grimness and tragedy of the topic. Once it was completed, she was ready for a change of direction.

“I spent the summer last year in Berlin,” she said. “When I came back home to Victoria, I wanted to paint some colours again.”

Hoffecker’s current exhibit bursts with vibrant colours and optimism. The series Berlin Spaces, like most of her paintings, has several layers. “There are outlines of many famous Berlin buildings there,” she said, tracing the architectural lines embedded in the abstract patterns with her finger. “The Jewish Museum, the Philharmonie, the library, the Reichstag. It is like a reconstruction, when I think about the past. I overlay history and architecture.”

One of the paintings, a bright yellow-and-pink abstract, has writing among its patterns. “It means ‘forgetting’ in German,” Hoffecker explained. “A few years ago, I was invited to have a solo show in Hof, a city in Germany. I worked there in the archives, found many old maps and records. One of their buildings is a factory now. After the war, it was a refugee camp, and there is a plaque to commemorate the fact. But, during the war, it was a labour camp, a place from where Jewish prisoners were transported to concentration camps and death, but nothing is there to remind [people] of that past. The painting reflects the current happy state of the building, but it also reflects the tragic past, the past we shouldn’t forget.”

While not many art lovers will see the horrors of the labour camp in the airy and cheerful palette of the painting, Hoffecker doesn’t mind. Like other abstract artists, she infuses her images with hidden messages, but doesn’t insist on her personal intentions.

“I own the making,” she said. “I bring in my memories and my heart, but I have to leave the interpretation to the viewers. One man in Victoria loves my art. He bought two of my paintings. He said he sees animal in them. I don’t paint animals, but I’m glad people’s own experience resonates with my paintings.”

Hoffecker is very serious about her art, but bemoans the need for promotion. “I did marketing for movies professionally, but I never really cared [about the reaction]. If someone didn’t like the movie we were pushing, it was his business,” she said. “But to promote my own paintings is scary. When someone doesn’t like what I do, I care. It hurts. I don’t want to do it. An artist wants to be in her studio and paint. It is all I want: to paint and to exhibit. I want people to see my work. Besides, a show is the only time when I see many of my paintings together. I never can do that in my studio. I only see one or two at a time.”

I always enjoy seeing my kids bring home assignments from Hebrew school, and last week was no exception. On a map of Israel were labeled five major cities whose names the students had to write in Hebrew. For my part, I delighted in reminding my son that we have relatives or friends in Jerusalem, Tel Aviv and Haifa, and near Be’er Sheva. There was only one problem with the map, I noticed. There was no Green Line. So, to the untrained eye, it looked like Israel’s borders span from the Mediterranean Sea to the Jordan River.

As I often do when I want to tease out a political conundrum, I took to social media. On my public Facebook page, I offered to donate $36 to charity for the first person who can show me a Green-Line-indicated map of Israel currently being used in any Jewish educational setting. Laurie MacDonald Brumberg wrote that a Washington, D.C., Jewish day school has a National Geographic map containing the Green Line hanging in the classroom. Karin Klein of Chicago showed me a Green Line map she said was used at a Schechter day school. And from Gabriel T. Erbs I learned that J Street U has launched an initiative to circulate Green Line maps to educational institutions. Apparently, URJ President Rabbi Rick Jacobs has agreed to champion this among URJ camps and Hebrew schools, according to a March 22 article published on JewSchool by David A.M. Wilensky. Gila Miriam Chait added that Yachad, a pro-Israel, pro-peace group in the United Kingdom, is following suit.

What is at stake in the mapping debate? We all know that Middle East maps are heavily invested with the symbolism of legitimacy and delegitimization. The Palestinians have long been accused of erasing Israel from their school maps of Palestine – both from the Palestinian Authority and from Hamas. An article in the current online Jewish virtual library makes precisely this point. It’s clearly ironic that we are doing the same thing we accuse our adversaries of doing.

Some might argue, however, that since the Green Line is an armistice line, not a border, that there is no need for Israel to include it. It is true that it is not a border, but neither does Israel’s international territory extend eastward from Jerusalem all the way to the Jordan River. The point is, the West Bank is under occupation – whether one sees the occupation as justified or not – and maps should reflect this geopolitical reality.

Now, beyond simply making more accurate and, therefore, educationally useful maps, what might a more politically informed Israel curriculum entail? From my kids, I have heard about the ingenious ways that Israel foiled the Egyptian invasion of 1948, including placing stones in irrigation pipes to create noise simulating artillery. My 8-year-old was impressed. I know that for Yom Ha’atzmaut, their Hebrew school served falafel, and I hoped and expected that my kids will learn some Israeli folk songs. Some folk dancing would be great, too. What I remain less certain about, however, is how much complexity about Israel’s future our kids’ schools are willing to impart. Will kids learn who the “Palestinians” are? I know that I am guilty of frequently muttering to them about “Israel and the Palestinians” without proper context. While narratives of inter-state war can be much simpler to impart, when it comes to the Palestinian civilian aspect of Israel’s founding, and the current military occupation over millions of Palestinians, it’s difficult to know where to begin.

When we learn about the past, it’s equally important to consider the future. In fact, no one knows more about the importance of historical memory in shaping today’s collective political outlook as the Jewish community. As Wilensky writes in the context of the maps, “it’s unpleasant for many to hear, but the final status of a two-state solution – if such a thing can ever be achieved – is going to rely heavily on the Green Line. Putting visual depictions of that reality before the eyes of American Jewry will go a long way toward showing them the somewhat unpleasant truths that will help build a more absolutely pleasant future.”

As for the J Street U’s map initiative, given that Jacobs has pledged to roll them out at Reform schools, I hope he will make Ottawa’s very own Reform Judaism supplementary school an early stop.

Mira Sucharov is an associate professor of political science at Carleton University. She blogs at Haaretz and the Jewish Daily Forward. This article was originally published in the Canadian Jewish News.