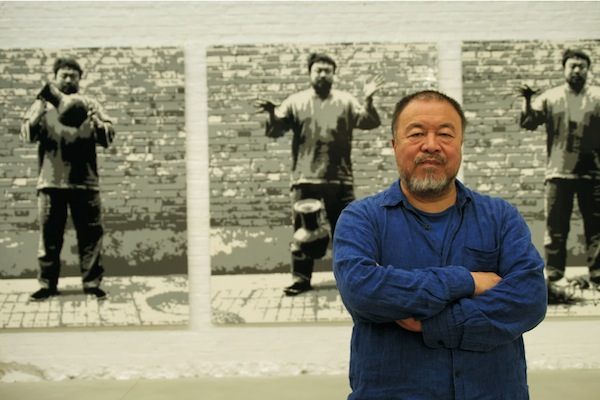 Ai Weiwei is among the artists featured in Propaganda: The Art of Selling Lies, a documentary by Larry Weinstein, which will screen twice during DOXA. (photo from DOXA)

This year’s DOXA Documentary Film Festival lineup includes Propaganda: The Art of Selling Lies, which “explores a diverse range of mediums, from well-recognized symbols of fascist movements, to more subtle forms in political satire and online slander.” Ahead of the festival, veteran filmmaker Larry Weinstein spoke with the Jewish Independent. Propaganda screens twice during the festival, on May 9 and 10.

JI: Can you share a bit about your background a few key moments on your path to being a documentary filmmaker?

LW: I’ve been directing for 35 years and have made close to 40 films in that time. But I actually started in high school and especially became interested in documentary (and propaganda) when I made a film about a slaughterhouse soon after I had become a vegetarian. It was the usual stuff – slow-mo shots of slit jugular veins and unborn calves being ripped from their slaughtered mothers all set to the music of Debussy.

After the film screened in my school, a good percentage of the students became vegetarian and I realized that, with this power to persuade, I wanted to make more documentaries. But, my first professional film 10 years later was quite different and a bit more subtle – Making Overtures: The Story of a Community Orchestra was a film which seemed like a home movie but it did very well, including an Oscar nomination. It set me on the road to a long series of music films, especially those about composers like Ravel, Schoenberg, Falla, Rodrigo, Weill, Beethoven and Mozart. It’s hard to refer to key moments. Each of the films is special to me. I’ve been very lucky.

JI: The topics you’ve covered are wide-ranging, from music and the performing arts to global politics to Dreaming of a Jewish Christmas and the documentary on Maya Farrell. How do you choose your subject matter?

LW: Originally, all my films were music based but, more recently, I’ve made three sports-based films. The latest, The Impossible Swim, is on three generations of marathon swimmers and was co-directed with my filmmaker daughter, Ali – something very special for me.

Our Man in Tehran is a documentary about the 1979 hostage crisis that corrects the inaccuracies of Argo; Inside Hana’s Suitcase is [a] Holocaust film. But, to tell you the truth, many of the music films also deal with history, with science, with politics, with culture and they are quite varied in form as well as content. Many of the films have come out my own dreams and interests. Many have been suggested by broadcasters and other sources, but those must also become internalized and feel like they come from me before I can really proceed with them.

JI: Propaganda has existed since humans appeared on earth. The DOXA blurb asks, “How do we know what we know?” But is it possible to not sell a specific perspective, if not a lie. Someone’s truth is another’s lie? What’s your diagnosis of the problem and do you have a suggested remedy? Or is propaganda a problem that can never be solved?

LW: Propaganda has indeed existed from the beginning. It was born along with the birth of art, of language, of spiritual thought. Orwell said that all art is propaganda. That’s debatable but probably accurate.

Propaganda is mind-control. It’s not necessarily sinister but I subtitled the film The Art of Selling Lies because I was in a bad mood, often reading Trump’s tweets first thing in the morning, fed up with his lies. Nothing he says is the truth; seeing that he was directly inspired by rhetoric of Stalin and by the speeches of Hitler. But propaganda is everywhere – it surrounds us and seems to be flung at us exponentially with social media – whether politically, socially, economically, religiously, too. We are fed lies and untruths from the moment we are born. Coke tastes good. You want a Barbie doll. You want a Corvette. This political party will save you; that one will destroy you. Religion is your salvation. There is an omnipotent, omniscient God who loves you but you’re [screwed] if he’s angry. All that stuff. Lies. Propaganda.

The remedy? Think about what you are being force-fed. Be rational about it. Propaganda feeds on emotion, on your fears, on your anxiety, on your superstitions. Resist and don’t accept crap just because somebody says it’s true, when it’s obviously questionable.

Propaganda screens May 9, 8:30 p.m., at SFU Goldcorp Centre for the Arts, and May 10, noon, at Vancity Theatre. The May 10 screening is part of Rated Y for Youth and includes a post-film discussion. Tickets to DOXA can only be purchased online: doxafestival.ca. For more information about the festival, which runs until May 12, call 604-646-3200.