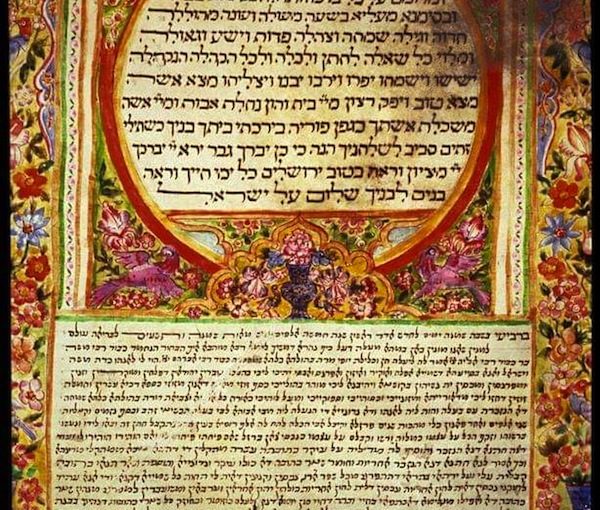 Mazal tov! So, you or someone you know is getting married. Today, Jewish weddings may be big or small, formal or informal, traditional or not. No matter the style, the ketubah, or Jewish marriage contract, is the common denominator.

The ketubah is a short, but ancient document. In his book The Ketuba: Jewish Marriage Contracts through the Ages, David Davidovitch writes: “It may be assumed that … the ketubah was first introduced at the time of the Babylonian exile.” The ketubah “testifies to the obligations undertaken by the husband towards his wife in their joint life together. The principal function of the ketuba is … to serve as a document that safeguards the position of the woman after she has entered the marital state.”

In a traditional ketubah, the groom obligates himself to pay a base amount, and perhaps additional sums that are then written into the contract. He vows to work, honour, feed and support the bride. In added phrasing, he specifically agrees to provide clothing, food (thus providing food is mentioned twice in a traditional Orthodox ketubah) and conjugal rights. The groom’s spelled-out duties are the key to the contract. The wife’s responsibilities are not spelled out, yet details of her dowry are given.

The ketubah was written in Aramaic, for many years considered the legal language of Jewish texts, records and reports, plus the lingua franca of the Middle East. Even today, many Orthodox couples continue to use the Aramaic version. As a legal document, the ketubah requires witnessing by two individuals.

That Jewish couples have used ketubot since ancient times does not mean, however, that all ketubot are the same. They have differed from place to place and from period to period. Probably the most blatant difference in ketubot is that some have been illustrated while some have not. According to Davidovitch, the Italian Jewish community produced the most beautiful documents. In illustrated ketubot, common motifs have included scenes from the Torah, cherubim, flowers, birds (sometimes exotic), fish (as signs of anticipated fertility), candelabra or menorot, gates, arches, columns and even emblems of particular countries. It is hard to say with certainty if, historically, unillustrated ketubot reflected the conservative nature of various Jewish communities or if only the rich could afford artists to decorate the contract.

Sometimes, these dissimilarities appeared within one country. For instance, between the 18th and 20th centuries, the ketubot of the Indian Jewish communities consisted of two distinct sections – the opening formula, or superscription, in the upper register and the contract itself beneath. The superscription was written in square Hebrew characters, whereas the contract itself was penned in a semi-cursive Hebrew script. The superscription began with an invocation to G-d, followed by blessings and good wishes to the newlyweds and ended with biblical verses relating to marriage and fertility. Yet, within various Indian communities, there were differences: for example, while a ketubah from Kolkata (Calcutta) was illustrated, a ketubah from Pune was not.

According to Prof. Shalom Sabar, “printed Jerusalem ketubot made their way to many countries in the east, and indirectly led to the decline of the tradition of written ketubot and hand-made illustrations. The printed ketubah (with or without decorations) slowly took the place of the hand-made ketubah throughout almost the entire Jewish world, and the ancient artistic tradition died…. During the 1970s, the decorated ketubah and motifs connected to Jerusalem [were] revived. In an era where many people were ‘searching for their roots’ and acquired a renewed interest in Jewish art in its various forms, many couples began ordering hand-decorated ketubot for their weddings.” (See the National Library of Israel, web.nli.org.il/sites/NLI/English/collections/jewish-collection/ketubbot/ketexhibit/Pages/Yemen-1925.aspx.)

Today, some couples opt to write their ketubah using egalitarian language. Their vows might reflect their responsibilities to each other, as well as responsibilities to the Jewish people and to the entire world. One example of this is the ketubah devised by Rabbi Prof. Rachel Adler. Her ketubah is called a Lovers’ Covenant. It contains biblical verses about covenant, calling marriage a covenant of distinction. Other couples focus on specific vows to be carried out in their shared life.

Other examples of changing times are ketubot for interfaith couples and for same-sex couples. Regarding same-sex couples, Lynda Fishman of Jessy Judaica Shop reports that “most couples choose a ketubah first and read through the text that is offered by the artist. Most couples prefer the same-sex text, although not all artist[s] offer a same-sex text … most do offer an egalitarian text, which can be gender-neutral.” Fishman always requests the couple “speak to their rabbi/officiant first before ordering. It’s very important for the officiant to approve the text first or to let us know if they would like any changes made.”

Masorti (Conservative) Rabbi Diana Villa and the late Rabbi Monique Susskind Goldberg worked extensively to try and prevent the problem of mesoravot get, Jewish women whose husbands have refused to grant a get, or Jewish writ of divorce; this situation occurs more in Israel than in other Jewish communities. In a detailed paper on the issue, they urged couples to sign a prenuptial agreement.

For those living in Israel, they further recommend using their Agreement for Mutual Respect. “The principle guiding financial agreement is that the husband guarantees at the time of the wedding to pay his wife a large sum of money in the future should she want a divorce and should he refuse to give her a get, even though their life together has ended. The purpose of the agreement is to have the husband give the get quickly in order to be rid of the heavy debt.”(See To Learn and to Teach [2007], the fourth booklet of a series published by the Schechter Institute of Jewish Studies).

While prenuptial agreements are less common in the Orthodox world, the Orthodox organization Chupa Pratit requires couples to sign a halachic (according to Jewish law) prenup stipulating financial sanctions if one partner refuses to consent to a divorce, to prevent incidents of “chained” women, or men. (See chuppot.org.il/en.)

The National Library of Israel has an online collection of more than 4,200 ketubot from collections all over the world. Whatever direction you decide to go in when choosing yours, good luck with your preparations. And may your shared life be as hearty and as long-lived as the ketubah itself.

Judging from its ritual text, the ketubah (marriage contract) that is read aloud during a Jewish wedding ceremony isn’t the most exciting, romantic or joyous document. It spells out a husband’s fundamental Jewish legal obligations to his wife – food, clothing, conjugal rights – and guarantees the sum that the husband will pay his wife in the event of a divorce. Yet, increasingly, today’s ketubah designs are anything but dry and transactional. Going beyond placing a plain document in a basic picture frame, or using common designs such as a view of Jerusalem or the kabbalistic Tree of Life, ketubah artists and consumers alike are developing more elaborate and personalized tastes.

Morgan Friedman, chairman and “lead muse” of thisisnotaketubah.com, calls his initiative “the first company to do outlandish ketubot,” starting in 2011. Friedman said he “wanted a ketubah with super-crazy modern art” leading up to his wedding in 2010, but couldn’t find one. He approached his wife-to-be’s friend, Argentine artist Yael Magenheim, and she designed a ketubah to match his wedding, whose theme was the colour orange. Today, Magenheim is the artistic director for thisisnotaketubah.com, which has created 3,000 ketubot to date. Most customers order designs that the website already offers, but Friedman has a separate site, bespokeketubah.com, featuring commissioned artworks.

“My official reaction and what I tell [customers] is, ‘Whatever makes you happy.’ What makes the world a wonderful place is that different people have different preferences,” Buenos Aires-based Friedman told JNS.org, reflecting on some unique ketubot he has designed, such as one commissioned for a dragon-loving couple who are Game of Thrones fans.

Adriana Saipe was also inspired to enter the ketubah art business through the process of designing her own ketubah, in 2013. For customized ketubot – which make up 20% of her business on inkwithintent.com, the rest coming from existing designs – the Vermont-based artist said she often starts “with a place that has significance” for the couple. She asks them questions like where they met, where they’re living and where they’ve traveled together. For instance, one ketubah the artist is currently working on features landscapes from Miami, Pittsburgh and Providence, three cities where the couple has lived.

Saipe also hides “little secrets” in her designs. In a ketubah for a couple that enjoys rowing, she added boathouses along a river amid a nighttime Philadelphia cityscape; the average observer might not notice the small boathouses, but they are there for the couple to appreciate, Saipe explained, describing this design choice as the difference between the “outer layer that’s art on the wall” and the “inner story for the couple.”

Although Friedman cites 2011 as the advent of the “outlandish” ketubah, other artists estimate that elaborate, unique or customized ketubot were popularized at least two decades ago.

“The current trend to have modern art ketubahs began around the end of the 1990s,” said San Antonio-based artist Nishima Kaplan, who runs artketubah.com. “I was one of the first few artists to be involved in this trend, which was customer-driven. In the 1990s, the technology didn’t allow for just-in-time ketubah prints, so people who wanted an artistic piece with a unique text had to commission a handmade piece. I made a lot of these in the early 2000s. Now, there is such a wide selection of artistic designs on the internet that can be ordered with any text, so there is less demand for handmade pieces that are artistic but not personal, the unique designs that reflect a couple’s life continue to be desired.”

Jerusalem-based artist Danny Azoulay took up ketubah design nearly 20 years ago, when Israel’s tourism minister asked him to design award certificates for companies slated to be named as the top 50 businesses for tourism in the Jewish state. At least 10 people who saw examples of the certificates in Azoulay’s store commented that they would make for compelling ketubot, prompting the artist to pursue that niche.

Azoulay, who runs ketubahazoulayart.com, recalled that, when he first began designing ketubot, most Judaica production took place in China and India, where manufacturing costs are lower than they are in Israel. He understood that he couldn’t compete with sellers of standard mass-produced Judaica items, and needed a niche such as the ketubah. Simultaneously, more customers were asking him to produce commissioned ketubot.

Saipe, who has produced about 1,000 ketubot, said that, based on her conversations with consumers of various ages, the trend of elaborate designs began “somewhere between the 1980s and 2000.”

“There’s a really interesting dichotomy among ketubah artists themselves,” she said, noting that, on the one hand, there are “well-established” artists who produce ketubot with a classic old-world feel, and, on the other hand, there has been the emergence during the last five years of “contemporary” artists who employ “modern symbolism and modern times” in their designs.

What’s the reason behind the trend? The artists agree that customized ketubot are simply indicative of the popularity of personalized art in general, in addition to reflecting the personalization of various aspects of weddings.

“Everyone loves personalized art. This is not a new thing,” said Kaplan, who has created more than 3,000 ketubot since 1998. That said, some couples’ desire to alter and personalize the ketubah’s age-old Aramaic ritual text may also play a role in the trend of commissioned designs, she said.

“Once a couple begins thinking about a text they want that is different from the traditional one on their parents’ ketubah, it may be a natural next step to wanting an art ketubah,” said Kaplan.