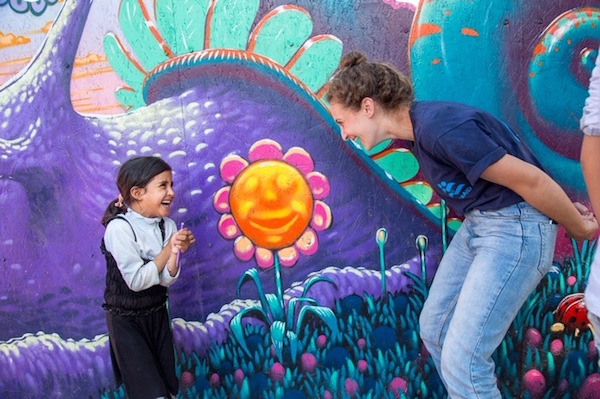 This picture of Molly Bernstein, right, was taken last year at the School of Peace, a program run in partnership by IsraAID and the Israeli Hashomer Hatzair Youth Movement on Lesbos, Greece. (photo from IsraAID)

“I say crisis with air quotes because I think that’s a bad attitude,” Molly Bernstein told the Independent. “It’s an opportunity.”

In discussing the number of displaced people in the world, usually referred to as “the refugee crisis,” Bernstein said, “I strongly believe that diversity is a social good for our societies. When we integrate new people into our communities, we learn more about ourselves and others, build bridges between communities, and build relationships that breed positivity in the world.

“When we open our doors and our hearts to refugees, we’re doing exactly this,” she said. “That’s why it’s an opportunity to expand our worldview and the spectrum of opportunities for doing good that stands before us.”

Bernstein, currently working in the communications department at IsraAID headquarters in Tel Aviv, spoke to the Jewish Independent during a recent trip to Vancouver, Jan. 31-Feb. 3.

“My parents were longtime members of Habonim,” she said, referring to the Zionist youth movement. “We lived in Israel for a time and I became interested in learning Arabic, so as to have a deeper understanding of the conflicts in Israeli society and how to address them. Learning Arabic opened up a lot of doors for me.”

Bernstein completed a bachelor of arts at the University of Maryland, College Park, then lived in Morocco, Jordan and Tajikistan. She began working with an Arab-Jewish Israeli NGO in Israel, the Abraham Fund Initiatives, which focuses on the creation of a shared society, and then landed a job with Ha’aretz.

It was while she was working at Ha’aretz, combing through pictures of the Syrian military’s chemical attacks on Syrian civilians, that she decided she wanted to do relief work. She had heard of IsraAID and considered working for them “an item from my bucket list.” So, when a job opportunity with the organization arose, she jumped at it, and got it. She was sent to the Greek island of Lesbos as head of missions, where she oversaw programs supporting refugees. Six months later, she was promoted to the NGO’s headquarters in Tel Aviv.

“IsraAID started when a group of buddies who were connected and had networks of doctors, nurses [and] engineers, and search-and-rescue folk would organize themselves and fly out and get some work done,” explained Bernstein. “When [the 2010 earthquake in] Haiti happened, they realized they needed a long-term response plan and so they started an NGO to develop that capability. They were in Haiti for eight years.”

Founded in 2001, IsraAID has an annual budget of about $10 million and has worked in emergency and long-term development missions in 46 countries, including the United States. Volunteers with IsraAID, for example, continue to work in Reno, Nev., with evacuees from the wildfires in Northern California. In 2017 alone, IsraAID worked in 20 countries.

As an Israeli aid organization, IsraAID sometimes finds itself in the crosshairs of those who want to view their work through the framework of either Zionist or anti-Zionist ideology. Bernstein said IsraAID is having none of it either way. “We are really just focused on the work,” she said. “Other people may want to raise other questions about it, but we’re just like, OK, you have that conversation, there’s a person I have to help over here.”

That said, the organization’s Israeli base means they have unique contributions to offer. “We are proud to bring technologies from the country we come from,” said Bernstein. “And it’s not a coincidence that we’re really good at water management and trauma processing. Those are two things Israelis have needed to become good at it.”

Bernstein is continuing her academic studies at Tel Aviv University, pursuing a master’s degree in Middle Eastern history, while working for IsraAID. Meanwhile, the NGO is looking to expand the ranks of their volunteers. They’ve opened a headquarters in Los Angeles and Bernstein said another North American base may follow, possibly even in Canada. In Vancouver? “It’s not impossible,” she said.

Humanitarian goods from Turkey arrive at the Kerem Shalom crossing point into the Gaza Strip; it was the first such shipment to arrive in Israel from Turkey since the reestablishment of ties between the two countries at the end of last month. (photo from Ashernet)

The families of Israel Defence Forces soldiers Oren Shaul and Hadar Goldin – both of whom were killed two years ago in Operation Protective Edge and whose bodies are still held by Hamas – were dissatisfied with the reconciliation agreement between the two countries, as it did not include the return of their sons’ bodies or the return of two Israeli citizens, Avraham Mengistu and Hisham al-Sayyad, imprisoned in the Gaza Strip. Many also objected at the apology by Israel to the Turkish government, together with a $20 million compensation package, over the May 2010 IDF raid on the Gaza-bound Turkish ship Mavi Marmara, which resulted in the deaths of 10 Turkish citizens after the activists on board attacked the IDF soldiers; it was this event that caused the break in Turkish-Israeli relations.