Holocaust survivors who came to Canada after the Second World War remade this country’s Jewish community.

Before survivors arrived in numbers, beginning in 1947, Canada’s Jewish community had a few poorly resourced social service agencies. The demands created by thousands of new arrivals – many with significant emotional and physical challenges – spurred the growth of Jewish communal organizations across the country. In turn, those survivors have had an impact on the community in the successive seven decades that is incalculable. The impact of the Holocaust – and the arrival of its survivors – is perhaps the defining factor in the development of Canada’s Jewish community.

“The Holocaust is a watershed moment and the scale of this watershed resettlement was unprecedented,” said Adara Goldberg, a Vancouverite and author of Holocaust Survivors in Canada: Exclusion, Inclusion, Transformation, 1947–1955. “Many of the agencies across Canada only came to be as a result of the Holocaust. Jewish Immigrant Aid Services [JIAS] did exist, but this was a small organization that only dealt with small numbers up to this point. Having some 35,000 people come in, in less than a 10-year span, really trampled the organizations.”

Survivors who moved to the United States joined a vibrant Jewish community already in progress, while those who came to Canada found a Jewish community with little infrastructure. What exists of the Jewish community and its social service agencies today was built, in large part, for the survivors and, subsequently, by them.

To an extent, there was an unwillingness among Canada’s existing Jewish community to address the Holocaust experiences of the newcomers – those who did not experience the Holocaust may have been afraid of opening wounds or been unwilling to hear the horrors others experienced. There was also a history in Canada of immigrants getting off the boats and throwing themselves instantly into building a new life, leaving the past behind.

Still, Goldberg said, there was a recognition by people like the head of JIAS that these immigrants had some very particular needs.

“The problem was availability,” she said. “This is uncharted territory. Social workers themselves and the Canadian Jewish community were only learning with the survivors about how to treat victims of trauma … the idea of post-traumatic stress didn’t really exist.”

Getting the newcomers integrated was not only a matter of meeting social needs, she added.

“There is also a legal element to that,” Goldberg said. “The fact is, refugees who came to Canada under the auspices of either the Canadian Jewish Congress, or who received support from JIAS or who had relatives sponsor them, were liabilities. If they didn’t find work, if they didn’t have a home, if they became dependent, they risked deportation. They risked becoming a drain on the existing Jewish community, which was already really reaching its max in terms of what they could do.”

A symbol of success is that very few fell through the cracks, although many of the case studies in the book indicate that some survivors were miserable in their assigned living conditions or workplaces.

There was a realization after the war, as the magnitude of what would come to be called the Holocaust dawned, that Canada had failed the imperiled Jews of Europe in the 1930s, when there was still time.

“After the war, relationships changed and there was significant international pressure on Canada to help do its part in relieving the postwar refugee crisis of Jewish and also non-Jewish displaced persons,” Goldberg said. “On the one hand, we can say this was a humanitarian gesture.… There’s also a practical element that we can’t overlook in that Canada stood to gain something from allowing in the Holocaust survivor refugees. There was a need for skilled laborers and this is how most survivors did come in, they came in for skilled labor posts, so Canada benefited.”

The equation of immigration and Canada’s need for labor is underscored by the fact that there was no ministry of immigration at the time – until 1950, Canada’s immigration policy was administered by the ministry of mines and resources. The influx of Jewish and non-Jewish refugees postwar familiarized the Canadian government and public to the concept of receiving refugees on humanitarian grounds. The first major instance of this reconsideration came in 1956 after the Soviet Union crushed the democratic uprising in Hungary. Canada admitted 37,000 refugees in the course of a year. 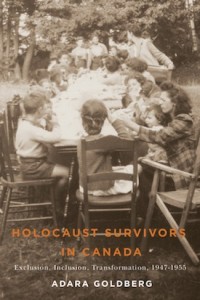 Goldberg’s book begins with a refresher on Canada’s abominable record in the prewar period. Chapters then take on topics such as the unique requirements of young orphaned refugees; the double-edged sword of interned “enemy aliens” – Jews from enemy states, mostly Germany and Austria, whose nationality, in the eyes of Britain and its Canadian dominion, trumped their status as endangered victims of Nazism; the various programs under which refugees were admitted to Canada and how established Jewish communities, especially their women’s organizations, cared for refugees’ personal needs; the creation of social clubs and synagogues by and for survivors; the development of an ultra-Orthodox and Chassidic community here; and “transmigrants,” those who came to Canada after a sojourn elsewhere, often in Israel. She has included the stories of survivors who didn’t want to be found; those whose experiences in Europe led them to hide their Jewishness and their past as they began a new life in Canada. It is a monumental work.

A Toronto native, Goldberg wrote the book in fulfilment of her PhD at Clark University in Massachusetts and, while there are differences between the dissertation and the book, which was published in September by University of Manitoba Press, the book avoids the academic jargon that can exclude ordinary readers.

“As a social history that was created with the research that I did both in archives as well as through interviews and other sources, it was written with a wide readership in mind,” she said.

Goldberg eschews statistics in favor of personal case studies both from in-person interviews and records of social service agencies from decades past. The result is an introduction to hundreds of individuals and their stories, as well as a testament to the resilience of the survivors and the history of a small Jewish community rising – not always flawlessly – to the challenge of welcoming tens of thousands of co-religionists who had suffered unspeakable horrors.

The dissertation took about three years to complete and, after Goldberg moved to Vancouver, where she worked for three years as education director at the Vancouver Holocaust Education Centre, she took the opportunity to do additional research that incorporates more local content. The book is enriched by her background as a trained social worker, which underpins a deep analysis of the successes and failures of social service agencies in those early years.

Refugees are the top global news story today and Goldberg sees lessons for the present in her book.

“It’s a very different crisis,” she said. “I think what we can do is, without trying to compare individual experiences, to remember the risk of nativist attitudes and what happened when Canada had very discriminatory, restrictive immigration policies 75 years ago. Canada accepted the fewest number of Jewish refugees of any country in the Western world … Canada had an opportunity at that time to distinguish itself, to take a very restrictive policy and widen the gates. They could have done this and they elected not to. What we can do now is reflect on the result of this inaction. History does not need to repeat itself. Canada can distinguish itself as a world humanitarian leader.

“Similarly,” she continued, “Holocaust survivors have contributed to all aspects of Canadian society. I imagine that so, too, do other refugees to Canada and so will other waves that come in the future. There is so much that we can gain.”