Not only is there no quick fix to making a relationship work, but there’s no quick fix for absorbing the main points of Avrum Nadigel’s Learning to Commit: The Best Time to Work on Your Marriage is When You’re Single. Its lessons can’t be summed up in a few bullet points – you’re going to have to read it.

That being said, Nadigel will have to make the audience at the Cherie Smith JCC Jewish Book Festival “fall in love with” his book in less than 180 seconds. He’s part of the event A Literary Quickie, which takes place on Nov. 22, 10 a.m., at the Jewish Community Centre of Greater Vancouver. The brunch event lineup includes authors Richa Dwor, A.D. Gentle, Rosa Harris, Revital Shiri-Horowitz, Paula Hurwitz, June Hutton, Evelyn H. Lazare, Olga Medvedeva-Nathoo and Marina Sonkina. Admission is by donation.

Nadigel has been a therapist for more than 15 years. He received his master’s of social work from McGill University in Montreal in 1997, and did post-graduate training with the Western Pennsylvania Family Centre, which teaches Bowen family systems theory. He also received supervision via Skype from author and family therapist Dr. David Freeman (who died in 2010). In Learning to Commit, Nadigel doesn’t just offer theories, but advice gained from personal and professional experience. Advice that changed his life, and he’s hoping it’ll help others.

Though Nadigel only lived in Vancouver for about six years, from 1999 to 2005, it was here that he first encountered Freeman, who was speaking at a singles event at the J. His words had a profound impact on Nadigel.

“For all I thought I knew about relationships (I was a practising therapist at that time), Freeman debunked many of my own assumptions, for example, that poor communication is the cause of relationship problems,” writes Nadigel. “He introduced novel ideas about romantic love, providing subtle warnings that the very things that cause a young lover’s heart to flutter can, down the road, be the catalyst of dissatisfaction and divorce. He encouraged us to focus on our own interests, because the more interesting we are to ourselves, the more we have to bring to the table in our relationships.”

Nadigel had come out west, lured by the Rocky Mountains. “From that moment on,” he said, “I knew I had to live near mountains, but also in close proximity to a Jewish community. Vancouver was an easy choice.”

He told the Independent, “It was a total ‘head west young man’ move. I was 30 years old. I sold everything I owned, loaded all of my guitars, some clothes and CDs (remember those?) and headed west. No job, no family, no relationship and only one friend in B.C.

“For money, I worked as a child protection worker, and then as an addiction therapist and family therapist…. Most importantly, I took courses at Emily Carr, composed music for films and learned how to mountain bike.”

He also came here to meet a local Jewish woman but, he said, “true to [his] commitment-phobic self,” he “couldn’t find anyone in Vancouver (or Victoria, Seattle or Calgary) to settle down with.” Eventually, on frumster.com, he met the woman who would become his wife, Dr. Aliza Israel – from Richmond. At the time, she was living and studying in Toronto. “Anyway, we dated long-distance (perfect for a commitment-phobe), and then I agreed to move wherever her residency would be. She was accepted into the Toronto psychiatry program, and the rest is history.”

The two were married in June 2007 at the J here because that’s where Nadigel first heard Freeman, which led to his rethinking about marriage and other things. “The JCC in Vancouver holds a very special place in my heart,” he said.

And so still does Freeman, one of the people to whom Learning to Commit is dedicated, “for providing me with a lighthouse; a way to navigate the rocky seas of my relationships.”

At least one of the ideas in the book seems counterintuitive – the admonition to not compromise.

“Too many relationship books/ speakers assume that compromise is the key to a successful relationship, and so our culture embraces this opinion – and that’s all it really is. And good people use this to avoid growing … discomfort, fear, etc.,” explained Nadigel. “Compromise is no virtue if it’s the first thing you reach for to avoid difficult discussions or situations. Now, more mature people are able to compromise without feeling like they’re betraying their values/principles, because they’re clear on what they stand for, and what they won’t put up with. They won’t compromise on big-ticket items, and will be willing to face the sting/consequence of staying true to their principles.” 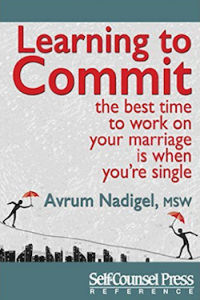 In Learning to Commit, Nadigel writes, “According to Dr. Murray Bowen, togetherness and individuality are two opposing forces that we are all born with. We spend the rest of our lives trying to reconcile their often-contradictory impulses.” A well-differentiated person – someone who is confident of their values and principles, and doesn’t change their opinion or action “just to defuse tension” is able to balance those opposing forces.

“Differentiation is not selfishness,” stressed Nadigel. “It is not about a focus on my needs, damn everyone else. It’s about living a life guided by well-thought-out principles, some of which will address who I want to be/act/think with my partner, children, parents, colleagues, friends, etc. It’s about balancing feelings with good, clear thinking. Actually, one could say that immature, high-feeling-centric people are so fragile that the mere thought of considering another person’s point of view is crushing, whereas higher differentiated people can choose to be guided by their partner’s best interest. But the key here is choice!”

The lessons in Nadigel’s book are relevant for all relationships – in fact, he writes, “one of the main tenets of family systems theory [is]: ‘You will only succeed in future relationships in ways you have already succeeded with your parents, siblings and/or extended families.” They are also useful in dealing with controversy or difficult issues, in developing the ability to hear what you need to hear, even though you may not want to hear it.

To remain open, he explained, “you need two things – curiosity and (if possible) playfulness. These things are very hard to come by in high-tense situations, i.e. acrimonious marriage, Middle East discussions, anything involving high emotions mixed with perceived/real threats. Which is why I believe, as a blogger recently noted while discussing my book: ‘Doing some self-examination and exploration … while we are single might be the best marital therapy we’ll ever have.’ Curiosity and playfulness is much more likely when we’re single, or dating, than when mired in the marital muck of resentment, etc…. I think the best that one can do – in any area – is to share your thoughts as clearly as possible, and without any expectation that people are going to support your thinking or applaud your efforts. When you think about the qualities of great leaders/leadership, these attributes apply.”