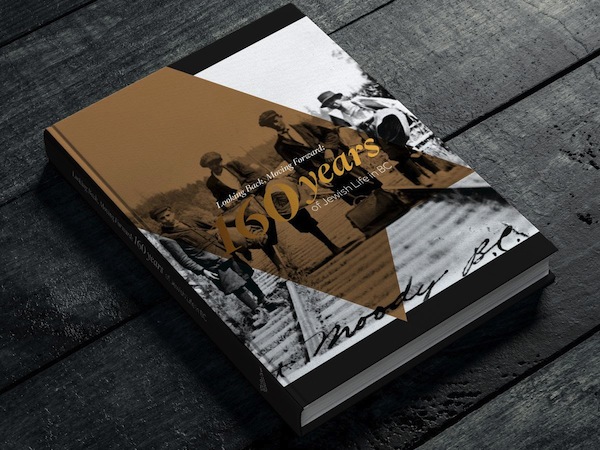 Looking Back, Moving Forward is available for purchase from the Jewish Museum and Archives of British Columbia. (photo from JMABC)

The first thing many readers will do upon opening the Jewish Museum and Archives of British Columbia’s Looking Back, Moving Forward: 160 Years of Jewish Life in BC is try and find their friends’ writeups and those of the organizations with which they volunteer or work. That is, if they didn’t submit their own writeup for the publication. If they did send in their bio or one for their family, then that’s the first page to find.

Even people who grew up in the province and have a multigenerational presence here will find novel tidbits in this 284-page hardcover (or soft) coffee table book. Published to celebrate the museum’s 50th anniversary last year, it is appropriately dedicated to Irene Dodek (1930-2019) and Cyril E. Leonoff (1925-2016). Leonoff was founding president of the Jewish Historical Society of British Columbia, which was established in January 1971. Dodek, also a founder of the museum and archives, “helped define its direction early on and conducted more than a hundred oral history interviews with members of our community.” More about Dodek and Leonoff can be found in the first pages of the book, before the greetings from Prime Minister Justin Trudeau and Premier John Horgan.

In her president’s message, Carol Herbert writes, “Our stories are fascinating, and demonstrate the evolution over time of our communities, from a few small clusters of Ashkenazi Jews from Eastern Europe in late 19th century to present-day diverse Jewish communities, comprised of individuals who originated from across the world; Sephardic, Mizrahi and Ashkenazi; secular and religious; leaders, activists and advocates for Jewish and general community causes.”

Both Herbert and the book’s editor, Michael Schwartz, director of community engagement for the JMABC, acknowledge that this publication is a partial snapshot of the community. They both encourage readers who haven’t done so yet “to share your memories of where we’ve been, celebrate with us where we are, and join us in envisioning where we might be headed,” writes Schwartz.

A chapter on the history of the JMABC begins the book proper. It is followed by brief regional histories – Victoria, Vancouver, Kootenay/Boundary, Okanagan, Prince George, Sunshine Coast, Central Vancouver Island and Whistler. The chapter on organizations is divided into those that work in advocacy and activism; religious observance; education; youth groups and camps; seniors; arts, culture and leisure; Zionism; Holocaust education; and anchor organizations. That last one, by the way, is where you’ll find the Jewish Independent (pages 126 and 127).

Looking Back, Moving Forward offers a broad overview of many of the major players in the B.C. Jewish community over the 160 years since Jews first arrived here. It focuses on accomplishments and takes readers right up to 2021. It is easy reading, and no one need worry that any dirty laundry is aired. Given the celebratory nature of the book, none of the submitters (including the JI) talk about the challenges they’ve faced or controversies, and neither do any of the introductions to the various sections.

Some history is given only passing mention, such as what community fundraising structures were in place prior to the Jewish Federation of Greater Vancouver’s emergence in 1987, for example, but the book isn’t meant to be a comprehensive historical tome. Rather, it’s a fun, page-flipping community yearbook of sorts, which will hopefully motivate people to both learn more about the community and contribute their stories to its archival record.