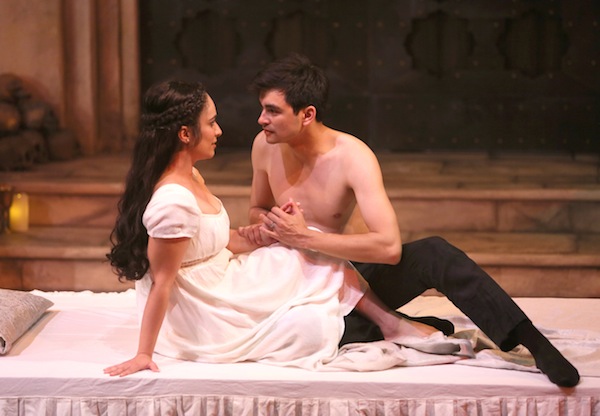 Ghazal Azarbad and Daniel Fong in Bard on the Beach’s Romeo and Juliet, which runs to Sept. 24. (photo by Tim Matheson)

William Shakespeare’s tragic love story, Romeo and Juliet, about teenaged lovers who come together despite the objections of their families, resonates with contemporary audiences as much as it did with the Elizabethan crowd.

Since it was written in 1595, ˆ has spawned countless adaptations, including the musical West Side Story, the animated feature Gnomeo and Juliet, and even a Palestinian girl meets Israeli boy version. So how do you present this well-known tale from a different angle? You do what director Anita Rochon did for this year’s Bard on the Beach production – start at the end, when Juliet wakes up in the family crypt next to dead Romeo, and flash back to the beginning. As well, tell the story from Juliet’s perspective, as she grapples with the question of how this situation came to be.

Rochon has taken some creative liberties with Shakespeare’s text, nipping and tucking here and there, and leaving out the characters of Lord Capulet and the Montague parents. Purists may not appreciate that surgery but will like that the play is set in its proper era. However, if you don’t know the story, the time line is a bit confusing, as the scenes jump around a bit, unlike the linear unfolding of the original text, so you should read the program summary beforehand.

From the minute you walk into the small tent and are met with the sight of the set, you know you’re in for a treat. Front and centre is an elevated marble-like tomb surrounded by 300 skulls strategically stacked around the macabre crypt, all bathed in flickering candlelight. The crypt’s massive iron doors open and close on an ever-changing backdrop as actors make their entries and exits. The tomb disappears into the ground on scene changes while a balustrade rises from the ground for the iconic balcony scene. Kudos to set designer Pam Johnson for a job well done.

The acting in this production is also first rate. Each and every one of the nine actors gets the job done. Daniel Fong as Romeo, Ghazal Azarbad as Juliet and Jennifer Lines as Lady Capulet are particularly strong in their roles. Fong nicely portrays the naïve confusion of the young swain while Azarbad shows strength of character and resolve not normally seen in depictions of teenage girls. The chemistry between the eponymous duo is palpable.

But it is Lines – morphing from gracious and charming party host to ferocious tiger mother when she gives Juliet the disinheritance ultimatum – who captures the essence of the play’s unspoken dilemma: Do we marry who our parents/families pick for us or do we marry who we love, no matter the consequences.

In a nod to role reversal, which seems to be the flavour of the season for Bard, Andrew McNee plays Juliet’s nurse, Sara Vickruck does double duty as the doomed Mercutio and the Apothecary and Anita Wittenberg plays Friar Laurence. McNee is one of the best comedic actors this city has, and his antics on the boards inject much-needed comic relief into an otherwise dark script.

Raising the production to sublime are the costumes (richly coloured, textured gowns for the ladies and sexy doublets and britches for the men), the dramatic lighting and the trio of choreographed sword fights – all backgrounded by the haunting tones of handheld bells that herald scene changes.

As Rochon points out in the program notes: “We know how their story ends and, in a way, we know how all our stories will end. The way we get there is where the mystery begins.”

You don’t have to be a hopeless romantic to appreciate the beauty of this production, which runs to Sept. 24 on the Howard Family Stage at Vanier Park. For tickets, visit bardonthebeach.org or call 604-739-0559.