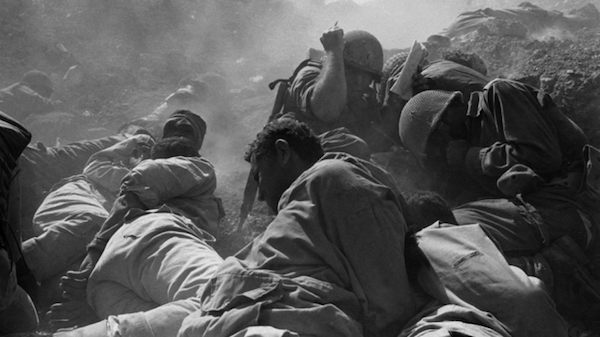 Image from 1341 Frames of Love and War, a photo by Micha Bar-Am.

Photographer Micha Bar-Am, now 92, is considered perhaps the foremost visual chronicler of Israeli history. In 1341 Frames of Love and War, filmmaker Ran Tal creates what amounts to a family reminiscence among Bar-Am, his wife Orna and sons Barak and Nimrod, complete with snippy retorts and full-throated arguments. All of this is set against thousands of Bar-Am’s photos, creating a barrage to the senses of blown-up buses, dancing hippies, funerals and the scope of Israeli life captured in still photos. The family, whose voices make up the narration of the documentary, are seen only in the pictures.

Although Bar-Am was present to immortalize in images the Eichmann trial and the liberation of the Western Wall, his work is mostly of ordinary Israeli people and events, including war, which has been all too “ordinary” for the country and its people. The photos predictably begin in black-and-white – the first colour photo in the film appears during the 1967 war, perhaps not merely a sign of changing technology but also of the before and after times of the occupation.

A photo from the time – an image Bar-Am captured of a soldier praying at the newly liberated Kotel – is a prism through which Micha and Orna chronicle their own changing views of their country. The soldier had fashioned an ammunition belt into a makeshift prayer shawl. Orna explains how they loved the photo at first, apparently as a symbol of resistance and survival. After a few years, they came to detest it as a representation of the connection between religion and power. Now, in their later years, they are agnostic about the thing.

Bar-Am acknowledges that he was a shy young man and the camera was an excuse to get closer to things, to understand people better. Through his eyes, and the immortality of his images, Israelis and others can perhaps view themselves and the world around them more closely.

The film is an intimate exploration into the work of a legendary craftsman and, through him, a snapshot into the past.