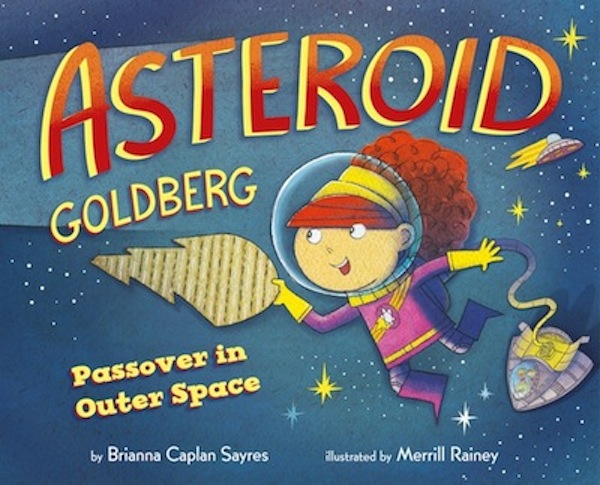 I review a lot of books for the Jewish Independent. Over the years, that has included many children’s books. I do my best in these instances but, as much as I like to let my inner child run free occasionally and as much as I’d one day like to create a children’s book or two, I’m a grown-up. What do I really know about how enjoyable the single-digit-age set will find a publication? Well, for my latest two reviews, I turned to a couple of experts for advice.

With COVID-19 causing the shutdown of schools, my youngest nieces – Fae, 8, and Charlotte, 6 – were suddenly available to be put to work. With their parents’ blessing, nay, encouragement, I scanned and emailed them two recent books published by Intergalactic Afikoman (see jewishindependent.ca/new-publisher-set-to-launch). The assignment was to read Asteroid Goldberg: Passover in Outer Space by Brianna Caplan Sayres and illustrator Merrill Rainey and Such a Library! A Yiddish Folktale Re-imagined by Jill Ross Nadler and illustrator Esther van den Berg. As my nieces were new to the reviewing world, I gave them a handful of questions to answer: What did you like about the books? What did you not like? What did you learn? Would you recommend the books to your friends?

Their mother, Deborah Weiss, sent me summaries of their answers, as well as Fae’s handwritten responses – I’d asked her to be the family’s scribe for the job.

They started with Asteroid Goldberg, which features Asteroid and her parents on their way home from Pluto for the Passover seder. When the family gets to earth’s orbit, they are not allowed to land (for an unstated reason), so they must make alternate seder plans on the fly (pun intended). A few of Jupiter’s moons for kneidl, a piece of Saturn’s rings for matzah, the Milky Way as their pantry. Who to invite? Family members close by, including Grandma Luna, who was biking on Venus, and Uncle Cosmos, who was hiking on Mars. When they come to the Mah Nishtanah, Asteroid asks, “What makes this night so different?” to which the answer is “Everything!” Caplan Sayres couldn’t have known how relevant her Passover story would be this year.

Both Fae and Charlotte loved the story and the artwork. Even though Charlotte found it a bit too long, Fae recommended it for kids 7 and under.

As for lessons learned, Fae “did not learn anything.” However, her sister, who can be a pistol, said she learned that one should “never go on a rocket before Passover.”

As for their mom’s thoughts, Deb said, “I really liked this book. As we get ready for a Passover that will be very different this year, I loved reading about a family that had to change their Passover plans and still had lots of fun and found new ways to celebrate. This really resonated with me!”

Deb and the girls also enjoyed Such a Library! “I thought this was a really clever and imaginative take on a well-known folktale,” said Deb, who noted, “Both girls liked the funny text, the story and the artwork. We also liked the clever name of the librarian.”

In Such a Library!, Stevie heads to the public library to read his book – “With three brothers, two sisters and a baby at home, Stevie’s house was never quiet.” As he starts to read, though, he hears pages turning, computer keys tapping. He tiptoes to the librarian, Miss Understood, and says, “This library is too noisy.” He tells her, “It’s like a party in here.” Thinking that a party sounds like a wonderful idea, she opens a book: “Hundreds of colourful balloons flew from the pages, followed by party hats and horns.” 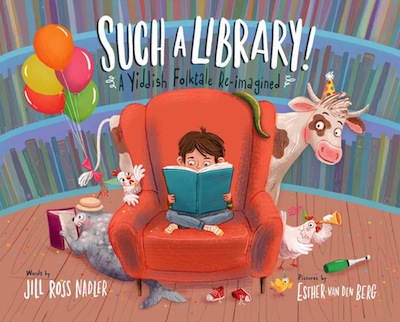 Each time Stevie goes to Miss Understood to complain, she opens another book and the library becomes a zoo, then a circus, as the characters jump out of the pages of the books she opens and take over the library. Only once the characters are all returned to their books can Stevie enjoy reading his, to the relatively quiet sounds of the pages turning, computer keys tapping.

Such a Library! is an interpretation of the Yiddish folktale about a man who thinks that his small house is too crowded with his wife and many children. The rabbi recommends that the man also bring into the house the family’s cow, chickens, goats, geese and ducks. When the man can’t take it anymore, the rabbi tells him to kick out all the animals, after which, the small house seems quite big and spacious.

As for what the girls learned, Deb said, quoting Charlotte, “We learned that, if you’re looking for a quiet place to read, to not to go to the library when it’s full of acrobats!”

To order either book, visit intergalacticafikoman.com/books.