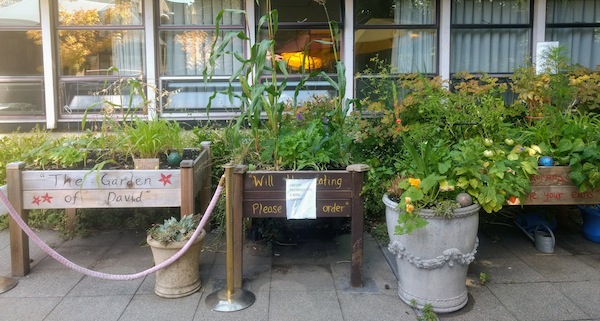 The garden in the courtyard of the Louis Brier. (photo by David J. Litvak)

It hasn’t been easy for any of the staff and companions working at Dr. Irving and Phyliss Snider Campus for Jewish Seniors – which comprises the Louis Brier Home and Hospital and the Weinberg Residence – during the pandemic. Nor has it been easy for the residents and their families. However, seeing a 100-year-old Holocaust survivor happily walking down the hall or a beaming bubbe (who was born in Lithuania) wheeling herself from one end of the facility to the other, or another resident greeting everyone with a hearty “Aye Yai Yai,” I can’t help but smile. Despite the challenges, we have been lucky here, so far, to have escaped the worst of COVID-19.

My pandemic journey at the Louis Brier began in January, when I was hired on a permanent, part-time basis as a mashgiach (kosher supervisor) during an influenza outbreak that foreshadowed what lay ahead. I was hired to replace one of the Brier’s longtime mashgiachs – the facility employs two on a part-time basis – and I had big shoes to fill. The previous mashgiach not only provided kosher supervision in the kitchens but entertained residents with his piano playing, puppet shows and conducting of services in the Louis Brier synagogue on Saturday mornings and weekdays.

Being employed as a mashgiach at the Louis Brier during the pandemic has had many challenging moments – slicing meat and deboning turkey were particularly painful for me because I am a vegetarian, but, luckily, I am no longer required to perform those tasks. Anyways, prior to the pandemic, Shabbat services would be held on Saturday mornings, with a Kiddush lunch afterwards that featured herring, gefilte fish, pastries, challah and grape juice. It was a real highlight for the residents, particularly the lunch. However, due to the pandemic, the weekly services and special meal were canceled. In addition, the monthly Shabbat services that were led by Cantor Yaacov Orzech and the Kol Simcha Choir were canceled, as were Friday night services. It is only recently that Louis Brier chaplin Chazzan Rob Menes has resumed the Friday night services and, in response to a personal request from one of the residents, informal Saturday morning services have also returned.

On Rosh Hashanah, a full service for the residents was offered, thanks to Richard Wood and Adam Ben Dov, members of the Louis Brier’s religious committee, and Rabbi David Rosenfeld of Chabad, who sounded the shofar for the residents. Menes has been blowing the shofar every morning at the Louis Brier, as well as at the Weinberg Residence, on occasion. While no family members were able to join the services, Rosh Hashanah was celebrated, albeit in a low-key manner.

Other holidays that have occurred since the pandemic have also been observed quietly. Passover at both the Brier and Weinberg was particularly stressful, as kosher-for-Passover products that would normally be available could not be ordered. The facility’s food services manager valiantly persevered to make sure people were provided kosher food during the holiday, however, and the other mashgiach and I – with the help of Rabbi Mendy Feigelstock and Schneur Feigelstock of Kosher Check – worked to keep the home kosher and chametz free. It wasn’t easy. It was a subdued Passover in another way, because the seders at the Weinberg were canceled to ensure that the residents were kept safe from the virus.

That has been the underlying principle since the pandemic began – keeping residents safe. From the outset in March, the Louis Brier’s chief executive officer, David Keselman, has shown foresight. For example, he canceled the annual Purim Megillah reading and Purim parties, which would have taken place just as the coronavirus was taking off.

In addition, from the outset of the outbreak, companions and other employees at the Louis Brier have been prohibited from working at more than one job. These decisions and the dedication of the staff and administration ensured the safety of the residents. Not one resident of the Louis Brier or the Weinberg Residence has contracted the virus.

To show his appreciation of the job that has been done at the Louis Brier, one resident, a fellow North End Winnipegger, nominated the administration for the Order of British Columbia, the Order of Canada and the Nobel Peace Prize. The resident, who started the badminton club at the home and maintains a tulip garden in its courtyard – the only outdoor space residents have been able to go for fresh air during the pandemic – marveled at how lucky he and other residents are. In the Daily Blah, a newsletter he published, he noted: “The Louis Brier does not have the virus, has a beautiful garden and we can play badminton.”

While it is true that the residents have been physically safe and have not contracted the virus, the pandemic has taken a psychological toll on everyone in the building. Until recently, due to provincial prohibitions, residents were not allowed outside visitors, other than seeing loved ones through the glass of the front lobby, and talking to them on their cellphones. Now, residents are allowed to have scheduled visits with loved ones outside the front entrance of the Louis Brier and outside the Weinberg, as well. It is a small victory that will hopefully boost the morale of the residents.

As for me, I just keep thinking of 100-year-old Louis Brier resident who tells me that, as long as he can eat, talk and walk, it’s a good day! The resilience of residents like him reminds me to always be grateful for the basic things in life.