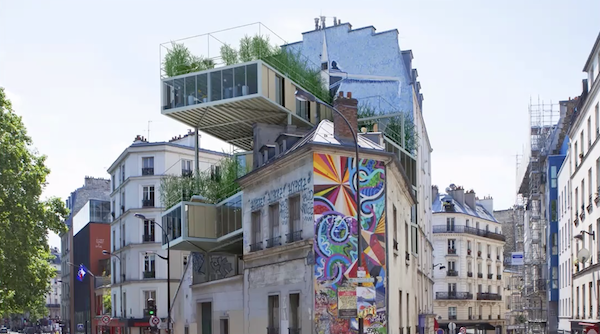 In his December presentation, Michael Geller showed this photo of a building in Paris, where modular housing was added atop an existing apartment building to provide more units.

“I think sometimes you have to create land,” Geller said. Looking at Vancouver from above, he said, you see a lot of green and a lot of blue. But you also see a lot of grey. Making better use of parking lots, rooftops, the top levels of parkades and underused space around existing buildings are among the ways Geller imagines we can create more space for housing.

Geller spoke at Tikva Housing Society’s annual general meeting, held virtually on the first night of Chanukah. Tikva is a nonprofit society that provides access to affordable housing, primarily for Jewish low- to moderate-income adults and families. Its vision is “a safe, stable and affordable home for every Jewish person who needs one in Greater Vancouver.”

In honour of the eight nights of Chanukah, Geller offered up eight ideas, including building houses like we build cars – in factories. Also, taking the concept of laneway housing to new heights by allowing the construction of housing on parking lots. And designing apartments that can be divided into two studio suites or opened up to create family accommodation. Plus, matching people who live alone, or in a couple, and have extra bedrooms in their house to connect with people who need housing.

He showed one instance of a high-rise complex in West Vancouver where two new low-rise buildings were constructed amid the landscaped gardens around the older buildings.

Geller was an early adopter of the concept of modular housing, having written a thesis on the subject in university. Modular housing consists of units manufactured and moved as completed (or mostly completed) structures to their temporary or permanent sites. He showed a photo of a building in Paris, where modular housing was added atop an existing apartment building to provide more units. The top levels of many urban parkades might make ideal locations for modular housing, he said, since few people park there unless the entire structure is full.

In European countries – Geller is doing work in Russia at present – families use space for more than one purpose, allowing better utilization of limited footage. Student accommodations, he suggested, could be developed by transforming a living area into a second bedroom through a pocket door or similar. Larger apartments could be made more flexible with extra external doors and tiny kitchenettes that allow one apartment to become two smaller ones – or those two smaller ones to be easily retrofitted for a growing family. He called these types of lock-off suites, “a mortgage helper in the sky.”

Identifying new municipal, provincial and federal lands for affordable housing is another option.

“I really like golfing at Langara,” Geller said. “But, I must say, if you were to take a 40-foot strip off that golf course all the way along Cambie Street, you could create a lot of land, which could be used for affordable housing and some market housing to support the non-market housing.”

He admitted that some of his golfing friends might think this is a terrible idea.

Many of Vancouver’s older residents are “over-housed,” according to Geller, meaning that one or two people might live in a three- or four-bedroom home. Not everyone would be comfortable sharing their home with erstwhile strangers, he admitted, but some would.

Another idea Geller mooted was “the Tikva Suite.”

“Maybe we should start a program where we basically approach every member of the Jewish community who owns an apartment building and say, rent us a suite, give us a suite, and the clever accountants in the community can work out some way so there can be a tax receipt for this and that way you can have a suite in every one of those buildings,” he said. “It’s a dream, but many of the dreams I’ve had over the last 50 years actually do materialize. They take awhile, but this is not such a crazy idea.”

Geller is a planner, real estate developer and retired architect with five decades of experience in the public, private and institutional sectors. He is adjunct professor at the Simon Fraser University Centre for Sustainable Development.

Beginning with a seven-unit building in South Vancouver in 2007, Tikva Housing Society has grown to support the housing needs of 288 individuals. The society provides housing directly through three complexes – with another under construction – as well as through rent subsidies. The AGM heard that the society has net assets of about $2.6 million.

At the meeting, outgoing chair Shelley Karrel announced the launch of a new Jewish Housing Registry, an online platform for people who are looking for housing. It is a partnership between Tikva, Jewish Family Services, Jewish Federation of Greater Vancouver and the other Jewish housing societies: Vancouver Jewish Building Society, Yaffa Housing Society, Haro Park Centre and Maple Crest Apartments (which is under the auspices of Royal Canadian Legion Shalom Branch 178). The registry will provide a single source for housing applications and will also provide partners with a more accurate way of determining the scope of the community’s housing needs. (See jewishindependent.ca/jewish-housing-registry-live.)

The 2011 Census reported 26,250 people in Metro Vancouver’s Jewish community, of which more than 16% reported incomes below the low-income cutoff, giving Vancouver the second highest rate of Jewish poor in Canada. Average rent for a two-bedroom apartment in Metro Vancouver is more than $2,000 a month and the vacancy rate is about one percent.