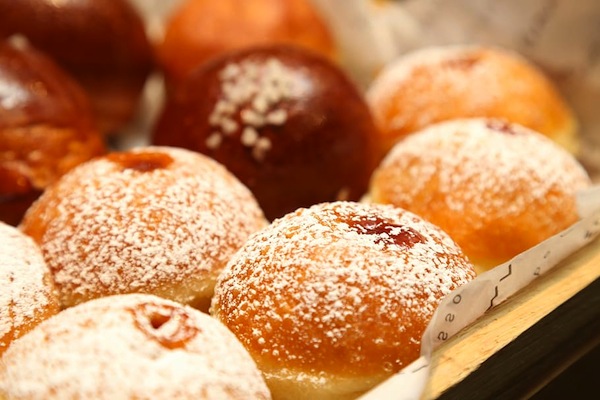 As a child, I looked forward to latkes and gatherings round the stove at my grandparents’ house, homemade sufganiyot – the jam-filled deep-fried doughnuts, consumed exclusively and excessively on this holiday – and the week-long vacation from school. Needless to say, my romantic view of Chanukah was somewhat tarnished as I reached adulthood only to realize that Chanukah is considered a vacation for schoolchildren; for university students and working normal folk, it’s business as usual, plus sufganiyot, plus kids. Living in Israel, a country that demands a lot of sobering up as you reach adulthood, I still count this as one of my top three.

The origin story of Chanukah frames it as a holiday of miraculous intervention. Chanukah songs and school teach us that this holiday is all about chasing away the darkness – most appropriate, given its wintery timing – and the Maccabees and their ferocious war of rebellion against the Greek-Hellenistic Seleucid Empire. We have the admirable protagonist of Judah Maccabee, waging his David vs. Goliath-like war against the archvillain of tyrant Antiochus IV Epiphanes, famous in Jewish lore for his relentless persecution of the Jews. And, of course, there’s the miracle of the oil: as the victorious Jews returned to purify the recaptured Temple, the tiny amount of oil they had miraculously lasted for the eight days it took to do so. This talmudic tale is the source of the modern eight-day celebration of Chanukah centred on the ritual of lighting the chanukiyah, adding a candle with each day.

These mythical tales reinforce the traditional Jewish narrative of a war of independence, and the few fighting and winning against the many, with the aid of a heavenly power. As a Jewish holiday, Chanukah joins the lore of religious and cultural oppression, a fierce tale of valour with a great hero in Judah Maccabee, and a grand finale celebrated in the Temple. Its roots also lent themselves perfectly to creating the holiday’s traditions; the oil from the lamp becoming a staple in both foods and in lighting the chanukiyot, when those were still oil-based, as well as holiday songs equating this religious war with chasing away the darkness.

With time and as with many holiday traditions, the modern celebrations of Chanukah grew to outshine these origin stories. This is partly helped by the holiday’s lack of family traction – no vacation time for grownups, no prescribed big family meals like on Rosh Hashanah or Passover – leaving more room for personal traditions to form and for purchasable items or foods to take centre stage. Our traditions become lighting the candles with our roommates or sharing fancy doughnuts with our work colleagues.

For me, the loose nature of Chanukah tradition also represents the growing pains of adulthood, as we’re freed to make, or burdened with constructing, our own traditions with our own families and friends. A lot of this comprises practical choices, like who to celebrate with and where, but, in the broader perspective, this is our way of connecting, or disengaging, from our community. A way of choosing our group of peers, perhaps redefining some set-in-concrete values we never considered were malleable along the way.

Chanukah provides us with an opportunity to redefine some of those traditions along with their meaning, reshaping them according to our personal beliefs and faith. Take the Chanukah narrative, for example. Do we continue to raise our children on tales of Jewish plight and persecution, of wars as heroic, of the Temple as an utmost goal worth sacrificing our lives for? Are stories of male combative heroism the most important lesson we want to teach the next generation? Is religious separatism still an essential value, or how do we tell this tale while encouraging pluralism and tolerance? And where are all the women in these stories? (There is the tale of Judith and her beheading of opposing military leader Holofernes, which is a rare account of female heroism in a terribly masculine world.) Essentially, how do we create a more challenging version of the holidays and still allow our children, and ourselves, to enjoy these traditions, not losing our sense of community as we go?

In a way, it’s fitting that the main paraphernalia of Chanukah – the chanukiyah, has also historically been a vessel for establishing Jewish identity in the Diaspora. As one of the few items used in Jewish ritual that doesn’t have a Christian parallel (like a censor or chalice, for example), the artists making these objects were free to use any type of decoration, as there was no risk the object would be mistaken for a non-Jewish item. Thus we find chanukiyot with the eagle of the local Austro-Hungarian emperor, architectural flourishes resembling renowned local structures – be they churches or mosques – or even the Chanukah tale of Judith beheading Holofernes. There are Moroccan chanukiyot made of reused sardine cans, as this was a predominantly Jewish industry, Italian chanukiyot featuring animal hybrids and putti (baby angels common in Italian

Renaissance and Baroque art) and Israeli chanukiyot with the Israeli flag. (The Israel Museum has an impressive collection of Chanukah lamps, museum.imj.org.il/stieglitz.)

As the questions of reestablishing our communal and individual identity remain, the grounding of Chanukah in our everyday world is often found in much more earthly places. In recent years, sufganiyot have easily become the unsung heroines of new Chanukah traditions. Bakeries and cafés are finding ways to make their doughnuts progressively outrageous with each passing year, adapting them to the millennial taste for opulence, decadence and quick satisfaction, since who knows what tomorrow might bring. It might not be a perfect solution, but it is undeniable that existential quandaries are best answered while consuming vast amounts of deep-fried, sugary foods while singing songs in the candlelight.

Avia Shemesh is an art history PhD student, studying medieval Spanish art, and living in central Israel. She is passionate about anything to do with art and culture, and loves to write about the ways we interact with the visual world around us and with one another. When not working or writing, she likes to travel, bake and go to yoga classes, like the borderline millennial she is.