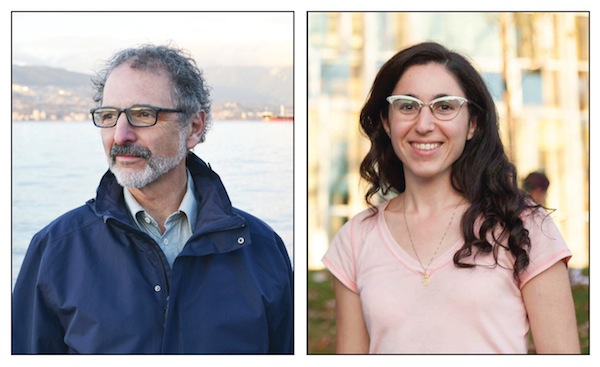 Dr. Larry Barzelai and Maayan Kreitzman will talk about environmental activism at Limmud on March 1. (photos from the interviewees)

Environmental activism is among Canada’s top news stories in recent days and the issue will be confronted from both a Jewish and a broader perspective by two leading voices at Limmud Vancouver next month.

Dr. Larry Barzelai, a Vancouver family doctor, assistant professor at the University of British Columbia’s faculty of medicine and B.C. chair of Canadian Association of Physicians for the Environment (CAPE), will present alongside Maayan Kreitzman, a PhD candidate at the Institute for Resources, Environment and Sustainability at UBC. The pair acknowledges that they come at the topic using different tactics, but aim for the same objective.

Kreitzman has been among those blockading the port and traffic.

“The actions happening in the streets right now are in response to this Coastal GasLink natural gas pipeline construction on Wet’suwet’an land,” she said. But this is only one element of the much larger picture, which is that oil and gas development is “occurring unabated and greenhouse gas emissions and ecological destruction is continuing unabated throughout the world, when we know that these activities are threatening our life-support system and are putting billions of people at risk over the next decade. People are already being impacted today.”

The issue brings together a host of concerns, she said, including “indigenous rights and sovereignty, the Canadian government’s complicity in a climate-unsafe future … as well as the business side of that from the private sector.”

Kreitzman has heard the complaints that disruptive protests may turn off potential allies and anger the general public.

“I think people’s emotions are valid and there is a valid concern about disrupting ordinary people that need to make a living and need to take care of their families,” she told the Independent. “On the other hand, I think many of the people that sometimes make these kind of complaints aren’t really the people that are struggling to feed their families. People that come from a place of privilege need to recognize that these protests inconveniencing them is a small price to pay for the types of progressive changes that will benefit all of us, including their children.”

Kreitzman said she and Barzelai will “bring a concise summary of the latest science to people so that they really understand the magnitude of the situation that we’re in.”

She said, “We’ll be speaking to a spectrum of different actions, from the personal to the more conventional campaigning type of approaches, like report-writing, research, lobbying, letter-writing, to direct-action approaches, which is what I’m most interested in, where people that have privilege start putting their bodies on the line and breaking the law on purpose, using the message of nonviolent civil resistance, which has been successful in many movements throughout history.”

“Climate change, which we’re calling a climate emergency, is upon us,” he told the Independent. “It’s dramatic and we have to take big steps to do something about it. Maayan is taking a bit more radical approach to this. Myself and my group are a bit more middle-of-the-road, shall we say, but I think we both have the same endpoint in mind – that things have to change dramatically.”

CAPE, which has been around for about 25 years, focuses on the health impacts of environmental decisions and climate change.

“We see diseases that are spreading, we see cancers that are becoming more rampant, we are seeing the floods and the wildfires and the temperature changes that are dramatically affecting people’s health and we figure it’s our responsibility as doctors to look at climate change from a health perspective and to inform people of what’s going to happen unless we make dramatic changes,” he said.

Fracking is one area where he thinks British Columbia is “really going down the wrong path.”

“They’ve bought this myth that natural gas is clean energy, which it is absolutely not, and they are doing their best to increase rather than decrease global warming, and we think that’s the crucial issue that needs to be discussed in Canada and especially in B.C.,” he said.

Kreitzman and Barzelai will speak at Limmud Vancouver on March 1.