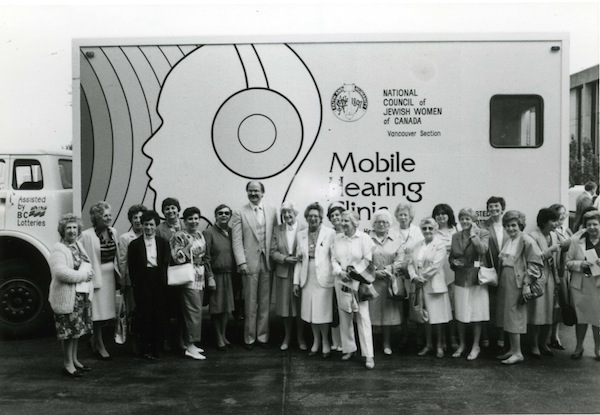 Then-Vancouver mayor Mike Harcourt and members of National Council of Jewish Women in front of the first Mobile Hearing Clinic, outside Vancouver City Hall on June 11, 1984. After raising the funds to build and operate the clinic on a trial basis, NCJW sold it to the provincial health department for the nominal price of $1. They did the same with a second mobile clinic in 1986. (photo from JMABC L.16459)

Passover is one of the foundational stories of Jewish tradition. Around the seder table each year, we learn from our elders the guiding principles of Jewish life: how to be a good person, think of others and pursue justice in the face of persecution.

These same themes can be found in the history of our community locally. The families who laid the foundations of our community, and those who continue to build its future, arrived here from all corners of the world. Mutual aid societies like the Hebrew Free Loan Association (HFLA) and the Jewish Federation of Greater Vancouver (preceded by the Jewish Community Chest and the Jewish Fund and Council) have helped welcome and support new arrivals.

The HFLA was established in 1915 by Solomon Weaver and, while it folded in 1936, it was revived in 1979 by the Jewish Family Service Agency under the leadership of Shirley Barnett. Going at first by the name of the Hebrew Assistance Association, the organization was established to aid a new wave of Jewish immigrants arriving from Russia. With initial capital provided by Joe Segal, Jack Diamond, Morris Wosk and Leon Kahn, the association began issuing loans of up to $3,000. To date, the HFLA has granted more than 2,000 loans, giving people “a hand up, not a hand-out.”

Passover also teaches us that we should apply these principles beyond our own community. As it is written in Exodus: “You shall not oppress a stranger, for you know the feelings of a stranger, having yourselves been strangers in the land of Egypt.” This philosophy can be seen as a guiding principle for community groups such as the Vancouver Holocaust Education Centre and National Council of Jewish Women (NCJW).

Founded in 1983 by local survivors of the Holocaust, the Vancouver Holocaust Centre Society for Education and Remembrance was formed with the goal of establishing an anti-racism education centre. This goal was realized in 1994 in the form of the Vancouver Holocaust Education Centre (VHEC). Education is central to the mandate of the VHEC and, each year, the centre reaches more than 25,000 students and teachers through exhibits, school programs, teaching materials and professional development initiatives for educators.

Since 1924, the Vancouver section of the NCJW of Canada has been dedicated to social action and human rights. For close to a century, its social justice efforts have taken diverse forms, from pioneering a provincial mobile hearing screening program for preschoolers to championing the cause of Nasrin Sotoudeh – illegally imprisoned in Iran – to recent fundraising and awareness initiatives against human trafficking.

These are just a few of the many organizations and individuals who make real the lessons of Passover each day. It has been inspiring to learn more about these and other people and groups as we at the Jewish Museum and Archives of British Columbia collect stories for our upcoming celebration book marking our 50th anniversary.

We invite you to share your story with us and be a part of this milestone publication. Share your family story, recognize someone notable, or sponsor this project. Full information is available at jewishmuseum.ca/fifty-years.