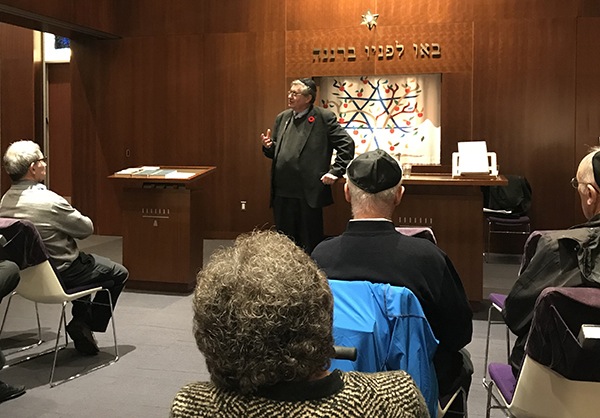 Dr. Chris Friedrichs will deliver the lecture “How to Steal from Jews: A Story from Nazi Germany and What It Teaches Us,” which will be available from Nov. 9, 7 p.m., from the Vancouver Holocaust Education Centre. The Victoria Shoah Project is also holding a commemoration, called “The Persistence of Creativity Emerging from the Shards of Tragedy.” (photo from VHEC)

On the evening of Nov. 9, both the Vancouver and Victoria Jewish communities will be holding virtual Kristallnacht commemorations. This year’s commemoration marks the 82nd anniversary of the state-sponsored Kristallnacht (Night of Broken Glass), which took place throughout Germany and Austria on the night of Nov. 9-10, 1938. In the course of just a few hours, hundreds of synagogues were burned, thousands of Jewish-owned places of business were destroyed, almost 100 Jews were killed, and 30,000 Jews were arrested and sent to concentration camps. The shards of broken window glass seen in front of Jewish-owned stores all over Germany the next morning gave the memorial event its name.

The Vancouver Holocaust Education Centre, in partnership with Congregation Beth Israel and with support from the Robert and Marilyn Krell Endowment Fund of the VHEC and funds from the Jewish Federation of Greater Vancouver annual campaign, is presenting the lecture “How to Steal from Jews: A Story from Nazi Germany and What It Teaches Us,” by keynote speaker Dr. Chris Friedrichs.

The Nazi regime not only murdered millions of Jews, it also relentlessly confiscated Jewish property from owners later sent to their deaths. The illustrated lecture by Friedrichs will describe the step-by-step process by which two elderly Jews from wartime Berlin were stripped of all their assets before they were deported to the death camps – and shows how Nazi officials then fought with one another about what to do with the stolen property.

Friedrichs is professor emeritus of history at the University of British Columbia, where he taught for 45 years before his retirement in 2018. He is a specialist in German history and has been active for many years in Holocaust awareness education.

The Vancouver event is pre-recorded and will be available for viewing any time after 7 p.m. on Nov. 9: visit vhec.org/events-gallery/#videos.

In Victoria, live-streaming via Zoom, the Victoria Shoah Project will present a program titled “The Persistence of Creativity Emerging from the Shards of Tragedy.” It is a remembrance of those who suffered on Kristallnacht and in the Shoah, as well as a reminder of how and why we, as a collective society, commemorate such tragic events. Remembrance is essential; however, we also must act in tangible ways to protect all peoples in our diverse community.

In recent years, there has been the unfortunate growth of attacks on minority groups and those who are “ the other.” This highlights the need for us to stand together to protect and safeguard all peoples, regardless of religion, race, sexual orientation or other factors, which may make them targets of a hateful few. And, in this context, the Victoria Shoah Project is inviting political and law enforcement leaders, as well as representatives from the diverse faith communities, to join together at the commemoration to lead the reading of a pledge of mutual respect and support.

It is also inviting the entire community to join the event – to remember the past and commit to take action for a better future, where we will respect and protect our neighbours, not remain silent in the face of any injustice against any person or group and work towards building bridges leading to unity and shalom (peace) in our community and beyond.