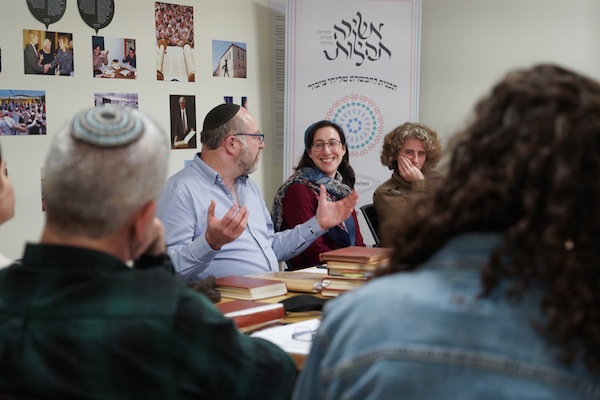 Rabbi Uri Kroizer from the Ashkenazi track with his students. (photo by Itai Nadav)

Some 50 prayer leaders recently completed the first session of the inaugural Ashira program. The program’s goal is to train prayer leaders (schlichei tzibur) from across Israel to direct creative prayers in one of the following three tracks: Ashkenazi, Sephardi and contemporary liturgy.

At one of the meetings at the Schechter campus in Jerusalem, Novis Deutsch explained, “Musical prayer is at the crux of the soul – it is clear that enabling people to study prayer touches their souls. We can discern true happiness in the classes. As the director of many programs at the Schechter Rabbinical Seminary, I can sincerely say that when you teach Torah you sometimes see happiness, but when you teach prayer you constantly see happiness on the students’ faces.”

The Ashira program is comprised of 15 weekly five-hour meetings, where students study both theoretical and practical aspects of prayers and it is sponsored by donors from Vancouver and various parts of Israel.

From December 2018 to just after Passover 2019, when you walked down the hallways of the building, you would hear different styles of music from the classrooms.

“The students represent a broad variety of Israeli communities – some are studying in rabbinical programs, some are prayer leaders, and all have a love for Jewish liturgical music,” said Novis Deutsch. “The Ashira program furthers social cohesion; it is a collaborative project with the leaders of prayer renewal in Israel. Many of those who participate in the program never thought that they could be prayer leaders. Ashira allows them to imagine this possibility – it reduces their anxiety about leading prayers and gives them a voice.

The program’s premise is that, to find your voice as a prayer leader, you must acquire an in-depth knowledge of the tools, styles and procedures in this field.

“Before we embarked on the program, we assembled 12 leaders in the field of Israeli music and started a process, which gave birth to Ashira,” explained Yair Kochav. Of the three tracks, he said the Ashkenazi and Sephardi work with the existing liturgy, teaching it to the new prayer leaders, while the “contemporary liturgy track fuses the first two tracks with modern Israeli reality.”

According to Kochav, each track is divided into three sections: theoretical, musical and practical.

“This gives students a multifaceted experience of the essence of prayer and what motivates people to pray,” said Kochav. “Each identity and motivation must receive its own space. There is a certain apprehension that the traditional liturgy will disappear due to the growth of a popular modern Israeli liturgy. Therefore, students in all three tracks meet to discuss the similarities and differences of each liturgy.”

Rabbi Rani Yager, from the Shalom Hartman Institute, who heads the contemporary liturgy track together with Yair Harel, said, “The most important lesson that I learned in this program is that prayer is a need felt by people in all communities: it is not connected to one’s religious or ethnic background, nor to one’s gender. People are willing to discuss this need, to learn and to share their feelings. Singing together requires courage, and the enormous need for prayer engendered this courage.”

Students study the musical scales of each liturgical style; each student plays an instrument and/or sings during the classes. During the breaks, students meet in the hallway and eat dinner together (organized by different students each week) and discuss current events.

“Those of us in the Ashkenazic track, who come from different backgrounds, meet weekly and make space for the voices that we bring from our homes,” said Shira Levine, who received her master’s from the Schechter Institute of Jewish Studies and is now a rabbinical student of the Hartman/Oranim program. “I have learned much from Rabbi Kroizer, who is an expert in Ashkenazic liturgy and a real mensch. I hope to study Sephardic liturgy in the next session.”

Osnat Ben Shoshan Pruz, a participant in the Sephardi track, said, “The program opened a door to a significant and immense world in which I have participated for many years. Ashira provided me with an opportunity to study, in depth, areas that I had not previously had a chance to examine. I have acquired numerous tools and knowledge in liturgy, Talmud and Jewish philosophy.”

“The program changed the manner in which I sing prayers, which goes beyond the pages of the siddur,” said David Arias, a Schechter Rabbinical Seminary student who participates in the contemporary liturgy track.