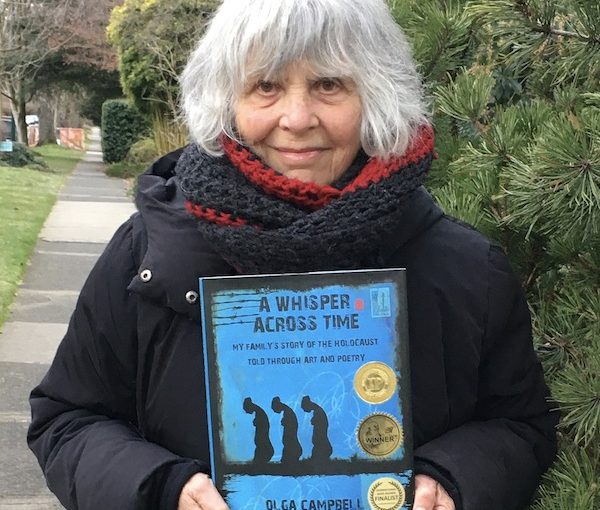 Half of all sales during March of Olga Campbell’s multiple-award-winning A Whisper Across Time: My Family’s Story of the Holocaust Told Through Art and Poetry will be donated to the Vancouver Holocaust Education Centre’s anti-racism programming, engaging youth and teachers in promoting human rights, social justice and genocide awareness. Campbell’s goal is to raise $5,000. Her objective is to raise “concerns about the fragility of democracy and the rise of white nationalism, racism and antisemitism in the world today.”

In A Whisper Across Time, Campbell – whose mother lost all of her family during the Second World War – writes, “This is the story of one family out of millions of families who went through the Holocaust.”

As quoted in the Jewish Independent when the book was published in 2019, “It is ‘the story of survival and death,’ ‘of how trauma of such magnitude is passed from one generation to another to another….’ It is also an ardent call for readers to remember Rwanda, Rohingya, Bosnia, Syria, Afghanistan, Sudan, Iraq, Cambodia.” Campbell notes in the book that, “by the end of 2016, there were 65.6 million refugees, asylum seekers and internally displaced people in the world.” She pleads, “eighty years ago, the world looked away / we must not look away now.” (Read more at jewishindependent.ca/a-story-told-in-art-and-poetry and jewishindependent.ca/whisper-across-time.)

Campbell will be giving away five signed copies of her book. Everyone who wins or buys a book before the end of March will also receive a signed miniature print – images from the book.

Winners of the book giveaway will be announced on March 21, which is the International Day for the Elimination of Racial Discrimination.

To buy the book ($32), visit olgacampbell.com/new-book-whisper-across-time.