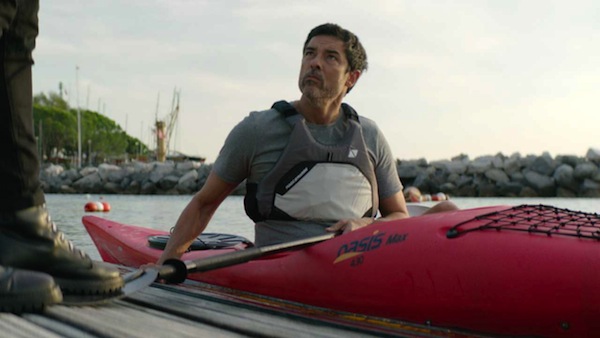 Alessandro Gassmann plays a Jewish surgeon whose idyllic kayaking trip – and life – is upended when he hears a car accident on the adjacent roadway. (photo from comingsoon.it)

The Vancouver Jewish Film Festival is finally here! Available for streaming until March 14 is a host of movies – thrillers, documentaries, dramas and comedies. We watched all of the above this past week and here’s what we thought about the handful of movies we saw.

In the Italian-set film Thou Shalt Not Kill, a Jewish surgeon’s idyllic kayaking on an Italian river is abruptly and inextricably interrupted when he hears a vehicle accident on the adjacent roadway. Coming ashore and scurrying up the embankment, Simone (Alessandro Gassmann) discovers a gravely injured man behind the wheel of a vehicle that has been involved in a hit-and-run. When the doctor, who we are to discover is the son of a Holocaust survivor, sees the swastika tattooed on the man’s chest, he confronts a fate-determining choice.

Driven by guilt or some other impetus, Simone begins a quest that entangles him into the lives of the crash victim’s family. At the same time as he is dealing with the estate of his own problematic father, the surgeon is confronted with the impacts of a different sort of intergenerational trauma.

Simone devises to hire the dead man’s daughter, Marica (Sara Serraiocco), as a cleaner and their awkward relationship evolves. Simone is drawn into their not-insignificant family dramas and he takes some steps to make amends for his lack of action at the scene of their father’s death.

Simone faces a sort of mirror image of his original moral choice when Marica’s brother Marcello is seriously wounded and, again, a despicable tattoo confronts the attending doctor. Is it his relationship with Marica that drives Simone to behave differently in this instance? Or is it a reconsidering of his earlier actions (or inactions) with their father and a chance to in some way right a wrong that leads Simone to save Marcello’s life?

Writers Davide Lisino and Mauro Mancini (the latter of whom also directed) resist some of the stereotypes common in depictions of hate-filled characters and instead allow a portrayal of even those with the most detestable ideas as ultimately human. The acting is universally good to excellent and the conclusion avoids simplistic tying up of loose ends. The complexities of every human life – including those we tend to see as uniformly malevolent – are represented, as are deeply alarming images of neo-Nazism in contemporary Italy.

Kosher Beach takes viewers into a world about which most of us know little – the lives of a group of women who live in the ultra-Orthodox city of Bnei Brak. Specifically, the documentary focuses on Sheraton Beach in Tel Aviv, or the Separate Beach, so named because it used to front the now-demolished Sheraton Hotel and is open to women and men on different days, so that they are kept separate in their enjoyment of the recreation area.

This separation is what makes it possible for the Orthodox women to go there and they rent a bus to get there from Bnei Brak, about a half-hour drive away. Most of the women swim and relax almost fully garbed, but some younger women take the opportunity to shed their layers of clothing and, some would say, their modesty – but, still, only among women (and the few male lifeguards). We learn some of the reasons the women like going there. Among other things, the beach offers a respite from their families and their troubles, to which we also are made privy.

The safe haven is threatened, however, as there are rabbis in their community who believe that the road to the beach is full of temptation. And, even though the women bus there, the beach is adjacent to – and offers a view of – the Hilton section of the waterfront, the main beach for the gay community, which is problematic for the rabbis. It is interesting to hear the women’s differing opinions on the issue, and their reactions when this freedom of theirs – to go to the beach with one another – is put at risk.

A slice-of-life dramedy that addresses the many-faceted hurdles facing a couple struggling to conceive a child, The Art of Waiting brings laughs and cringes.

Liran (Roy Assaf) and Tali (Nelly Tagar) are a couple in their mid-30s who face the reality that medical intervention will be required if they want to become pregnant.

Liran’s parents live in Sderot, the Israeli border town abutting the Gaza Strip that is subject to routine missile attacks from Hamas. A Shabbat in Sderot sends the family to the safe room, but the real bombshells are saved for the dinner table. Liran and Tali tell the family they are trying for a child, not letting everyone in on the challenges that entails. Unexpectedly, Liran’s brother and his same-sex partner make a similar announcement. (“Who’s the father?” blurts out the grandmother.)

In addition to the vagaries of kooky family members, like the fanatically vegan mother-in-law on an all-peel diet, the couple face the chaos of seemingly endless medical appointments and procedures crammed in among the obligations of two busy career professionals. The audience – and the doctor – wonder whether the couple is ready for kids when they only begrudgingly show up for the appointments necessary to hasten parenthood.

Predictably, lovemaking veers into something analogous to animal husbandry, with emphasis on the destination rather than the journey. Sex isn’t the only rote behaviour in the process. The doctor has been through it all many times and has a trademarked patter that amusingly repeats throughout the film.

It is an enchanting and often hilarious look at the difficulties couples face in such a circumstance and illustrates the toll the stresses take on a marriage. Each character is well sketched out and adds a unique and quirky contribution to the whole. The final scene is charming, if predictable.

In The Samuel Project, Eli makes his grandfather, Samuel, the subject of his animated short – a project for school – when he finds out that Samuel is a Holocaust survivor. It is a tale of reconciliation, in part, as Samuel’s son Robert is both a neglectful son, as well as a neglectful father, and he must learn the value of family. (Eli’s mother left when he was very young and Samuel is a widow.) It is also a story about following your strengths and believing in yourself, as Eli’s desire to become an artist is met with derision by his father and grandfather.

The acting by the two leads – Ryan Ochoa as Eli and Hal Linden as Samuel – is a pleasure to watch and there are tender moments between the butcher, an Armenian named Vartan (Ken Davitian), and Samuel, who owns a dry-cleaner. The two men have a running chess game and Vartan brings Samuel some prize meat whenever he picks up his newly cleaned aprons.

While the movie starts strong, The Samuel Project ends with the feeling of an afterschool special. Samuel’s easy telling of his Holocaust experience lacks believability, as does the one-dimensional and undeveloped character of Robert (Michael B. Silver). The character of Eli’s schoolmate and project partner, Vartan’s son Kasim (Mateo Arias), is also lacking in development, but does provide some amusing moments. Eli’s artwork and final project are wonderful.

Love against the odds

The romantic comedy Kiss Me Kosher (aka Kiss Me Before It Blows Up) is the perfect example of why one should be skeptical of reviews. Read them, but then see what you want to see, regardless, because it would have been a shame to have missed out on this thoroughly enjoyable rom-com, which somehow had a rating of 4.9 out of 10 on imdb.com. At press time, it had risen to 5.1, but still not great, and there weren’t any easily findable articles on it in English. (It’s a German film that takes place in Israel, so there may be some reviews in German or Hebrew. For that matter, there may also be some in Arabic, as that language also makes an appearance.)

Kiss Me Kosher encompasses two love stories and a host of complex politics that are lightly touched upon; raising ideas rather than dwelling on them, leaving viewers to decide for themselves, or to question their reactions to various scenes later. The main romance is between Maria (Luise Wolfram), a German non-Jew, and Shira (Moran Rosenblatt), an Israeli granddaughter of a Holocaust survivor. For Shira and her family, there is some discomfort that Maria doesn’t know what her grandparents did during the war. But, for Shira, it is not a deal breaker, and she accepts Maria’s marriage proposal, despite it being only three months into their relationship. For Shira’s survivor grandmother, Berta (Rivka Michaeli), however, it is simply not acceptable for Shira to marry a German and Berta’s harsh and alienating reaction is as understandable as it is hard to watch.

But Berta herself is also in a difficult and publicly unacceptable situation – she’s in love with a Palestinian man, a fellow widower. But Berta knows how most people would react to the relationship. And one of those people is Shira’s dad, an American who made their home in one of the settlements not only because it was more affordable, but because of his politics.

It’s hard enough for all concerned, as Shira and Maria work through misunderstandings, jealousies and Shira’s family dynamics, including her sister, who’s keen to plan Shira’s big wedding that Shira doesn’t want, and brother, who’s filming everything for a school project. So things come to a boil when Maria’s parents fly in from Germany to meet Shira and her family. Revelations, new understandings and some silliness follow. It’s a well-acted, fun movie that makes you think. It deserves a relatively high rating, 7.5 or even an 8 out of 10, which hopefully it’ll receive as more people see it.

For tickets to the film festival, visit vjff.org.