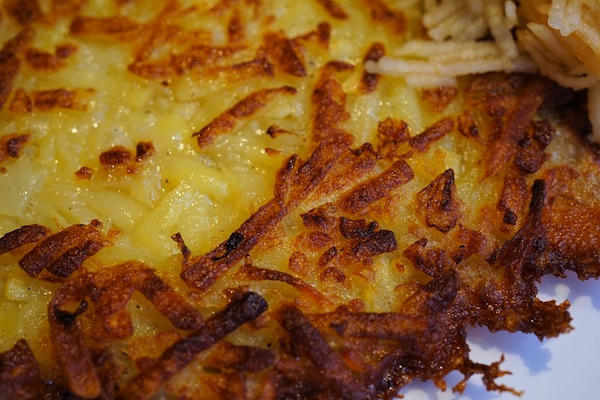 With all the oil used for frying Chanukah potato pancakes – otherwise known as latkes, in what we think is Yiddish, or as levivot in Hebrew – they may be considered an unhealthy food. Yet, each Chanukah, many of us, who are staunch-hearted and old-fashioned, spend time grating potatoes by hand, always accidentally suffering at least one scraped finger. The more modern among us risk coming out with liquid mush by using a food processor or blender.

Why do we keep making these little pancakes year after year? Why do we eat them for Chanukah in the first place? An old folk proverb says: “Chanukah latkes teach us that one cannot live by miracles alone.”

Jewish food writer and cookbook author Joan Nathan contends that the word latke is not in fact Yiddish but rather stems from “a Russian word, latka, and a pastry, from obsolete Russian, oladka, or flat cake of leavened wheat dough.” This, in turn, probably came from a Middle Greek word, eladion, or oil cake, stemming from elaion, meaning olive oil.

Potato pancakes seem to have originated among poor Eastern European Jews, but potatoes did not become a staple until the mid-19th century. John Cooper, in Eat and Be Satisfied: A Social History of Jewish Food, comments that Jews from Lithuania ate pancakes made from potato flour for Chanukah and had borrowed the idea from Ukrainians, who made a potato pancake dish with goose fat called kartoflani platske, which they ate for Christmas. Since Chanukah fell about the same time, and there were plenty of geese to provide goose fat or schmaltz, we could conclude that schmaltz became a substitute for oil. Jews living in the Pale of Settlement in the 17th century probably adapted it for Chanukah as a way to dress potatoes differently for the holiday. Cooper also states that many Eastern European Jews ate buckwheat latkes for Chanukah, while Polish Jews made placki, pancakes, from potato flour and fried them in oil.

Here are a few types of latkes that would be nice to serve during Chanukah.

TUNA LATKES
This recipe came from Starkist Tuna, with adaptations. It makes 16 latkes.

HERBED ZUCCHINI FETA LATKES
With a few changes, this recipe is from Food & Wine and is by Didem Senol, a chef from Istanbul, Turkey, who trained at the New York French Culinary Institute. It makes four to six servings.