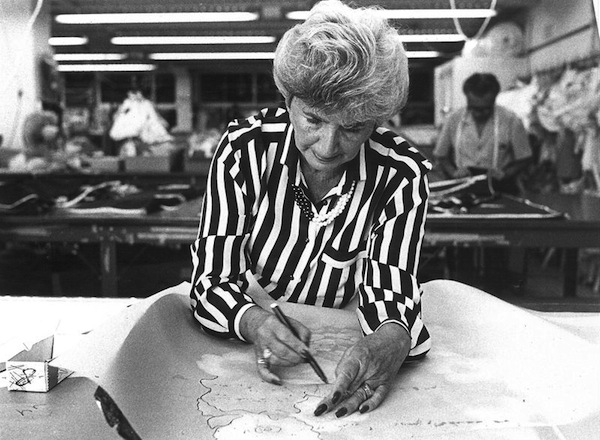 Summertime … bathing suit season. As a child, I fondly remember our family trips to Israel. Among all the memories is the treat of a scrumptious falafel before we went off to the Gottex bathing suit factory, where my mother indulged my two sisters and me with the colours and styles from Lea Gottlieb’s latest swimwear collection.

Born Lenke Lea Roth on Sept. 17, 1918, in Sajószentpéter, Hungary, Gottlieb was raised in poverty. Before the Second World War, she worked as a bookkeeper in a company that produced raincoats. There, she fell in love with Armin Gottlieb, the owner’s son; the two married and started a family.

During the Holocaust, Gottlieb’s husband was imprisoned in a labour camp. Gottlieb and their young daughters, Miriam and Judith, went into hiding and were saved by a family who sheltered them in a pit behind their home beneath trees and flowers.

After the war, the family reunited and tried to rebuild what they had established in the past, moving to Czechoslovakia to start anew. However, staying in Europe, with its continuing antisemitism proved impossible for the Gottliebs and, in 1949, they moved to Israel.

They landed in the country with pretty much nothing but the clothes on their backs and Gottlieb’s gold wedding band. Turning this item into cash, as well as borrowing some money, she purchased a sewing machine and enough fabric to start making raincoats. It didn’t take long for Gottlieb to understand that a line of raincoats in a place that has mostly sunshine would not make for a fruitful future – rather, bathing suits would prove a more promising venture. Merging her name, Gottlieb, with the word textile, Gottex came into being.

Gottlieb’s Hungarian cultural roots remained evident. She maintained her distinct accent and served Hungarian cuisine in her showrooms. She celebrated her survival by incorporating flower motifs into her signature designs, and, with her choice of colours, she expressed her love of her new home, Israel – aqua for the Mediterranean, yellow for the dessert, pink for Jerusalem stone and greens, the Galilee. From swimwear came a line of trousers, caftans and tunics, as Gottlieb wanted her creations to be worn at the beach or by the poolside, for a drink at the bar and on the dance floor.

During the peak of Gottlieb’s career, her work was admired by many leading ladies. Elizabeth Taylor, Princess Grace, Nancy Kissinger and Brooke Shields were among her many fans. A friendship formed with one special client, the late Princess Diana, who was given private showings in Buckingham Palace each season.

Gottlieb and her daughter Judith were the design team, based in Israel, while her husband oversaw the financial side and daughter Miriam ran the showroom in New York. Together, the family built a global fashion house and Gottex became the top swimsuit line in the United States, with the most sought-after models walking in their shows and being featured on the cover pages of international fashion magazines.

Gottlieb’s achievements included numerous fashion awards, earned both in Israel and elsewhere. A highlight of her career occurred at Yad Vashem, the World Holocaust Remembrance Centre, in Israel. There, Gottlieb was part of an honourary exhibition, called My Homeland, which acknowledged Holocaust survivors’ essential role in contributing to Israel through cultural, economic and national security development.

In 1995, the loss of Gottlieb’s husband, the financial pillar of the company, was a devastating blow. She was forced to sell Gottex in 1997. As part of the sale, she had to sign a non-compete agreement, which prohibited her from designing for eight years. And more loss was to come. In her daughter Judith’s final days of battling cancer, in 2003, she apparently implored her mother to continue with her passion of design and start again. But, even when the company did come up for sale, Gottlieb couldn’t afford to buy it back. “I lost the two most important things in my life, my daughter Judith and my life’s work,” said Gottlieb after her daughter’s death.

But, at 85 years old, Gottlieb managed to reinvent her career. With the support of a design team, she launched a new line of swimwear under her own label, Lea Gottlieb. The industry had become much more competitive since she created Gottex and, relatively soon after she had restarted, Gottlieb closed production and retired.

Gottlieb passed away in 2012, at the age of 94. She left behind a legacy in her beloved homeland, as well as in the eyes of veteran and aspiring designers around the world.