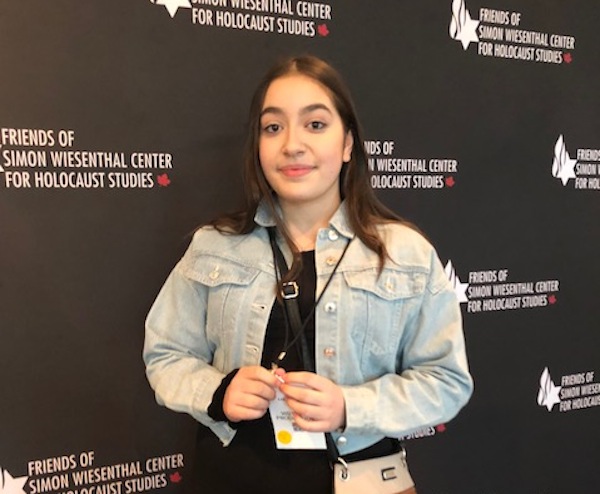 Every year, the Friends of Simon Wiesenthal Centre for Holocaust Studies puts out a call to Ontario students in grades 6 to 8 to submit a speech reflecting on a quote of Holocaust survivor Simon Wiesenthal, z”l. This year, the quote selected was, “I believe in the good in people,” and students were encouraged to think about how to make the world a better place.

Deema Abdel Hafeez, a Grade 8 student at Janet Lee Elementary School in Hamilton, Ont., entered the contest, the first round of which was in February. Hafeez comes from a Palestinian family who moved to Canada 20 years ago.

“I wrote about my Islamophobic experiences. I was saying that you have to define the word ‘good’ to believe in the good in people. And, you have to become the good yourself before you can assume the good in other people.”

Hafeez shared that, while her school is pluralistic, with students of many different faiths, racism still very much exists.

“All the racist slurs and things like that, that’s how I attacked the quote,” said Hafeez. “I talked about how my family can’t go out without [experiencing it] … how my mom is being told to go back to her own country, or how anyone wearing religious clothing … is attacked in social standing … and how things are at a disadvantage for people like us. Obviously, it’s not as bad as it used to be, but, as a world, we need to try to change more.”

Hafeez said one of her Muslim neighbours had been badly beaten, to the point that he had almost died, just because he is a Muslim.

In the classroom, Hafeez has witnessed hate. “People mention jokes on social media and like things like that, and they talk about different colours of skin as if following a stereotype… and it’s, like, you’re funny, but you’re not … it’s just rude.”

When asked about how her parents felt about her entering the competition, Hafeez said she had entered without their knowledge. “It wasn’t because they wouldn’t have allowed me to,” she said. “But, I kind of just entered without telling anyone. At home, we talk about the Palestine-Israel conflict a lot, because we have a lot of family in Palestine. We can’t hate a whole group of people, because that’s hypocritical and we’re nice people … so, we don’t hate Israeli people. I have a lot of Israeli friends and I’m Palestinian. It’s cool, because, I feel like, with the Palestinian-Israeli conflict, there’s a way we can live in harmony, both nations living in the same land.”

Hafeez is a member of the school group Making a Difference.

“We do a lot of fundraisers and things like that,” she said. “I volunteer my time while making projects for my school and having the whole school getting involved in these projects. That’s how … I think I’ve become ‘the good,’ in my opinion. I find good as not seeing other people as objects and not labeling them and things like that … becoming the good is more mental to me. You can’t judge anyone. You can’t say, this person is good or bad. You can define yourself and, if you believe you’re doing the best you can at being good … if everyone did that in the world, then we’d live in a better place.”

Hafeez said she watches the news a lot and feels there is far too much violence that results from people judging others.

“I’m not talking about politics,” she said. “If everyone just stopped judging other people based on their religion, colour, sexual orientation … if everyone just focused on themselves, then our world wouldn’t be as hateful a place as it is right now.”

Hafeez practised her speech with her eight siblings.

“I feel like the hardest part for me was just managing my time and how I was supposed to practise my speech, and do all the things for my speech while I also have school, sports, classes … that was the hardest part,” said Hafeez. “The speech itself came easy for me. It is my own thoughts and is everything I’d thought about before. I stayed up late at night thinking these thoughts. I already knew what I wanted to say, so, on the stage, I wouldn’t be reading off a paper. I’d be talking about what I’ve been thinking about.”

The practise paid off. Hafeez was among 10 students chosen to attend a workshop and have their speeches taped as part of the semifinals on March 3 at the Friends of Simon Wiesenthal Centre in North York, a suburb of Toronto. A panel of judges then selected five students for the finals on March 28 at the Toronto Centre for the Arts. Hafeez placed third, winning an iPad.

Hafeez and her school have sent the Simon Wiesenthal Centre a grant application in the hope of organizing a peace summit, incorporating some anti-Islamophobic and anti-discrimination workshops for area schools.

Hafeez is already thinking about what types of activities she would like to undertake in high school, next year, such as starting up a group for change.

“I feel like, when I do that, I’ll be introduced to everything else I can do at my high school,” she said. “I have a lot of siblings, know a lot of teachers. I feel like it won’t be hard, to use my voice to reach people in high school.”

Meanwhile, Hafeez will find good use for her new iPad.