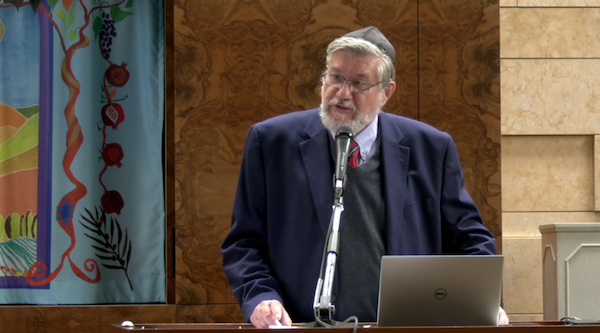 Under the Nazi regime, almost all personal property and wealth owned by German Jews was either explicitly confiscated or, in the case of bank accounts, effectively frozen. Yet, while Jewish property was stolen without compunction, the Reich had scrupulous records and systems in place to ensure that no Aryan German who was owed money by those Jews was deprived of their due.

Chris Friedrichs, professor emeritus of history at the University of British Columbia and himself the son of a couple who fled Germany ahead of the Holocaust, delivered the lecture at the 2020 annual Kristallnacht Community Commemoration, Nov. 9. The event was recorded and presented virtually due to the pandemic. His lecture, How to Steal from Jews: A Story from Nazi Germany and What it Teaches Us, explored the history of the family of Friedrichs’ late wife, Rhoda (Lange) Friedrichs, as a microcosm of the sprawling bureaucracy the Reich put in place to manage the stolen property.

Rhoda Friedrichs’ grandparents, Carl and Thekla Rosenberg, lived comfortably in Berlin. Their two daughters grew up and migrated to the United States. By the time the Nazis came to power and the Rosenbergs might have been able to escape, Carl was already experiencing dementia.

Because there was no room in the Jewish nursing home in Berlin, he was moved to a facility in Koblenz, hundreds of kilometres away. Thekla was forced from their home and ordered into a sort of dormitory for older Jews, where she shared a single room with five or more other Jewish women. From there, she was assigned to forced labour in a factory.

Eventually, consistent with the plan for the “Final Solution,” almost all the Jews remaining in Germany were transported to Nazi-occupied Poland.

“Every time a Jew was put on a list to be deported to the east, he or she first had to fill out what was called a property declaration, a complete list of all his or her property, which would now become the property of the German Reich,” said Friedrichs.

In the spring of 1942, Carl Rosenberg and the other residents of the Koblenz care home were deported to a death camp in Poland.

In November 1942, Thekla and 997 other Berlin Jews were transferred to a train station and deported directly to Auschwitz.

“Who suffered most on these trains to Poland?” Friedrichs wondered. “Was it Carl Rosenberg, his mind clouded by confusion and dementia, suddenly removed from the caring place where he had lived for two years and put on a train for reasons no one could explain to him? Or was it his wife, her mind clear to the last, not knowing the exact destination but almost certainly able to guess what lay ahead for her? This, like much else, we will never know. But we do know that both of their lives ended in unspeakable misery in 1942.”

Their lives ended, Friedrichs noted, “but their victimization did not.”

The German Reich claimed to own whatever property the Rosenbergs still had at the time of their deportation. Like that of the other German Jews who were deported, the assets came under the authority of German finance offices in cities and towns across the country.

“One might think that this was an uncomplicated matter,” said Friedrichs. “Well, no. There was a problem. If a Jew owned a house or a piece of land, there might be a mortgage on it. The mortgage-holder might be a German, who expected his regular interest payments. If a Jew had any debts or obligations, they might be owed to some German, who expected those debts to be honoured and paid. If a Jew still owed some rent or had not yet paid the last gas bill or electric bill before being taken to the station, the landlord or utility company waited impatiently for that payment. You could steal every penny from a Jew, but you still had to be careful not to deprive even a single penny from a German who was entitled to it. So, all the local offices of the ministry of finance had to handle all these matters with scrupulous bureaucratic precision. Otherwise, they might be accused of cheating Germans of what was due to them.”

In files Friedrichs has copies of, the respective finance offices in Berlin and Koblenz had extensive back-and-forths about which office was responsible for settling outstanding obligations from the Rosenbergs’ estates.

The documentation of the officials was meticulous, something Friedrichs credits more to the nature of bureaucrats than to the Nazis specifically.

“Most of the thousands of people who worked for the German ministry of finance or the local finance offices were not hard-core Nazis,” he said. “The majority of them had been working in those offices for many years, usually starting long before the Nazis came to power.… As long as it was clear which ordinances or decrees were pertinent to the work at hand, they carried on as usual.”

Historians have found several instances of officials defying orders and returning stolen property to their Jewish owners, but this was exceedingly rare, said Friedrichs. “Did they ever wonder if they were in fact facilitating or cooperating with a process of mass murder?” he asked.

As the Nazis’ defeat approached, high-ranking officials circulated an order to the local finance offices in Germany, demanding that all records pertaining to the disposition of Jewish property be destroyed rather than fall into the hands of the invading Allied armies.

Again, behaving more like bureaucrats than Nazis, few offices complied. “The work of the finance offices would be carried on right to the bitter end,” said Friedrichs. “This is how bureaucrats reacted when they were taught what to do but not to think about why they were doing it.”

The care the German officials took with Jewish property juxtaposes bleakly with the fate of the Jewish people themselves.

“It teaches us something not just about the fate of two of the victims, but also about those who participated in the victimization,” said Friedrichs. “The Holocaust, in its fullest sense, was not only the murder of Jews. It was also a relentless project to take whatever the Jews had and make it the property of the German Reich or in some cases of their accomplices in other parts of Europe. After all, the Nazis valued everything the Jews owned, everything, that is, except their lives, which the Nazis regarded as worthless.”

Friedrichs’ lecture dovetailed with the theme of the exhibition currently ongoing at the Vancouver Holocaust Education Centre. Treasured Belongings: The Hahn Family & the Search for a Stolen Legacy tells the history of Max and Getrud Hahn, whose collection of Judaica and other artwork was stolen by the Nazis, and the efforts by their descendants, including their grandson Michael Hayden, a UBC professor, to locate and restitute some of the artifacts.

Friedrichs’ talk paid tribute not only to his wife’s grandparents, Thekla and Carl Rosenberg, but also to his wife Rhoda, who, he said, had hoped to pursue the research on this aspect of history and share it with the public herself, but who passed away due to cancer in 2014.

The lecture was presented by the VHEC and Congregation Beth Israel. It was made possible with support from the Robert and Marilyn Krell Endowment Fund at the VHEC and contributions to the Jewish Federation of Greater Vancouver annual campaign.

Beth Israel’s Rabbi Jonathan Infeld thanked Friedrichs and reflected on his words and their meaning. Nina Krieger, executive director of the VHEC, read a proclamation from the City of Vancouver on behalf of Mayor Kennedy Stewart.

Corrine Zimmerman, president of the board of directors of the VHEC, introduced the event, which took place on the 82nd anniversary of Kristallnacht, Nov. 9-10, 1938. That date is seen by many as the beginning in earnest of the Holocaust. The well-orchestrated pogrom, planned to appear like a spontaneous anti-Jewish uprising, saw violence across Germany and Austria that night. Rioters destroyed 267 synagogues, damaged or destroyed 7,000 Jewish businesses and 30,000 Jewish men were arrested and incarcerated.

Candles of remembrance were lit by Holocaust survivors in their homes and incorporated via video into the commemorative program. Cantor Yaacov Orzech chanted El Moleh Rachamim.