When Leonard Nimoy announced in 1949 that he wanted to be an actor, and was leaving Boston for Hollywood, his Russian-Jewish parents were stunned.

“My grandfather said that he should take up the accordion,” said Adam Nimoy, Leonard’s son and the director of the new documentary For the Love of Spock. “You could always make money with the accordion. Those were Max Nimoy’s words of wisdom to my dad, if the actor thing didn’t work out.”

He needn’t have worried. Not because Leonard Nimoy eventually made it after 15 years of bit parts in movies and TV shows, thanks to Star Trek. Or because his talent and curiosity propelled him into singing, photography, poetry and film directing. Nimoy had a deeply ingrained work ethic, independent of the arts, that perpetually drove him. From folding chairs at the Boston Pops and selling vacuum cleaners in his hometown to installing aquariums in Los Angeles, Nimoy was determined to support himself and his family. But his ambitions assuredly lay elsewhere.

“He had a tremendous hunger to achieve, which was the dream of his parents coming over here, to achieve something in American society,” explained his son. “This is why he was so able to relate to Spock. My dad felt like an outsider, of a minority, of an immigrant background in a very defined neighborhood of Boston with other immigrants, and with a desire to assimilate himself into the greater culture.”

Nimoy, who died last year at the age of 83, is front and centre in For the Love of Spock.

The public often conflates an actor with a role. The documentary is wilfully guilty of that, too, delving into Nimoy’s personal life only so far as it relates to Spock or to Adam’s relationship with his dad. But it does include the story of how Nimoy took a childhood memory of seeing elders in synagogue making the “shin” gesture and adopted it as a Vulcan greeting.

“He was very connected to his Jewish roots and very proud of his Jewish roots,” Adam Nimoy said during a recent interview. “He repeated the story of the Spock salute hundreds of times, literally, with great pride about where he got it – that Spock is an embodiment of some of Judaism.”

He added, “It’s become a universal symbol. My dad, through Spock, has spread this tradition of Judaism to the world. The magnitude of that fact alone, that so many people all over the planet salute my father with a ‘shin,’ is just mind-boggling to me.”

Of course, not everything Leonard Nimoy did endeared him to his son. Driven to make the most of what might be a short-lived gig on Star Trek – NBC canceled the show after three seasons, in fact, although it found greater success in syndication – Nimoy accepted every personal appearance he was offered.

“It took a toll on us, we had challenges we had to deal with, without him around, without his involvement in the family,” said his son. “His career was number one. This is what caused a lot of friction between the two of us because I just didn’t feel like I had that much of his attention early on. He had a great love and respect for the fans, but trying to get him to look at me was very challenging for me.”

Alas, that experience continued beyond Adam’s adolescence. He was at University of California Berkeley in the late 1970s, on his own path to getting a law degree, when his father made a stop at Wheeler Hall on a college speaking tour.

“I waited for him to finish,” Adam recalled with a painful clarity. “I thought we were going to go to dinner together. He came up the aisle, signed some autographs and came up to me and said, ‘I have to catch a plane. I got another commitment I got to make tomorrow in Los Angeles, and I’m leaving.’

“I was devastated. ‘What am I, borsht?’ It wasn’t until later in his life that it was less about Leonard and his career and more about ‘what’s going on with my kids and my grandchildren.’”

Adam and Leonard were estranged for a stretch, exacerbated by the actor’s drinking and his son’s drug use. When asked if it was difficult to forgive his father, though, he doesn’t hesitate: “No, because I’m in 12-Step, and that’s a huge part of what 12-Step’s all about.”

Resentments and setbacks play only a passing role in For the Love of Spock, which is an unabashed tribute to Leonard Nimoy’s contributions as an actor and a man to a character who was and is widely embraced for embodying intelligence, science, fairness and integrity. (And for being different, of course, and living on the margins of mainstream society.)

The film omits the elder Nimoy’s record as a major benefactor of Jewish causes: the Israel Philharmonic Orchestra, a childhood centre at Temple Israel of Hollywood and the career counseling centre at Beit T’Shuvah, a Jewish recovery house.

It also leaves out the degree to which the actor passed down his pride and love of being Jewish.

“I would say that I am more religious than my father was,” said Adam. “I like to study Torah, I like to go to services on a regular basis on Friday night. Particularly the weekly Torah study has been very meaningful to me over the past couple of years. It’s just mind-boggling to me about the divine inspiration of the written word and how it always applies to something going on in my life. This is what enriches my life, and brings new meaning to my life.” 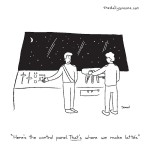