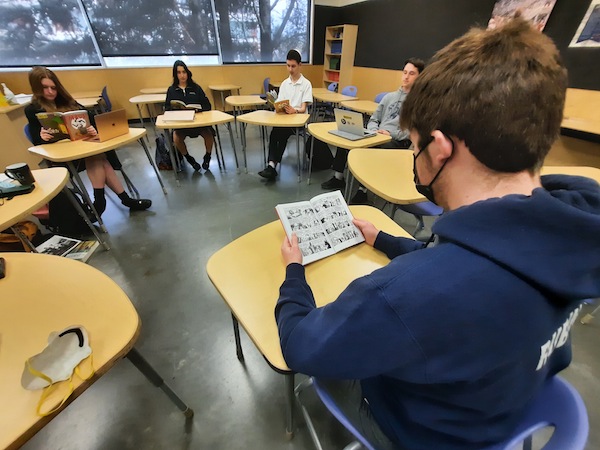 In January, the school board in McMinn County, Tenn., voted to remove the graphic novel Maus from its eighth grade curriculum.

The book by Art Spiegelman won a Pulitzer Prize in 1992 under a special category created specifically for Maus. The two-volume collection of previously serialized comic-style narratives was viewed at the time as revolutionary for its approach to a subject like the Holocaust in a medium more commonly associated with superheroes and humour.

In the books, racial and national identities are represented through anthropomorphized animals. Jews are depicted as mice, Germans as cats, Poles as pigs, Americans as dogs, British as fish and so on. In each instance, the characters have the bodies of humans and the heads of the respective animals. This form has been criticized by some critics over the decades as overly simplistic but has caused particular discomfort to many Poles, who do not appreciate being depicted as pigs.

Spiegelman, the author, called the McMinn County decision “Orwellian,” but has seen sales of his books skyrocket since the ban thrust the works back into the spotlight.

The Independent joined in a class discussion with the five students in the Holocaust and Genocide Studies course at King David High School, led by teacher Anna-Mae Wiesenthal. Discussing the Tennessee book banning, students questioned the sincerity of the school board’s grounds for opposing the book.

In a graphic memoir dealing with the attempted annihilation of a people and which touches on history’s most horrific acts of inhumanity, students found it “absurd” that the board’s primary concerns appeared to be a couple of instances of mild profanity and the depiction of a nude cartoon cat.

The book follows the true journey of the author in pressing his father, Vladek, to share his Holocaust experiences openly for the first time.

Nitzan Berger, a great-granddaughter of a Holocaust survivor, observed that many survivors hesitated to share their narratives and that the graphic novels capture the challenges of the younger generation in approaching the subject, as well as the reticence on the part of the older generation to relive the horrors of their past. While the passing down of these stories is important, it can be painful for both generations.

“It’s interesting for us to hear about the stories, but we don’t think about the other side,” she said.

Ethan Dreyshner was struck by the speed with which an entire society, down to its youngest members, could be transformed.

“It just really shows how this whole society was changed to think the Jews were terrible people,” he said. “Six years earlier, Jews were regular citizens. It’s crazy to think that a whole society, a whole population, can just turn on their neighbours that quickly.”

Noting that young people need to begin learning about this challenging subject at some point, students contrasted Maus with Anne Frank’s diary, which for generations has been an entry point to discussion of the topic.

Olivia Levsky said a graphic novel that is intense but not particularly long may be a good starting point as well, especially for young people who rebel against assigned readings.

Levsky also noted that Spiegelman, in some respects, depicted the national groups through the eyes of the victimizer.

“He drew each character and each race in the way that the Nazis saw them,” she said, noting particularly the Nazis’ association of Jews with vermin. “I imagine toward the end [of the war], the Americans felt like threatening dogs to the Nazis.” 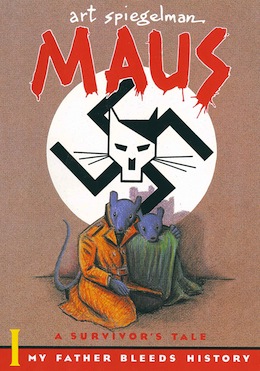 Students concurred with Wiesenthal that there also may have been a practical purpose to depicting each group as a type of animal. It made each character’s identity more immediately understandable to the reader without having to repeatedly point out the race or nationality of each individual – in one instance, a Jew (mouse) hides in plain sight with the mask of a pig (Pole).

Wiesenthal noted that the second volume, which the class has not read together, is somewhat more explicit in its violence.

The teacher also stressed that the book tells the story of the Holocaust experience and intergenerational trauma through one family.

“We often talk about numbers – six million – which can serve to depersonalize what is really an impossible number to grasp,” the teacher said. “I think that we need to remember each of them had a name, each of them had a family. It’s very impersonal, often, the way we attach the number to the Holocaust.”

Maus includes situations in which non-Jewish people assisted in the survival of Jews. While it is not addressed in the book, students discussed the fact that Yad Vashem’s criteria for designation as Righteous Among the Nations excludes people who received compensation for their often-life-endangering efforts.

Shai Rubin noted that, in some cases, Jews may have given valuables voluntarily as gratitude to their rescuers. He also noted that, in addition to risking their lives, many non-Jewish helpers were experiencing economic destitution due to the war and what small amount of food they could provide to Jews in hiding may have come at a great price to their own families.

Of one woman in the story, Rubin said: “There’s a difference between doing something for money and doing something and getting money for it. She did it out of the goodness of her heart.”

In what was a shocking sequence for students, Art, the author, discovers that his father has burned the diaries of Art’s mother, Anja, who committed suicide. In response, the son lashes out at his father: “Murderer!”

This opened a discussion of what Wiesenthal called “the murder of memory” and raised the quote by Elie Wiesel (not mentioned explicitly in the book), who said of the Holocaust and its victims, “If we forget, the dead will be killed a second time.”

The Grade 12 students analyzed the content, style and medium of Maus. They observed that, often when the wrought iron gate to Auschwitz is pictured, the focus is on the words themselves, Arbeit Macht Frei, while, in this book, the eye is drawn to the individual people in the frame, a reminder that the Holocaust can often be depicted in broad strokes but it is, ultimately, about the killing of individuals.

On the medium itself, all the students concurred that it is an effective avenue for conveying challenging material.

“I think this is a really effective form of teaching the Holocaust, especially to kids,” said Dreyshner. “Something like the diary of Anne Frank, you might feel a little disconnected, you can’t see it, you can’t understand it because it’s hard to show actual images of the Holocaust to children. I think a graphic novel really does the job because you can see what happened, you can get a sense of what happened, without seeing the horrific things exactly.”

Richard Helper agreed, but subtly criticized those who are concerned about the graphic nature of the book.

“This is easily digestible, it’s effective, it has quite a bit of information on the specifics of the Nazis’ war machine as well,” he said. “While some people, I think, try and attack it for being either too simplistic or too graphic, we’re teaching a book on the Holocaust.… It’s the Holocaust.”

Wiesenthal, who has a master’s in Holocaust and genocide studies and is pursuing a PhD in the same field, pioneered the course three years ago. Until then, the Holocaust was dealt with as part of the larger Jewish history curriculum.

“It’s important to contextualize it,” she said.