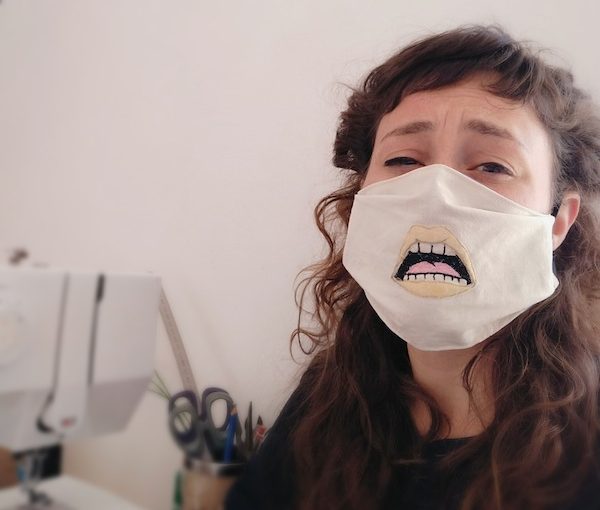 A Stitches by Orli mask, modeled by the designer Orli Fields.

A little over a year ago, Israeli radio news reported that Dr. Li Wenliang, an eye doctor in Wuhan, China, had tried to warn people that there were too many sick in his region. The report caught my attention because it stated that the doctor had been silenced by Chinese authorities.

When the coronavirus outbreak first became newsworthy, Israelis – from the prime minister on down – were sure we wouldn’t be seriously encumbered by it. We were in the mood to confidently assist others. I remember a man in front of me at the grocery checkout, turning around to ask if I knew why he was buying so many packages of toilet paper. When I said no, he told me he was sending toilet paper to family and friends in the United Kingdom.

In an unexpected turn of events, however, the virus became not just a key topic of discussion, but the manager of our daily lives. Over the long months of 2020, family visits and events were severely curtailed. In Israel, for religious and non-religious alike, Jewish holidays are always occasions for get-togethers, but not so this past year.

Some friends and acquaintances have become so nervous about catching the virus, they no longer want to converse, even outdoors, at a safe distance and from behind a mask. Fearing the spread of the pandemic, government officials, in turn, have put the kibosh on live cultural events.

Many people have learned to work from home and some have managed to re-create themselves, opening new businesses, such as those involving logistics, shipping and delivery. For example, a tour guide who used to lead groups through the colourful Mahane Yehuda Market now prepares and delivers baskets of shuk food items. Notably, during the pandemic, some lucky artists and galleries have found more of a demand for their work. Possibly this is due to the fact that people are home so much, staring at the walls, as it were. Yet, most artists-musicians, singers, actors and all the crews that keep theatres and other cultural facilities running have found themselves without work and without significant governmental bailout grants. All tolled, thousands of people have been laid off or have become unemployed altogether.

Whether because we were in lockdown or because we were anxious about being in situations where we might be exposed to people who have the virus, we have perfected online shopping to the level of an art. But some of us have also taken advantage of the farmers who are selling their produce directly to clients rather than through the now-quiet public markets.

We have learned to see ourselves as others see us, that is, in tiny boxes on Zoom. Some cultural institutions – such as the National Library of Israel, the Zionist Confederation House, Beit Avi Chai, Yad Izhak Ben-Zvi and others – have been broadcasting lectures and even some festivals on Zoom. I know one lecturer whose delivery has actually improved over Zoom.

Not only have we learned that we can talk and be understood with a mask over our nose and mouth, I have heard that there are people who, being self-conscious of their teeth and mouth, are now more confident in public because they are wearing a mask.

And masks have changed over the course of the pandemic. In Tel Aviv especially, you will see people wearing designer masks, even while most of us are dressing more simply. In my neighbourhood, for instance, the vast majority of people wear sweatpants and sweatshirts (called “training” in Hebrew) on a daily basis. Teenagers wear indoor-outdoor pajamas; sometimes, they venture outside in their slippers.

The pandemic has brought out lots of dark humour, something Israelis have always been good at. And people have become more cynical about government proclamations. As but one example, the “last lockdown we will have” has happened four times already.

The coronavirus has aided in dividing Israel even more, as certain segments of the population are singled out for their non-adherence to government policy, but are not held accountable for their non-compliance. As one doctor candidly told me, “healthcare decisions are hampered by political considerations.”

Until this pandemic, many discharged Israeli soldiers would travel to southern Asia or to South America to “clear their heads.” With the spread of corona, however, travel has no longer been a safe option, so, in the past year, some soldiers who finished their compulsory service decided to immediately enrol in colleges and universities.

Altogether, the pandemic has caused tremendous financial and emotional stress. We have learned that corona is the loneliest hospitalization and death. But government budget problems have left social service agencies and nonprofits with little or no funding to continue their work of easing the tension, so the psychological damage continues to spread, untreated.

On the brighter side, people have picked up new hobbies, such as gardening or building terrariums. Baking has become a big thing, too. Working on jigsaw puzzles is another activity going through a revival. There seems to be more appreciation of nature, as well, as people have been going out for walks or picnics near their homes as a way to cope. And there has been a significant rise in the number of people adopting dogs, which may help reduce or prevent stress disorders during the pandemic. (While the number of abandoned pets has not dropped in Israel, it has not increased.)

It is generally acknowledged that doctors, nurses and other hospital staff are on the frontlines of the pandemic, so they were the first to receive coronavirus vaccinations. However, there is no shortage of vaccines in Israel and two things happened just recently: “pop-up” inoculation stations opened, to accommodate both citizens and non-citizens, so that, basically, anyone who walks in with an ID can get one; and Israel’s prime minister began talking about vaccine diplomacy – selling or giving vaccines to other countries.

The few pluses of 2020 notwithstanding, however, I doubt most Israelis, if not all, would object to having skipped the past year.