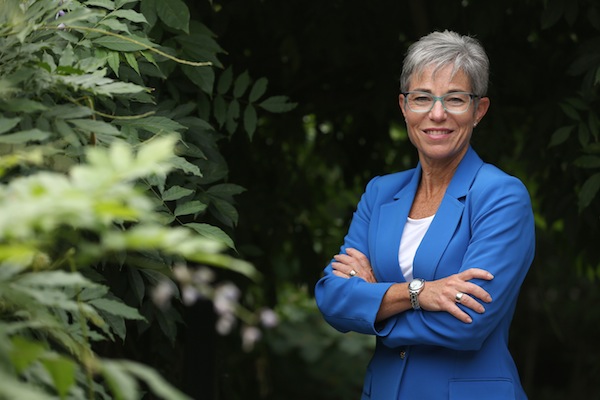 Robinson, the NDP government’s minister of municipal affairs and housing, is seeking reelection in the riding of Coquitlam-Maillardville. She sees herself as the Jewish maven around the cabinet table.

“I said yes, who called you a mensch?” Robinson recalled. “He just wanted to double-check.”

As she and other New Democrats campaign toward the Oct. 24 provincial election, Robinson and fellow cabinet member George Heyman spoke with the Jewish Independent. (In this issue, we also speak with Jewish candidates and spokespeople for other parties.)

As minister of housing, Robinson takes pride in the development of a major initiative called Homes for B.C.: A 30-Point Plan for Housing Affordability in British Columbia. Her ministry engaged with housing groups, renters, developers, economists, local government officials, planners and other thinkers. Then they convened people in a “World Café,” an engagement exercise in which people from different perspectives sit at a table and must come to agreed-upon recommendations on a topic.

“It was from that that we picked the best ideas and so it really came from all sides of the housing sector rather than pitting them against each other,” she said, acknowledging that she had to convince some to buy into the process because bureaucracy is not always amenable to novel approaches.

She cited two particular areas that she wants to “kvell about.” BC Housing, the agency that develops, manages and administers a range of subsidized housing in the province, is building housing on First Nations land.

“The feds, I don’t think, are building a lot of Indigenous housing and they’re supposed to,” she said. “No other province has stepped up to do that.… You’re a British Columbian and you need housing … if it’s land on reserve, it’s land on reserve – we’ll build housing.”

By providing housing in First Nations communities, it also helps people remain at home, rather than moving to the city, where housing is even more expensive and possibly precarious, she said.

The other point of pride is, Robinson admitted, “a geeky piece of legislation.” When she stepped into the role as the government’s lead on housing availability and affordability, she recognized that there is no data on what kind of housing exists and what’s needed.

She brought forward legislation that mandated local governments to do a housing needs assessment every five years to identify whether more housing options are needed for different age groups and types of families.

She also cited the government’s development of social housing, through the allocation of $7 billion over 10 years to build 39,000 units. So far, 25,000 units are either open, in construction or going through the municipal development process.

Every Friday, Robinson lights Shabbat candles and then shares a reflection on social media about her week.

“Lighting the Shabbat candles just grounds me in my identity,” she said. “I make myself take 10 minutes on a Friday at sundown to stop and to clear my head and to remind myself why I do the work. It’s not for the pay. It’s not for any of that; it’s not worth it. It’s who I am, what are my values and what’s important to me? What did I hear this week that reminds me of why this work is important?”

Robinson admitted she’s being partisan in saying that she believes NDP values are Jewish values.

“From my perspective, taking care of the world – whether it’s the environment, the people and all that’s within it – is our collective responsibility,” she said, adding with a laugh: “I think all Jews are New Democrats who just don’t know it yet.”

George Heyman, minister of environment and climate change strategy, is seeking reelection in the riding of Vancouver-Fairview. He is a son of Holocaust refugees, who escaped the Nazis with the help of Chiune Sugihara, the Japanese diplomat in Lithuania who illegally issued visas to about 6,000 Jews, many of whose descendants now live in Vancouver.

In 2019, Heyman took a family trip to Poland, which broadened his awareness of his family’s history and where he met family members he never knew he had. The Independent will run that story in an upcoming issue.

Speaking of his record in government, Heyman expressed pride in bringing in CleanBC, which he calls “a very detailed, independently modeled set of measures to get us to our 2030 target and beyond.”

He also said the government “completely revamped the province’s Environmental Assessment Act, incorporating the principles of the UN Declaration of the Rights of Indigenous Peoples.”

Collaborating with the First Nations Leadership Council, the government adapted the legislation to bring in affected local communities at the beginning of a project, before a proponent spends millions of dollars then has to go back to the drawing board due to local concerns.

“We’ve been investing in clean technology, we’ve approved transit plans that were stalled for years that the mayors of Metro Vancouver thought were critically important,” Heyman added. “We’re going to see the Broadway [SkyTrain] line commence to relieve the tremendous congestion on the Broadway corridor, both on buses and on the roads. And we’ll be working on ultimately being able to work with UBC and the city and the federal government to extend that to UBC.”

The government, he said, updated the Residential Tenancy Act to address tenants who were being threatened with eviction for suspect renovations and that saw people getting notices of rent increases as high as 40% because of loopholes in the act.

“We closed those loopholes, we held rent increases to the cost of living unless there is a legitimate demonstrated need to do renovation and repair and it’s fair to receive some compensation rent to pay for that,” he said.

Like Robinson, Heyman cited the construction of affordable housing, as well as supportive housing, to get homeless people off the street and provide them with services they need. He said the government has created 20,000 childcare spaces in the province “with significant fee reductions for families as we work our way toward a $10-a-day program.” Increased staffing in schools, mandated by a Supreme Court decision during the previous regime, is also an accomplishment, he said, as well as adding more investments in new schools for seismic upgrades, fire safety and heating and ventilation systems.

On the opioid crisis, Heyman acknowledged a surge in deaths since the beginning of the pandemic. “While there is much more to do, we managed to flatten the level of deaths up until COVID hit,” he said.

Also parallel to the pandemic was a realization of “the terrible state of many of our long-term-care homes.”

“We saw that deteriorate under the previous government,” he said. “With COVID, we saw the results of that. We saw people dying because workers were having to go to two or three different care homes, increasing the risk of infection, simply to cobble together a living. We took measures to allow our healthcare workers to work in one institution without suffering the loss of pay and we’re also investing in more beds and more equipment for long-term-care homes.”

New Democrats have been governing in a minority situation with the support of the Green party since 2017. Horgan called the snap election on Sept. 21, facing criticism for breaking fixed election date legislation and going to the polls during a state of emergency.

While there were signs that the New Democratic Party’s rank and file were somewhat ambivalent about Thomas Mulcair’s leadership, the magnitude of the party’s rejection of him Sunday was stunning. Fully 52% of delegates to the party’s national convention in Edmonton voted for a leadership convention, in effect ousting Mulcair as leader.

The NDP, having almost never been a serious contender for government, has generally been accepting of a leader’s inability to win federal elections. But never had the party been so tantalizingly close to power as it was after Jack Layton’s 2011 result, which catapulted the party into official opposition for the first time. In last October’s election, under Mulcair’s leadership, the party returned to its historic levels: a poor third place.

Mulcair’s ability to remain as head of the party after that showing was destined to be a challenge. Many New Democrats never viewed Mulcair as ideologically pure, coming as he did from the Quebec Liberal party. He became leader in part because many believed he had the experience and capability to build on the Layton legacy and lead the NDP into government for the first time. His failure last October to realize that dream was, in retrospect, the end of the story.

The coup was fairly bloodless. There was little overt campaigning against his leadership and each delegate seems to have made their individual decision, which led to a collective rejection unprecedented in federal politics.

In his short speech to the delegates after the vote results were announced Sunday, Mulcair urged the party to come together in unity behind whoever is to replace him. Yet that seems like extraordinarily wishful thinking.

Mulcair, because he embodied the prospect of electoral success, was able to keep a lid on some of the most extreme elements in his party, including the far-left and the anti-Israel extremists (between which there is a great deal of overlap). At the convention that ousted him, the party gave a thumbs-up in principle to the so-called Leap Manifesto, a hard-left document that could probably guarantee electoral failure for a generation. The party also divided sharply between those who see climate change as a priority challenge and those who believe the party must continue to support workers above all, including those in the host province of Alberta whose industries often contribute to global warming.

So, the question may not be whether the party will now take a left-leaning lurch, as the U.K. Labor party has done, or whether it will pursue the more pragmatic path set by Layton and Mulcair, but rather whether the hard-core leftists and the pragmatic centrists can coexist at all. Especially with the Liberal party sucking the air from the centre-left of the political spectrum, whether the NDP can maintain any sort of cohesion is a bigger question than who will be the next leader.