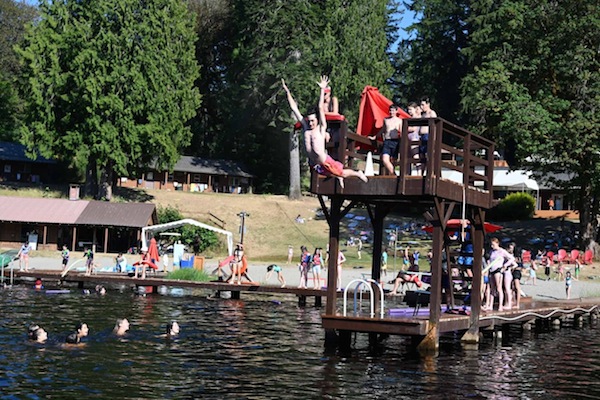 The pandemic and its restrictions on socializing greatly affected kids in particular. Being together at school and at camp gives children the chance to practise being in community and build skills around dialogue, collaboration, connection and identity. Without face-to-face interactions, in-person education and events, physical touch and their relationships, they have struggled to stand up for themselves and build the confidence they need to make their own decisions and truly find out who they are. Especially with how much social media and celebrity culture influence kids to try the latest trends to be part of the in-crowd, many of them are losing their own self-worth and misinterpreting their identities.

As many camps and groups for young people do, Camp Solomon Schechter values each child as an individual, and strives to support their social, emotional, physical and spiritual growth. At Solomon Schechter, campers have the opportunity to practise independence by choosing their own chuggim (activities) and making their cabins their own through spirited chants or personal artwork. Campers can do all of this in a safe, nurturing environment and find their passion to do what makes them happy, whether it’s arts and crafts, sports, nature or musical theatre. Every camper is encouraged to risk a little (but not without guidance and protection from counselors), embrace imperfection, try something new, connect and make new friends, make choices that support their community, and grow as leaders and good citizens of the world.

For summer 2023, Camp Solomon Schechter is making an even greater and more intentional effort to praise perseverance and inspire confidence in our campers to help them discover themselves. All of the programming this summer will be infused with key curricula that will teach campers how to set goals, show love, explore their feelings and emotions, find new activities they can be passionate about, and develop skills they can bring back home and use in life outside of camp.

One of the newest programs, started last summer, was the middot (values) system, which includes values such as compassion, respect and teamwork. This was designed to show campers the 10 values that members of the Camp Solomon Schechter community uphold. Each value corresponds with a coloured bead, and a camper received a bead from a counselor when they displayed one of the 10 values. Each cabin of campers collected their beads in a jar and, once they reached 25 beads, they received an award.

“We’re immensely proud of this program and the campers who displayed these values all throughout the summer. We believe that this program and others are crucial in developing confidence,” said Zach Duitch, Camp Solomon Schechter executive director. “We know that they will treasure these values and take them with them as they grow and begin participating in the community at large. We can’t wait to bring our middot program back to camp this summer and see how our campers have used these values outside of camp.”

During the afternoon of Character Day, King David High School hosted a fair at which students could learn about – and sign up for – volunteer positions in the Jewish community and around the city. (photo from KDHS)

On Sept. 22, King David High School students celebrated Character Day. It was a day for both quiet introspection and animated group discussions about what makes human beings tick, and how we can reach our full potential, individually and as members of society.

KDHS is “committed to integrating tikkun olam into all students’ experiences, both during the school day and beyond,” said visual arts teacher Wendy Oberlander. And Character Day dovetails neatly with the school vision for students’ social-emotional learning.

Character Day began 10 years ago as the brainchild of San Francisco filmmaker Tiffany Shlain, whose work in film and technology has been recognized with numerous nominations and awards. Her new mission is Let It Ripple, which uses film as the medium to educate and inspire children to become activists pushing for positive social change. The program is massive, reaching 24 countries as far-flung as Mexico, India and Australia. Approximately 75,000 events were hosted, worldwide.

“Character Day presented us with a frame within which to launch this year’s service program,” said Oberlander.

At KDHS, the day started with three of Let It Ripple’s videos, which were seen by every student.

Lu Winters is the school’s social-emotional counselor. She is leading the school in a year-long project based on middot (character traits).

According to Winters, the Let It Ripple videos – The Science of Character, The Adaptable Mind and The Making of a Mensch – nurture self-knowledge, encouraging students to take what she calls “an inventory of themselves.” The films ask, “What are your strengths and which do you want to develop?” exploring qualities like creativity, humility, self-control and gratitude.

According to KDHS’s e-newsletter, “The central idea of character traits that is described in the film The Making of a Mensch will form the basis for TAG [teacher advisory groups] this year.”

Character Day is now an established fixture for the students of KDHS. It has grown and evolved over the six years that Winters has taught at the school. Since joining the staff, she has seen a move toward a richer and more inclusive and varied program of offerings. She described an array of sporting, spiritual and drama activities, as well as support groups for LGBTQ students.

This Character Day, Winters sat in with two classes to see how the activities were being received by the students. “They were really engaged,” she said.

“They said it is always easy to dismiss buzz words, but instead of brushing off words like honesty and generosity, they talked about being self-aware, about being a better person; they responded sincerely and thoughtfully,” said Winters.

During the afternoon, the school hosted a volunteer fair organized by Ellia Belson, director of Jewish life and events. At the fair, students could learn about – and sign up for – positions in the Jewish community and around the city. Booths were hosted by the B.C. Society for the Prevention of Cruelty to Animals, Ronald McDonald House, Louis Brier Home and Hospital, Vancouver General Hospital, Canadian Jewish Political Affairs Committee and the Walking School Bus.

The impact of the program came across loud and clear, in conversation with the kids themselves. They expressed their enthusiasm and drive for positive change. Inbar ben Moshe, in Grade 11, said the day was “inspiring!”

“It opened our minds to how we can improve our lives and the lives of others,” she said, and spoke of a determination to “really work on myself, to embrace the different aspects of myself.” She wants to volunteer by mentoring children, helping them to resist peer pressure and make good decisions.

A Grade 10 student, who chose to remain anonymous, spoke about his own struggle with stress and the importance of learning to regulate one’s emotions. “It was interesting and it really influenced me,” he said. “It encourages people to think beyond what they already know; to get rid of stress by focusing on what you are good at.”

Sappir Gini (Grade 10) already reads to her nine-year-old brother and spoke of her ambitions in forensic science. She found the videos “inspiring, they made me want to learn more…. We saw how a bunch of people can come together and change things, people who are so eager, so curious – they can really make a difference.”

Sappir’s goals have crystalized as a result of participating in Character Day. She talked about her love of reading history books, and how she aims to be a reading mentor in inner city schools. Summing up the spirit of Character Day, she said, “Your imagination can take you anywhere – once you can read, you can do anything.”

Shula Klinger is an author, illustrator and journalist living in North Vancouver. Find out more at niftyscissors.com.