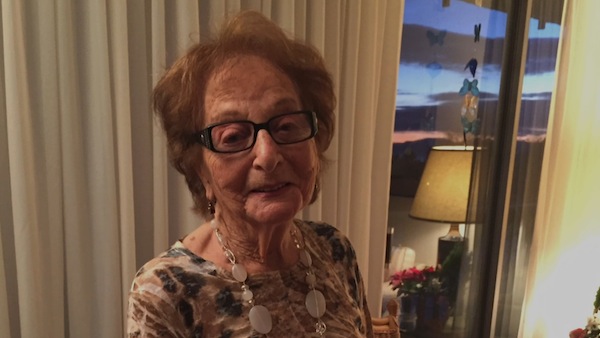 Goldie Kassen, who turned 100 on Aug. 12, was fêted by family and friends from across Canada and around the world.

“My entire family was here for my birthday,” she told the Independent over the weekend. That includes two sons from Vancouver, another son from Alberta and a daughter from Israel, as well as 13 grandchildren and seven great-grandchildren. In all, about 40 fully vaccinated guests celebrated at the home of son Dr. Barry Kassen.

“A lot of the children of my friends were there,” she added. “My friends are gone, but their children came from Calgary, Montreal.… I had a lot of out-of-town people.”

Kassen was born in D’Arcy, Sask., in 1921. While there were a number of Jewish farm colonies during that era in Saskatchewan, D’Arcy was not one of them.

“My parents were the only Jewish people there,” she said. “My father came to Canada in the early 1900s. He went to Montreal. He worked there for awhile, then he heard about this land that he could get, so he went out to the land with an axe and a hammer and made his start there. Then my mother joined him about four years later.”

The couple had met and married in the area just outside Kiev, Ukraine. “The town was destroyed during the Holocaust – and the people,” said Kassen.

While the family fled Europe well in advance of the Nazi era, they nevertheless experienced tragedy. A daughter in Ukraine died of pneumonia at three months of age. After the migration to Saskatchewan, another daughter also died of pneumonia, at age 10. That left one son, but then came another son and, finally, Goldie.

“I had wonderful parents,” she recalled. “We lived off the land. What we grew, we ate. We didn’t have money. My mother had a huge garden and we ate everything that she grew. My father, of course, eventually got cattle, so we had our own beef. We just lived off what they produced. There wasn’t any money for extras.”

Her father was handy with carpentry and built the elementary school in D’Arcy where Goldie got her primary education. The building still stands, she said, but it is now used as a church.

There was a high school in D’Arcy, too, but it was six miles from the farm, so Goldie moved to Winnipeg, where her elder brother, 13 years her senior, and his wife had set up home. She graduated from St. John’s Technical High School, then returned to the farm. She wanted to go into nursing, but her father said there was no money for a three-year program, so she enrolled in a business course in Saskatoon.

For four years, she was a stenographer for a lawyer.

“I met my husband during the war years,” she said, referring to Abraham Kassen. She and other members of her Jewish youth group would be bused to dance halls to attend events for soldiers stationed nearby. “I met him at one of these dances,” she said.

“He was working in a store called Adilman’s in Saskatoon. It was a huge department store.”

Although the store closed in 1974, the building still stands in Saskatoon and is recognized as one of the city’s finest remaining examples of Streamline Moderne architecture – think art deco rounded corners and sleek silver accents.

“He was the head of the shoe department,” said Kassen. “Eventually, he became the manager of the whole store.”

The couple had twin boys, then another boy and finally a daughter.

“My children all did well for a mother who came from …” she paused and began to laugh, “I don’t know where.”

After raising her family, Kassen was asked by the Saskatoon Jewish community to become the local representative for JIAS, Jewish Immigrant Aid Services.

“The [Jewish] Russians were coming out of Russia in 1979 and they needed someone in Saskatoon,” she recounted. “I met them at the plane and I found places for them to live, I found jobs for them, I took their children to register for school. I settled over 100 Russians in Saskatoon.”

Even though her parents were from the Russian empire, she didn’t know much of the language to ease the work of settling newcomers. “I know two words,” she said, again with her quick laugh.

Abraham died in 1986 and the two sons who live in Vancouver (both doctors) convinced her to move to the coast.

Any regrets about the move? “Never.”

Kassen didn’t know much about Vancouver or the Jewish community here when she arrived. But she did know a number of people from Saskatoon who had retired to the Louis Brier Home and Hospital. So, she walked in and volunteered shortly after arriving in town in 1988.

“I have to have something to occupy my time,” she said. “I worked there for over 25 years. Thirteen of those years I was the manager, the buyer and the bookkeeper of the gift shop.”

Her imprint on the gift shop was very personal. In addition to serving as a sort of tuck shop where residents can buy a chocolate bar or odds and ends, Kassen stocked it with collectibles she assembled from around Metro Vancouver and much further afield. Her frequent trips to Israel resulted in suitcases filled with kippot, tallitot, seder plates, mezuzot and other Judaica and tchotchkes that she thought shoppers might like.

Her time at the gift shop came to an abrupt end on Feb. 4 last year. With the emergence of the COVID pandemic, and on the advice of her MD son, she decided to close up shop. “I didn’t realize at the time that it would be the end,” she said.

The energy she devoted to the gift shop has not dissipated. “I still bake my own bread,” she said. “I gave away about eight challah on Rosh Hashanah. I’m always baking and cooking. I’m happy.”

The Independent spoke to her Sunday, just before she put a leg of lamb in the oven for family guests.

Phyllis and Michael Moscovich have been friends with Goldie since she arrived on the coast. Michael went to B’nai B’rith camp in Alberta with the Kassen boys.

“Her outlook on life is just always positive,” said Phyllis. “She just seems to take everything as it comes and to be cheerful all the time and positive all the time. I think that is who she is. She makes everyone around her feel good. Every time she comes to me for a meal, she brings something homemade with her. She cooks and bakes more than I will do in my lifetime, with ease. She just does it. That’s just who she is.”

Asked the inevitable question about the secret to longevity, the centenarian credits a healthy start and a refusal to settle down.

“I think the fact that I grew up eating from the earth, no toxins, everything was pure, I think that  gave me a good start,” she said. “I’ve always kept myself busy volunteering. I have to be busy. I can’t just sit and sleep. I have to be doing something or making something. I have a determination to keep going and I’m going to work on the next hundred now.”

Michael and Phyllis Moscovich in Cuba. (photo from Jewish Federation of Greater Vancouver)

When community lay leaders Michael and Phyllis Moscovich were planning their most recent mission trip, they never imagined discovering Jewish ties to former Cuban president Fidel Castro, and the vibrant community that exists on the island.

Michael, a committed volunteer with Jewish Federation and a board member for several years, is currently a member of Federation’s Israel and overseas affairs committee, as well as its Partnership2Gether committee. He and Phyllis also jointly chair the Ethiopian students internship program. The couple’s shared passion for travel and interest in Jewry across the Diaspora has motivated them to participate in nine previous Federation missions. Last October, they participated in their first American Jewish Joint Distribution Committee (JDC) mission to Havana, with a group of like-minded community members from North Carolina.

“I wanted to see Cuba before the regime changed and am always interested in Jewish communities elsewhere,” explained Michael.

JDC missions provide participants with a highly personal perspective on daily life for Jews and others in more than 70 countries in which JDC operates.

Cuban Jews have lived on the island for centuries, some tracing their ancestry as far back as the late 15th century to “anusim” who fled the Spanish Inquisition. In a February 2007 story, the New York Times estimated that there were about 1,500 identified Jews living in Cuba, most of them (about 1,100) living in Havana. The article added, “This small Jewish presence [in 2007] is in stark contrast to the bustling community that existed before Fidel Castro came to power in 1959. In those days, there were 15,000 Jews and five synagogues in Havana alone.”

JDC’s re-entry into Cuba in 1991 has sparked a Jewish resurgence on the island and a growing awareness of the community and its rich history. As it does elsewhere across the globe, JDC, in partnership with the local community, provides assistance to Cuba’s Jews, develops Jewish leaders and has prompted a revitalization of Jewish life. Working with JDC, the community has established a Jewish summer camp, adult education, an Israeli dance festival and communal holiday celebrations.

The mission visited all the operating synagogues in Havana, the Jewish cemetery and all the major tourist sites. “We met several times with members of the community, highlighted for us by a lunch with an unassuming fellow who spoke little English,” shared Michael. “By the end of lunch, we had determined he had been Fidel’s personal bodyguard for over a decade.”

One of the more surprising revelations of the trip for Michael and Phyllis is that there never seems to have been overt antisemitism in Cuba. “Fidel never even knew our guy was Jewish, until he attended a Chanukah celebration at one of the synagogues where one of the members mentioned that his bodyguard was a synagogue member,” Michael remarked. Also noteworthy is the fact that the young people are allowed to make aliyah, when almost no one else is allowed exit visas.

The opportunity to immerse themselves in the community was enlightening. “My expectations were all met. Seeing Havana, [getting a taste of] the regime, getting a sense of what 45 years of communism can do to an otherwise colorful and vibrant country,” said Michael. More remarkable from his perspective was “seeing the Jewish community and how it is sustaining itself.”

Michael and Phyllis took away with them enduring memories of the tenacity of the Jewish community and the vibrancy of the entire population, despite the hardships the regime has brought on its people. “It was great to travel with similarly committed Jews, to see the great work JDC has done, to meet our brethren, to see again what communism does and doesn’t do, to see it crumbling however slowly,” Michael explained. “The experience re-confirmed my personal commitment to the community, here and overseas.”

Federation invites you to participate in a mission trip to Vienna, Budapest and Israel, with mission chairs Anita and Arnold Silber, from Oct. 11-22, 2015. Visit the Israel and Overseas Experiences page on Federation’s website (jewishvancouver.com) for more information about opportunities to visit Israel and experience Jewish life in communities around the world. You can also donate to this year’s campaign via the website.

– This article was originally published in eYachad, and is reprinted with permission.