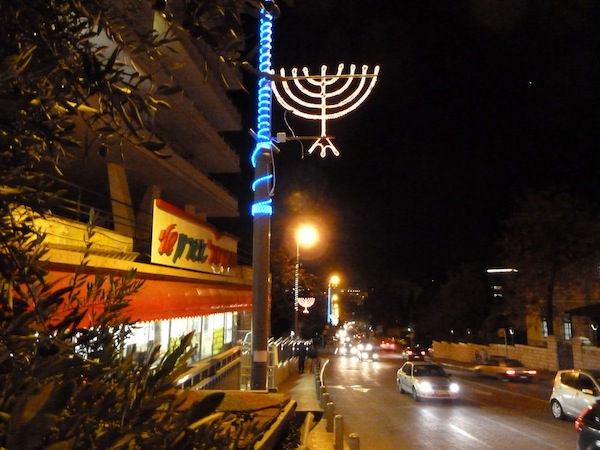 Chanukah lights on Agron Road in Jerusalem, 2012. (photo from Djampa)

History tends to repeat itself or, as Sholem Aleichem put it, The Wheel Makes a Turn. In this story, he wrote about Chanukah, depicting a proud Jew lighting the nine-branched candelabrum, celebrating this festival of dedication and liberation with warmth and affection. Later in the story, this same Jew, now old and infirm, is barely allowed to light the chanukiyah by his assimilated son, while his grandson is not even allowed to watch. The story ends when the grandson is an adult, and celebrates Chanukah with his friends to the dismay of his “modern” parents who cannot understand why their son has rejected their assimilation and returned to his Jewish roots.

Chanukah is one of Israel’s favourite festivals, widely celebrated even by secular Jews. Unlike in the Diaspora, it doesn’t have to compete with the glamour of Christmas, with its shopping frenzy, Santa Claus, carols and other Christian symbols of the holiday, which can be very seductive, even to Jews.

In Jerusalem during the Festival of Lights, you can see chanukiyot and their tiny, multi-coloured candles on almost every windowsill and, at sunset, you’ll hear voices from quivering childish soprano to deep baritone, all singing “Maoz Tzur” (“Rock of Ages”). There is a candlelighting ceremony, as well as free sufganiyot (jelly doughnuts), in my local supermarket every evening for the whole eight nights, and a giant menorah burns atop the Knesset and many public buildings and water tower reservoirs throughout the country. Gifts are exchanged, children receive Chanukah gelt, often in the form of chocolate coins, and dreidels, spinning tops inscribed with the first letters of the Hebrew words for the phrase: “A great miracle happened here.”

The Zionist movement has used Chanukah as a symbol and historical precedent of national survival. The Maccabi sports organization was named after the Maccabees, who are the stars of the holiday, and it holds the Maccabiah Games every four years, just like the Olympics.

The singing of “Maoz Tzur” is a feature of the holiday with mysterious origins. The only clue to its composer is the acrostic of the first five stanzas, spelling out the name “Mordecai”; such naming was a common practice at the time and one used in a lot of zemirot (Sabbath songs). Many scholars believe the composer to be Mordecai ben Isaac, who lived in Germany in the 13th century.

There is a Chabad saying: “Song opens a window to the secret places of the soul.” It is hard to define what makes music specifically Jewish, and many categories exist, including Chassidic, Yiddish, Yemenite, Moroccan, Kurdish, Israeli, secular, religious … the list comprises a broad range.

There is nothing in Jewish law against creating new tunes for hymns. The Gerer Rebbe once stated: “Were I blessed with a sweet voice, I would sing you new hymns and songs every day, for, with the daily rejuvenation of the world, new songs are created.”

Rebbe Nachman of Bratslav wrote: “How do you pray to the Lord? Come, I will show you a new way … not with words or sayings, but with song. We will sing and the Lord on high will understand us.”

When we sing “Maoz Tzur” as a family, grouped around the candles, there is harmony of a special kind. The harmony is not just in the song, but in the sanctity and affection that binds the family and gives it a foundation as solid as a rock.

In painful times for Israel, which has seen so much suffering and loss throughout its history, it brings a measure of comfort to be able to recite the traditional blessing: “Blessed art Thou, O Lord our G-d, King of the Universe, who has kept us in life and hast preserved us, and enabled us to reach this season.” This year, amid the pandemic, the blessing resonates even more deeply. Happy Chanukah!