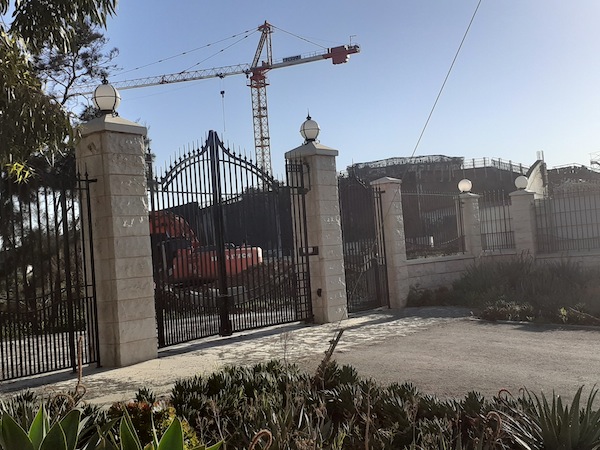 The construction site of the mausoleum for Bahá’í leader ‘Abdu’l Bahá, east of Haifa Bay, Israel. (photo by Gil Zohar)

Construction of Vancouver-based architect Hossein Amanat’s mausoleum for Bahá’í leader ‘Abdu’l Bahá (1844-1921) was set back when a fire on April 8 caused significant damage to the main building at the holy site just east of Haifa Bay, Israel.

The Iranian-Canadian architect’s design features a sloping geometric meditation garden rising in a sunburst pattern to form a dome covering the tomb. Amanat’s neoclassical Persian structure extends the Ridván Garden, which was a favourite oasis where ‘Abdu’l Bahá’s father, Bahá’u’lláh (1817-1892) – the founder of the Bahá’í faith – retreated after he was released from Acre Prison in 1877. The modest house in which he stayed during his visits there has been restored. After his father’s death, the Iran-born ‘Abdu’l Bahá’ popularized the new religion outside the Middle East in a series of visits to Montreal, and cities in the United States and Europe.

Amanat, 80, fled his native Iran after the 1979 Islamic Revolution and settled in Canada. He is best known for his Shahyad Freedom Tower in central Tehran, which was dedicated in 1972 to honour the Pahlavi dynasty. Following Iran’s revolution, the monumental 45-metre-high archway was renamed the Azadi Tower, after the square in which it stands.

Amanat also designed a series of Bahá’í administrative buildings on Mount Carmel, including the Seat of the Universal House of Justice, the Centre for the Study of the Sacred Texts, and the Centre for the International Counselors.

The April 8 blaze destroyed “several months of work” on the 2,900-square-metre circular platform and piazza, the Universal House of Justice (the governing council of the Bahá’í faith) said in an April 14 statement. Clouds of smoke billowed from the mausoleum, prompting firefighters to evacuate the nearby suburbs of Giv’at Hatmarim and Afgad.

The fire broke out when windblown sparks from welding on the dome ignited scaffolding and plastic forms being used to mold poured concrete, Ynet reported. The completed concrete walls and structures were undamaged, and the 250 million shekel ($77 million US) project – announced in 2019 – is insured, said the Universal House of Justice. The shrine and meditation garden are being paid for by donations from Bahá’í faith’s five million members around the world.

For the last century, ‘Abdu’l Bahá has been temporarily entombed in Haifa’s shrine of Siyyid ‘Alí-Muhammad Shírází (1819-1850), popularly known as the Báb (“Gate” in Arabic). Shírází was executed in Tabriz for apostasy after claiming to be the deputy of the promised Twelver Mahdi, or al-Qa’im. According to legend, the firing squad’s initial barrage of bullets failed to hit him, and a second team of shooters was brought in. As a Shiite heretic, his body was fed to dogs. It was rescued and hidden by believers.

In 1908, all Ottoman political and religious prisoners were freed by the Young Turk revolution. Newly released, ‘Abdu’l Bahá smuggled the Báb’s remains to Ottoman Palestine and built his iconic shrine midway up Mount Carmel, near where he himself was living. Its dome, visible from the Haifa harbour along the axis of the German Colony, was gilded in 1953.

The mausoleum and garden south of the Tel Akko archeological mound will be one of seven Bahá’í holy sites, ornamental meditation gardens and administrative complexes in a western Galilee pilgrimage route stretching from Mazra’a near Nahariya south through Acre (Akko in Hebrew and Akka in Arabic) to Mount Carmel in Haifa. The serene mausoleums of the Báb and Bahá’u’lláh – together with their adjoining gardens, characterized by their sacred geometry and immaculate landscaping – were registered on UNESCO’s World Heritage List in 2008.

The Bahá’í faith believes in progressive revelation – that God has revealed himself in a series of manifestations, including Moses, Jesus, Muhammad and, most recently, Bahá’u’lláh.

In 1863, Bahá’u’lláh fulfilled the Báb’s prophecies by proclaiming the Bahá’í faith. The new creed eventually evolved into a global religion. Exiled from Persia to Ottoman Baghdad and then the imperial capital Constantinople (today Istanbul) in 1868, Bahá’u’lláh was imprisoned in Acre’s Turkish citadel in remote Palestine. For Israelis, the notorious jail and its gallows are best known for the prison breakout on May 4, 1947, near the end of the British Mandate of Palestine, in which gunmen from the Irgun underground freed 27 incarcerated freedom fighters.

After being released from Acre Prison, Bahá’u’lláh moved six kilometres north to Mazra’a, also called Mazra’ih. Two years later, he settled in the Mansion of Bahjí (meaning “delight”) in Acre. That palatial home was built in 1821 by ‘Abdu’lláh Páshá, then the Ottoman governor of Acre. Bahá’u’lláh remained there until his death in 1892.

In addition to the mausoleums of the Báb and Bahá’u’lláh, Bahá’í pilgrimage sites in Haifa and the western Galilee on UNESCO’s World Heritage List include the Shrine of Bahá’u’lláh and adjoining Mansion of Bahjí and Bahjí Gardens in Acre; the Shrine of the Báb; the 19 terraces of the Bahá’í Gardens and Bahá’í World Centre in Haifa; and the House of ‘Abbud in the Old City of Acre, where the Bahá’u’lláh spent time after being released from prison.