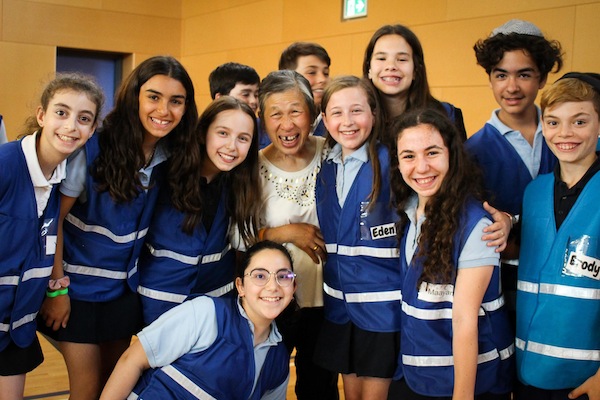 Since 2014, Vancouver Talmud Torah has offered a chesed (kindness) program to students in grades 3 and 6. Following requests from parents, the school introduced a mandatory chesed program for Grade 7s this year, which nurtures a commitment to volunteering and social justice.

And, this year, the initiative was pursued with a particular dedication, as students mourned the recent passing of Rose Dupaya, who worked as a custodian at VTT. She took ill last fall with cancer and died suddenly, which was a tremendous shock to the school community. In response, the students – who would often greet Rose with hugs – turned their grief into action.

When the Chesed Leadership Club heard about local woman Gia Tran, who takes refundable containers to a bottle depot every day to raise money for cancer research – more than $15,000 in 22 years – they were inspired. Following in Tran’s footsteps, the kids raised $2,000 from a bottle drive for cancer research.

VTT student Julia Andison expressed her gratitude to Tran for teaching her about personal agency. “Gia taught me that even a small act like collecting cans can make a big impact on others. And, as a chesed leader, I was able to communicate this to the younger students in our school, that every little bit counts.”

Students in the chesed club do not follow a curriculum. Unlike with subjects like math or language arts, the club was founded for students to explore their values and lead a program on their own initiative. As a consequence, the program’s success lies in the development of student ideas, teamwork and leadership.

“The minute you offer something optional and student-driven, it takes on a life of its own,” said Shoshana Burton, director of Hebrew (grades 5-7) and chesed programming at VTT.

Students are not admitted automatically to the chesed club. Instead, they submit applications and sign contracts. If they do not follow up on their commitment to leadership, they can be dropped from the program, which is both an opportunity and a challenge to the students’ organizational skills and a way to exercise their moral and management muscles.

All of the students volunteer as part of the program. Some do so once a week while others volunteer their help every day. Many organizations and communities have benefitted from the support of VTT students, including the Muslim Food Bank and residents of the Downtown Eastside.

According to their teacher, the success of the club is in its spontaneous, natural development. “You can’t know the end result when you start. You can’t plan in advance,” said Burton. “The students learn how to work as part of a team, learning to commit to a project.”

Student Celia Joffe spoke of the club’s impact on her. “Helping others gives us a sense of pride and responsibility,” she said. “The project with Gia was amazing because we ended up not only helping the cancer foundation and the environment, but we also made Gia feel special and acknowledged.”